It is the last day of April, the warm sunny month has given way to a cool overcast atmosphere and much needed rain (for the garden anyway).

The Lockdown continues…….or does it?  On a recent bike ride I crossed a bridge over the main route into Norwich and noted more traffic on the road than the last time I was there, which means more folk out and about.  I cycled back through Wymondham (pronounced Windham) and saw that more people were walking through the town centre despite only the Co-op supermarket, bakers shop and general store being open.  Are they walking through town as part of their daily exercise routine, wishing for the shops to re-open? Who knows.

Our walking tour of local churches continues, with another four added to the photo project.  For those with an interest in Norfolk Church architecture, they all appear to be of a similar design i.e a squat square tower at one end with an entrance door at the base, and a single storey structure for the main body of the church.  Sadly, the churches are all locked up so we can’t photograph inside.

We took in two churches in one walk, in adjacent villages, Morley St Peter and Morley St Botolph. The first church on our route was Morley Peter’s. It dates mainly from the 15th Century but was restored in the Victorian era.  It is remoted from the village it serves and is partially hidden behind trees and a hedge as you approach from a footpath to the north.

Four images of Morley St Peter’s Church:  Clockwise from Top left: Approaching from the footpath; The church and cemetery; Us in the church yard; View from the road.

The second church was at Morley St Botolph’s is set on what passes for a ridge in Norfolk, and is surrounded by flat fields.  It stands out in the landscape, and frequent readers of my musings may recognise it from earlier blogs. Parts of the building date from the 15th Century but the main part is Victorian.  It was destroyed by fire in 1959 and left a derelict ruin for several years. However, the graveyard here is shared by several nearby villages, so it was inevitable that the church was still needed, so it was eventually rebuilt in a similar style to the original.

The other Morley Church, named after St Botolph

The next church on our local list is St Andrews at Deopham (pronounced Deef’m).  The Norfolk Churches website describes Deopham as “a scattered parish in the deceptively remote hills to the south-west of Norwich”.  St Andrews sits close to the top of the hill with the village below it. According to legend there has been a church on this site since Norman times, although the main structure dates to the 14th Century. The tower is unusual in that rather than being a plain “block tower” this one is tapered in six stages to the top.  No one knows why, maybe the Stone Masons who built it were looking for a bit of uniqueness to stand out in the local area.

Scenes from Deopham:  Left: Horse Chestnut Tree; Right: A re-purposed village telephone box. This one is a store with a small supply of groceries available for village folk.  Outside is a tray of tomato plants.

The other day we embarked on our longest walk so far of about nine miles.  We had previously spoken to friends who have been out doing similar distances so we decided we could not be left behind.  I plotted a route from home, into Wymondham avoiding the main routes, then onward into a nearby country park, Kimberley Park,  The map through the park showed many tracks but only one public footpath, which oddly, ended outside the mansion of the same name. This is where the marked path ended on the map, though tracks were clearly marked.  On the ground there were signs saying “Private No Access”  Ignoring these, we walked on down one track and after a short encounter with a herd of very curious young bullocks, we crossed a small river and headed on our way back home.  En route we passed the last of our local churches, in the tiny village of Kimberley.

Scenes from our Kimberley walk.

St Peters Church Kimberley was part of the Kimberley Estate we had walked through, and the historical owners saw it as their duty to provide and maintain this church for the parish.  I do not know whether that commitment exists today.  The original church was constructed in the 12th Century and was rebuilt on the eve of the Reformation, the tower dating from the 16th Century. Some of the stained glass in the building dates from the 14th and 15th centuries. It was thought to have originated from Cologne Cathedral, having been donated to Kimberley church in the 19th Century by the estate owners.

Top: Hidden in the trees – Kimberley Church;  Bottom: Approaching from the road

Kimberley Church from the church yard

It is the day after the commemoration of the 75th Anniversary of VE Day, Victory in Europe. I have been listening to some of the testaments from those who came through the war to celebrate VE Day in 1945 and sharing memories of a momentous day in British history.  Old film footage shows the unbounded joy of no more war, people dancing in the streets, climbing lamp-posts for a better view of the scene and kids enjoying street parties.  All this joy was tempered with the knowledge that many did not come home.  One man who spoke, said he started the war as a young child with a mother and father, ended the war as an 8 year old orphan, having lost both parents during the conflict.  That was a particularly moving testament.

Our local village’s celebration were very low key, few houses decorated with bunting and the odd family sat in their front gardens enjoying the afternoon sun.  In nearby Crownthorpe, someone had made a silhouette of a soldier and attached it to the village sign close by, that was the most poignant commemoration of the weekend. 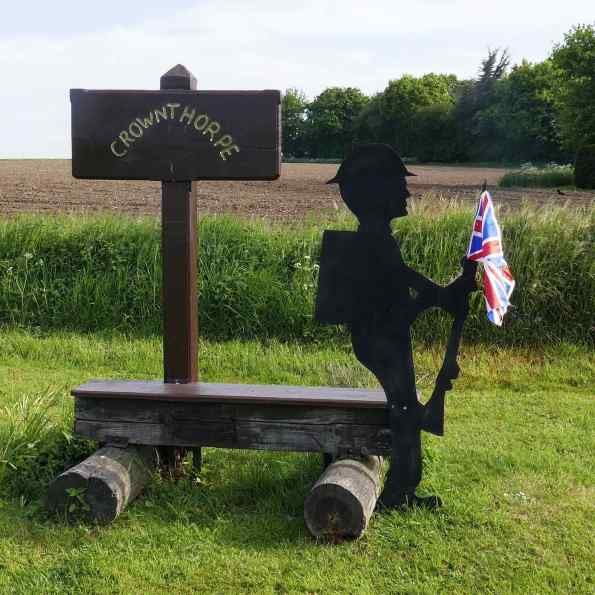 VE Day Memorial – Outline of a British Soldier in the village of Crownthorpe close by.

Finally, one of the joys of spring are the flowers, cultivated and wild. I have included a gallery of images from our garden and the verges and hedgerows close to where we live.