Having lost the best part of half a day through late arrival we had some catching up to do………sleep. We were shattered and in no fit state to make any decisions other than to sleep.

Early evening we felt alive enough to have a local walk to find somewhere to eat.  Our hotel is right on Clarke Quay which is alive with all sorts of restaurants and bars so we were spoilt for choice.  Here we planned what we would do for the next 3 days.

A brief history of Singapore.  One man stands out in its history, Sir Thomas Stanford Raffles who first discovered this tiny island in around 1849 and soon realised its potential as a far east outpost of the growing British Empire.  He died a bankrupt at the young age of 49, just as Singapore was beginning to develop as a major trading port. In 1942 Singapore fell to the Japanese following  their invasion and was  ceded to the British at the end of the war.  Singapore gained independence from the UK in 1963 and with increasing levels of self-government being granted, culminating in Singapore’s merger with the Federation of Malaya to form Malaysia in 1963. However social unrest and disputes between Singapore’s ruling People’s Action Party and Malaysia’s Alliance Party resulted in Singapore’s expulsion from Malaysia and Singapore became an independent republic on August 9, 1965.

The newly independent Singapore faced severe unemployment, and a major housing crisis so the government undertook a massive modernisation plan, establishing a manufacturing base, a large public housing programme and a first rate education system.  Some 85% of people in Singapore live in public housing. This plan continues today with the development of the Marina Bay area, built on reclaimed land which has increased the land mass of Singapore by 20%. Home to a number of huge modern buildings and the F1 Grand Prix street circuit, Marina Bay is rapidly becoming a major world financial centre.

The city has  an excellent hop on – hop off tour bus facility which runs past or close to all the major sights in the city, AND we got a discount by showing our Singapore Airlines boarding passes! So where to first? It had  to be the Botanical Gardens, free entry and a Unesco World Heritage site.  It is located on the northwestern  outskirts of the city in the very posh part of town and reachable by the bus.

The Gardens are tropical rainforest and include an Orchid Garden and a Healing Garden within its bounds.  Words cannot describe the trees, plants and layout, nor the beauty of the many orchid varieties so here are some pictures instead. 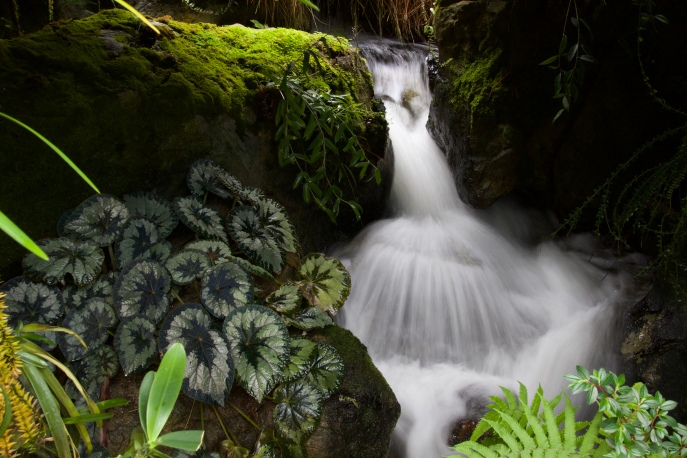 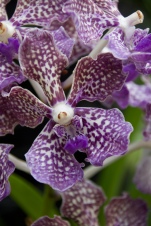 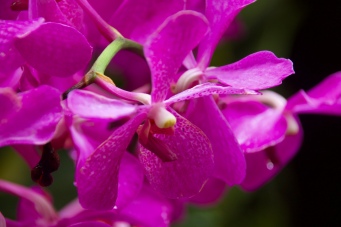 Part of every good garden anywhere in the world is a Water Feature and this garden is no exception.  Lyn spotted some of the local wildlife in the lake……..see the pictures below: 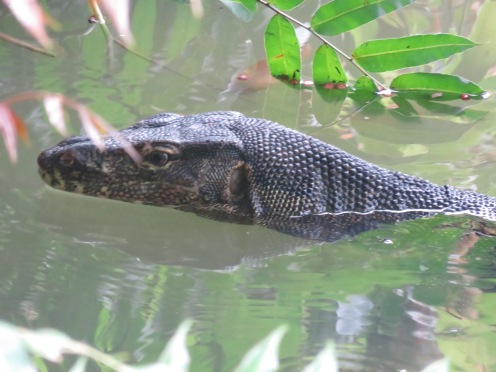 And one of us enjoying the wildlife!

After the gardens we hopped back on the bus and followed the route past various landmarks including the Orchard Road, 6km of shops and retail therapy for those afflicted that way.   The bus also took us through Marina Bay, the new development with futuristic buildings and mega high rents. Because all the land is reclaimed in this area, a 1 bed apartment of about 150 sq ft in one of the blocks on Marina Bay will cost around S$9,000 per month to rent. Eeeek.

A word now on eating out in Singapore.  Everywhere is expensive.  A beer costs around S$12 which is about £8 and we never paid under S$95 for a 2 course meal.  Even coffee is expensive.  There are numerous establishments serving a variety of European and Asian dishes but you have to be selective in order not to blow the budget.