“Ladies and Gentlemen, welcome to Cairns, where the local time is 1030am and the temperature is 34deg.”  So announced the Cabin Stewardess as we taxied in to the stand at Cairns Airport.  After a year of planning and a lifetime dreaming we are finally in Australia.  That was probably one of the worst flights we have endured.  Lyn, normally an anxious flyer anyway, went through purgatory for 6.5 hours.  Cramped cabin, turbulence, noisy and restless passengers and a lousy breakfast made for an unpleasant trip.  But we are here at last which is the best thing of all.  Thank you Silk Air.

A quick transfer to our hotel and the same routine of a quick trip out for a lunch then catch up on sleep then an early evening walk along the esplanade to find somewhere to eat.  We watched the sunset which was unusual as seen from the picture below. 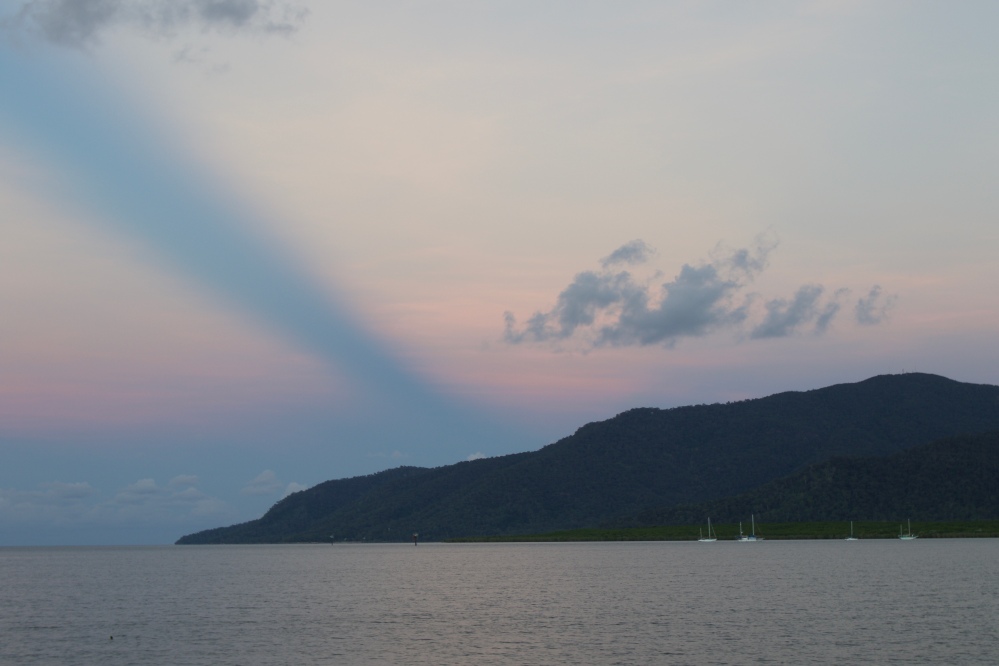 Note the blue streak of sky between the clouds. Very strange.

The first thing that struck us about Cairns is the space…….there is so much of it.  The wide roads with little traffic, tree lined streets and a wonderful long esplanade.  There is no beach, just mudflats and lots of birdlife when the tide is out. 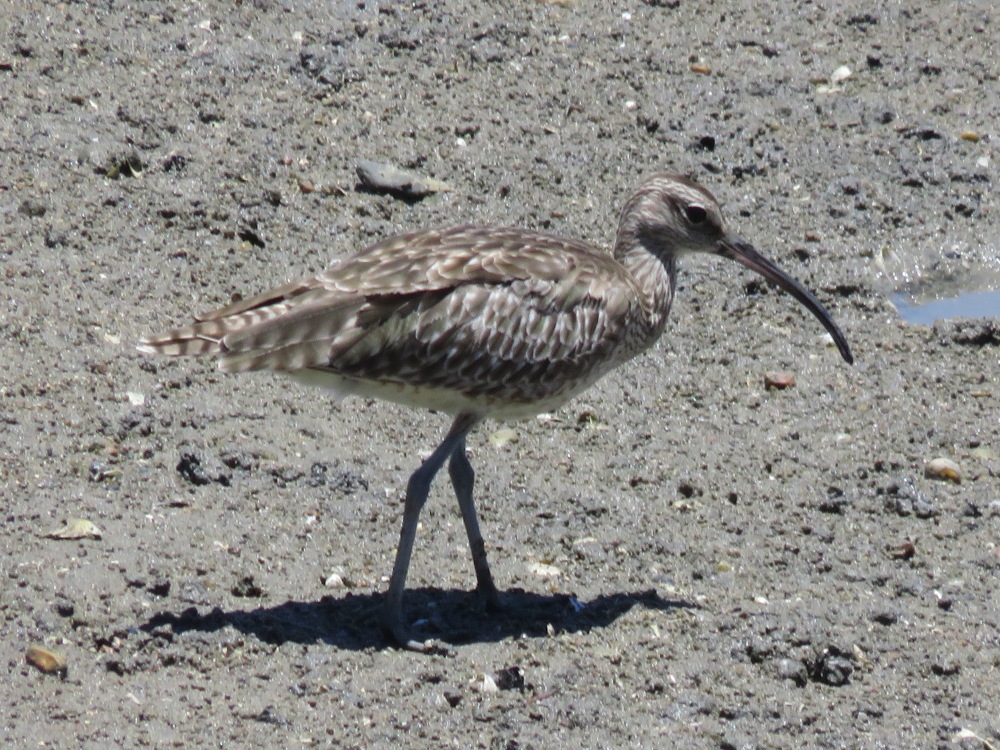 This place is geared for tourists.  There are tour shops everywhere all offering similar things, Kuranda, Great Barrier Reef tours, Daintree Rainforest and the Atherton Tablelands and Palm Cove, not to mention dive boats aplenty for the sub-aqua fans to experience the Great Barrier Reef. We have booked trips to Kuranda, Port Douglas and the Great Barrier Reef.  Sandwiched between that is Australia Day and the Chinese New Year. We thought Australia Day would be something special with day and night celebrations, but our hotel clerk described it as an excuse for an all day party, which ends at 6pm when everyone goes home.  Mind you judging by the number of people out on the streets after then it looked like the party was continuing in to the night.  Interestingly all restaurants and bars levy a 10-20% Australia Day surcharge on all transactions as it is a public holiday.  Can’t see places in the UK getting away with that one!

The Chinese New Year was on Friday 27 Jan 17.  we saw preparations whilst in Singapore, wth decorations being put up, like Christmas at home.  But Cairns seems to have been invaded by Chinese, all wanting to celebrate the New Year of the Rooster.  As with New Year celebrations there were people on the streets, and a  massive firework display.

Another thing Cairns is noted for is a population of large bats, known as Flying Foxes.  They roost in the tress on the side of the road in the main Business District and like all good bats they stir at dusk and start flying around the area feeding up.  They spend the night on the wing and can take in up to 40% of they body weight whilst feeding.

Kuranda – Our first trip out.  Kuranda is a village up in the Rain Forest to the North west of Cairns.  You can drive up there but to get the full effect you have a choice of Cable Car up and scenic railway down or vice versa.  We chose the cable car first option.  This propels you up to Kuranda in three stages, first to Red Peak Station, where you are invited to leave the cable car for a 20 min guided walk around the boardwalk in the rain forest.  The second leg is the longest at around 5km up to Barron Falls, which is supposed to be a spectacular waterfalls dropping over 200ft into the Barron River.  Well we were told the rains were late and it was more of a dribble than a gushing torrent.  Oh by the way, the monsoon rains arrived whilst we were in Kuranda.  The last leg from Barron falls to Kuranda is about 1.5 km, total distance by cable car about 7-8km.

Sky Rail  – On the way up to Kuranda 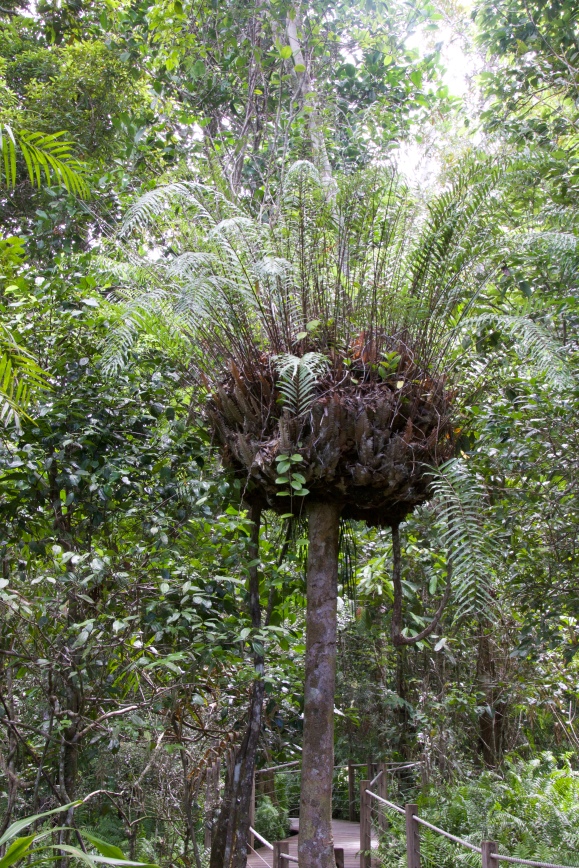 The village was sort of taken over by a hippy commune in the 60s during the flower power era (some readers may be too young to remember this) to live the life they wanted.  That sort of atmosphere still exists with market stalls and shops selling native artefacts and one or two modern ones…..I am sure an I-pad case would not have been much use in 1967, ahead of its time but not much use!  We had a lovely walk along the Barron River, seeing Cassowary and a large lizard which looked bit like a crocodile, but as they can’t climb trees and this thing did, we concluded it was not a crocodile! Oh and it rained. 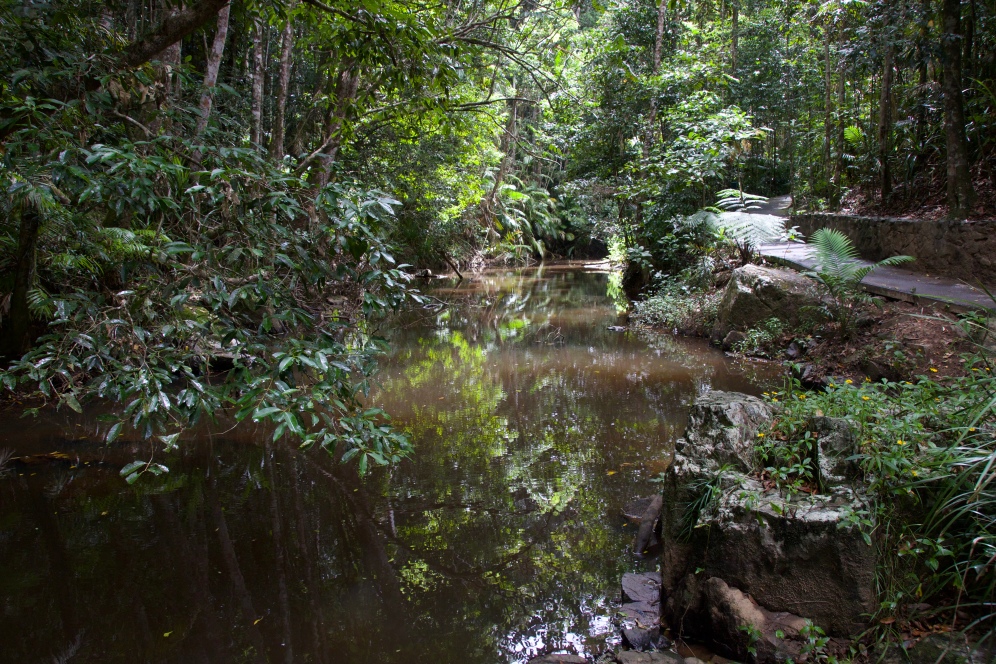 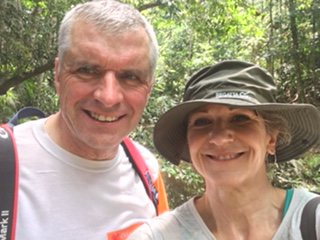 The return trip was via the Scenic Railway.  This is an historic railway dug and blasted out of the mountain to supply the gold rush in the 1890s.  It has 15 tunnels dug by hand through the mountains feeding a boom in the area during the Gold Rush and whilst the railway was being dug out.  It was used extensively during WW2 for troop transport and as a hospital train conveying wounded troops to hospitals in the mountains.  Today it is a single track railway tourist attraction and our means of transport back to Cairns. All the villages and towns developed during the boom and beyond are mostly gone now. 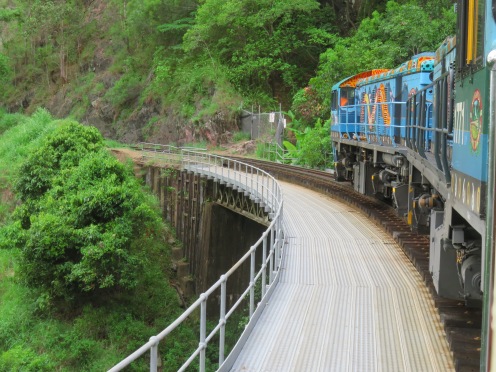 This was a slow but very interesting trip back right into Cairns Station.