That great chronicler of the Lakeland walks, Alfred Wainwright wrote in his Coast to Coast book……and I paraphrase, “this is the route I took, it is there for you or you can make up your own.  Don’t feel obliged to use my route.”

Little did he know (well I assume he did not) that there is another Coast to Coast, this one in Auckland.  Rather than 192 miles and a 14 day trek, Auckland’s version is a mere 16km (about 9 miles) and can be done in a day! I discovered its existence when I was researching our trip back in the summer and as it was achievable in 1 day we just had to go for it. 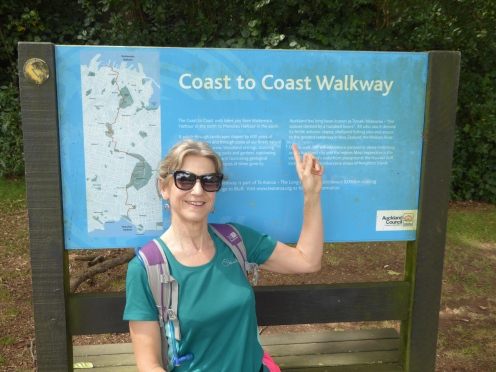 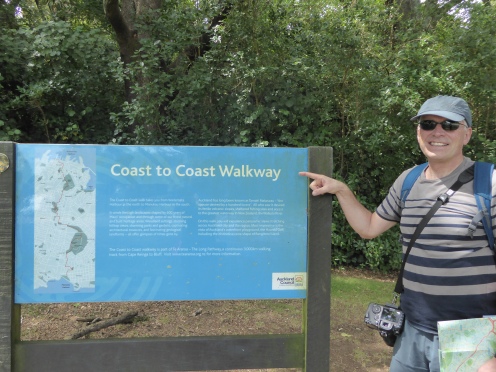 Us on C2C Auckland style – shortly after the start

Auckland’s version takes you from Waitemata Harbour in the north to Manuaka Harbour in the south, running through a number of parks and Maori sacred sites, ending in Onehunga to the south.  As the route ran close to our hotel we decided to intercept it and not slog down to the harbour through all the ongoing civil engineering works. (more of which later).  The first highlight was Albert Park, a small green space atop a dormant volcano in the centre of the city with beautiful flower beds and trees.  A peaceful and popular sanctuary from the bustle of the city. Leaving the park we followed a road route through the city to the Auckland Domain.  This wooded area climbs to the Auckland War Memorial and Museum.  On the way we paused for coffee at a small cafe and watched the local birdlife.  Young little sparrows perched close by on branches, oblivious to our presence or were they playing peekaboo?! 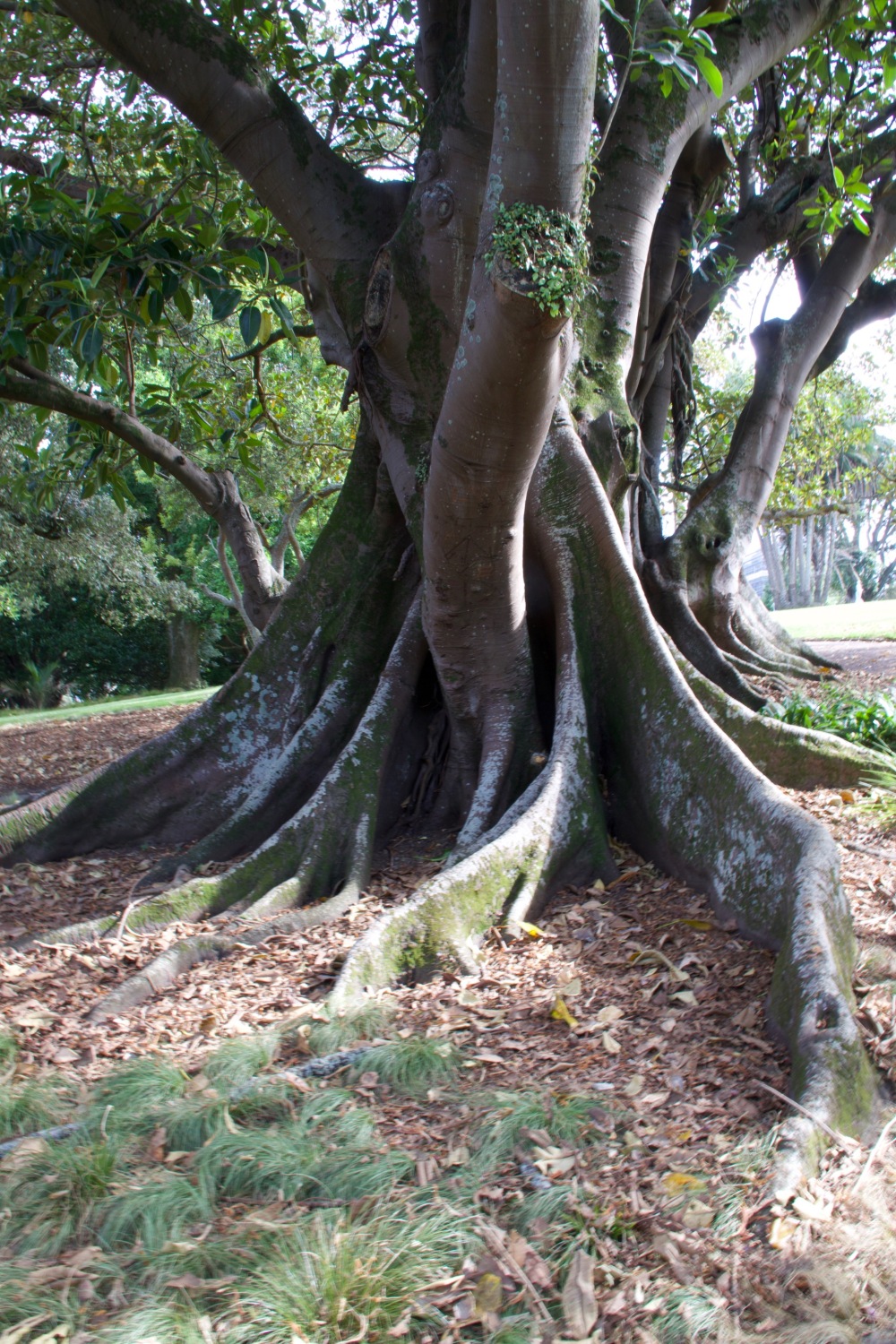 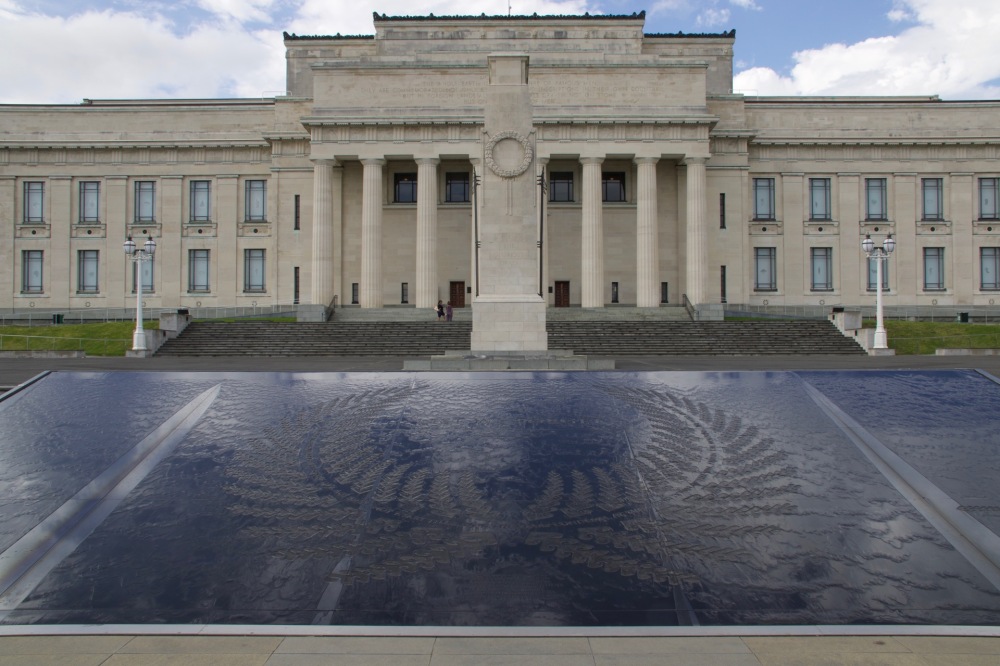 Time was against us so a visit to the museum was out of the question. (It was closed anyway) We paused briefly at the Cenotaph then walked, on leaving the domain behind.  The route wound its way through a residential area and started to climb.  Soon we were entering the sacred Maori site of Mount Eden or Maungawhau.  This is another dormant volcano, with grand views over the whole city.  The Sky Tower and Eden Park Rugby Stadium seem within touching distance from the top and the crater of the volcano, covered in grass can be clearly seen.  It was a steep climb up and down not helped by taking a wrong turn at some point and ending up in a very exclusive area of Auckland. 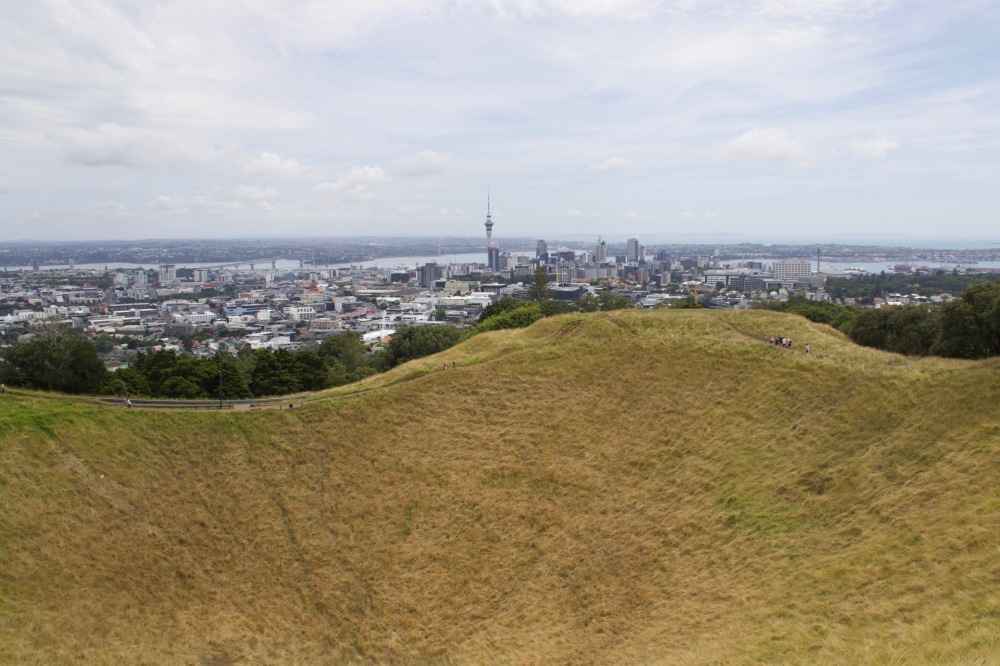 One more major site of interest on the route was the double park of Alexander and Cromwell Parks, separated by a busy suburban highway.  Alexander Park is essentially a massive sports field, whereas Cromwell Park is more undulating and natural, additionally being home to flocks of sheep and herds of cows (all behind fences).  Flat initially the path starts to climb to the final sacred site on the walk, namely Maungakiekie or One Tree Hill.  Named for obvious reasons there are in fact quite a few trees on One Tree Hill and the one tree referred to in its name has now been replaced by an obelisk. Incidentally, Auckland is built around 15 dormant volcanoes though there is a greater threat from earthquake activity.

One Tree Hill from Cromwell Park

From the southern exit to Cromwell Park,  the walk continues through a suburban area and ends rather disappointingly with no signage or ceremony outside a number of industrial units in Onehunga. A rather tatty end to a good walk.  A local (cheap) train carried us quickly back to the centre of Auckland.

In the title I noted “other walks”.  Whenever we visit a city or town we always try to take in a guided walking tour (we have even done one in Norwich!) Auckland is no exception so we joined our guide Julie for our guided tour of Auckland.

“Auckland has long been known as Tamaki Makaurau – “the spouse desired by a hundred lovers”. All who saw it desired it’s fertile volcanic slopes, sheltered fishing sites and access to the greatest waterway in New Zealand, the Waikato River” (Quote source unknown)

Again starting at the harbour front we learned how the harbour was built, we saw a statue of a Maori warrior, looking out to sea for visitors or invaders.  This figure is depicting draped in a full length cloak, masking  a club of local Greenstone,  “just in case!” We saw modern development in Britomart, a new public transport hub and retail area close to the harbour front with an underground rail system being built at the heart of this development.  The chaos this is causing as roads are closed or restricted access is immense but locals are assured it will be worth it when it finished.  (where have we heard that one before?) 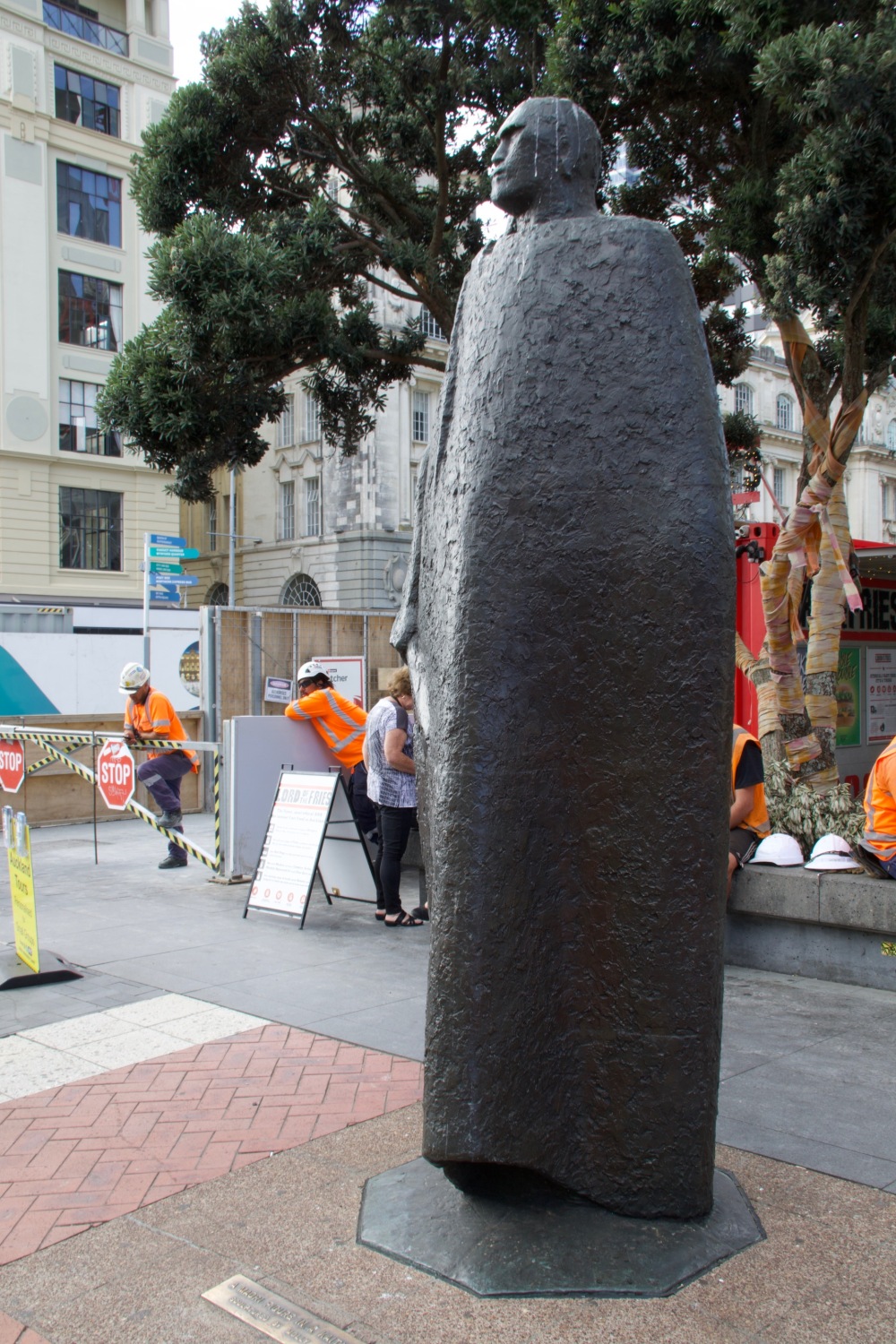 The new -Entrance to Britomart.  The cones are meant to represent the 15 volcanoes on which Auckland is built.  Look through the glass tops to see the railway below.  This lets the light in to the underground station.

As we walked on the streets became narrower and some of the buildings were obviously older, contrasting sharply with the modern, sometimes brutalist architecture that dominates the city centre area.  Julie, our guide , told us that many old buildings have been swept away over the last 20 years in the quest for modernity.  Some of those that remain still have the old frontage on the ground and first floors but then are transformed to modern fashions which makes them look a bit odd.  Several old streets remain untouched; one in particular has a modern electronic sculpture of red LED tubing running its length.  No prizes for guessing that this street in ancient times was home to many rowdy bars full of sailors and labourers off the boats all looking for beer, food and women, not necessarily in that order.  The old Red Light District still retains its mix of bars and restaurants but is much safer and the “Ladies of the Night” are long gone.

A short distance from this former den of depravity is Jean Batten Square and street.  Who was Jean Batten?  She was another hero of NZ, in  the same mould as Peter Blake.  Her passion was flying.  As a youngster she was a talented pianist, but at age 18 she decided to become a pilot after the Australian pilot Charles Kingsford Smith took her for a flight in his aircraft Southern Cross.  A move to London in the late 1920s saw her fulfil her flying ambitions, but this was not enough for her.  She made a number of attempts to break the record for a flight from England to Australia and finally succeeded in 1934, breaking Amy Johnsons record by four days.  If this was not enough in 1936 she became the first person to fly solo from England to New Zealand as well as other world record flights.  Her aircraft hangs in the ceiling of the arrivals terminal of Auckland Airport. 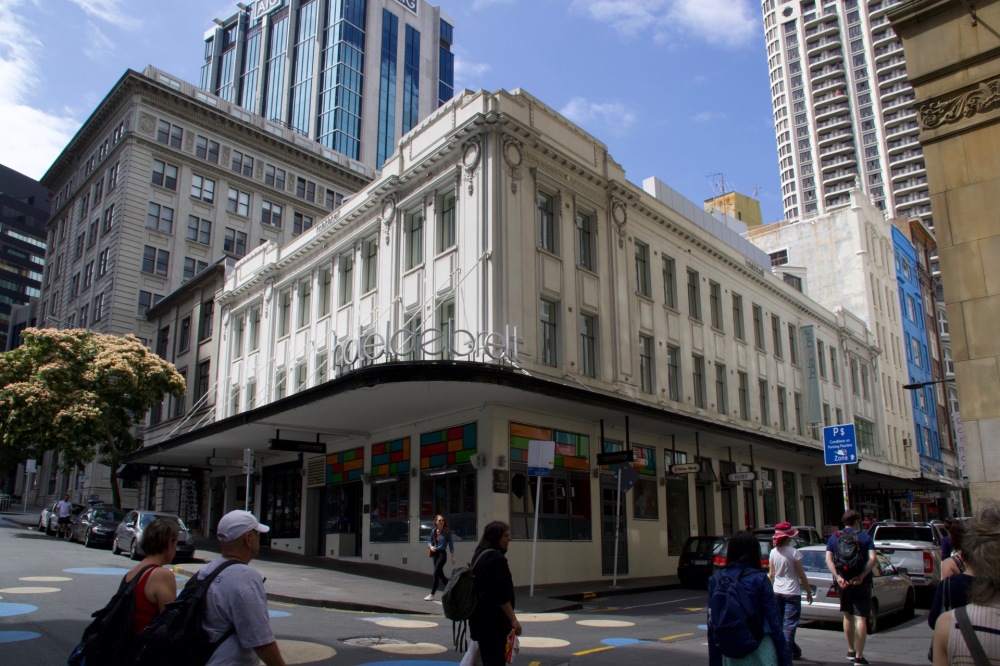 Jean Batten Place – the old and new buildings contrast……….or do they?

A view of the Sky Tower

Our next stop was at the Auckland Art Gallery, a modern glass building next door to the old gallery.  The reason for glass is that the gallery is built into the side of Albert Park and the construction of a solid building would block the view of the park from nearby offices and flats.  A glass building would maintain that view.

The glass frontage of the Auckland Art Gallery

This year marks the 100th anniversary of women in the UK being given the vote.  But the UK was not the first.  In 1893 New Zealand was the first country in the world to grant equal voting rights to women.  This is commemorated by a number of murals close to the library.  This shows how enlightened the New Zealanders were.  In the UK  a coalition government passed the Representation of the People Act in 1918,,  enfranchising all men, as well as all women over the age of 30 who met minimum property qualifications. In 1928, the government finally amended this act, giving the vote to all women over the age of 21 on equal terms with men.

Two Murals commemorating the granting of Women’s Suffrage in 1893

The walk continued through Albert Park onward to the Governor General’s former house, now part of the University of Auckland campus and through more back streets back to the harbour.  It was a fascinating 3 hours and the walk guide was excellent.  Although the walk was free, each walker is invited to make a donation or tip.  We have done several of these walks in cities we have visited and it is good way of learning about the place you are visiting.

Trees on the site of a former church.

By ‘heck that tastes good!

Lyn loves libraries and our trip to Auckland would not be complete without a visit to the city library.  It used to be located in a grand old building near the Art Gallery but it outgrew that venue and a number of years ago re-located to a modern concrete building close by.  She spent some time looking around and was particularly taken with a Dance exhibition.  This image reminded her of dancing round a pile of handbags or in this case, shoes!

Not a walk but an experience nonetheless is a visit to the Sky Tower.  It is Auckland’s boast that it is the tallest building in Australasia and they are always keen to get one over on their larger, brash neighbours.  At 328m high (over 1000 ft) it has 58 floors and it has a revolving restaurant at level 50, an observation platform at 51, a skywalk platform at 53, where you can also take a Sky jump.  This is where you are harnessed to two cables and you jump off a platform and arrive hopefully in one piece at the bottom some 25 seconds later.

The Skywalk is a 1.5 metre wide steel mesh walkway around the tower’s 53rd floor and to walk this you are harnessed to a cable and step out onto the platform.  Me?, I went to the Main Observation platform, took my pictures and admired the views all over the city.  The only disappointment was the lousy sunset. You can’t have everything.

Eating out is always an adventure when in a new place and Auckland is no exception.  Seafood restaurants are all around the harbour area (no surprise there) and there are many good and reasonable places to eat.  This is our favourite, known as Jack Tar, it made our last evening very pleasant indeed. 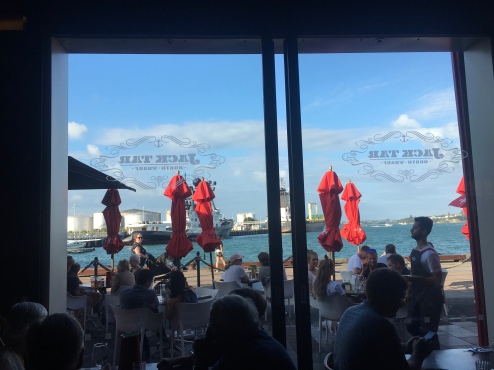 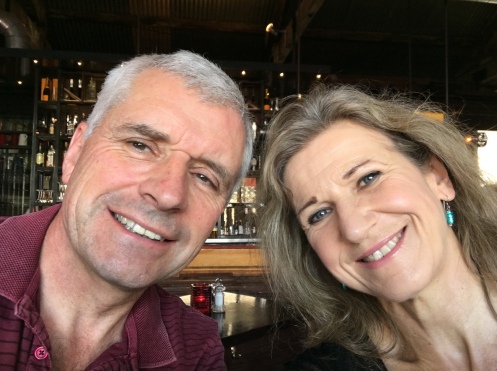 Inside Jack Tar’s looking out.  Us.

Saturday was our last full day in Auckland.  On Sunday we embark on an 8 week road trip across New Zealand.  Auckland is one of the friendliest and safe cities I have ever been in.  A delightful place to be.  I wish we could stay longer but the road is calling.