After the experiences of Fox Glacier it was time to journey south to Wanaka. Easy to say, but the consequences should you mis-spell it could be embarrassing. The weather was not doing us any favours either; what started as a clear sunny morning had rapidly degenerated to a grey cloudy drizzly outlook with the promise of some heavy rain before too long.

The route down to Wanaka was dead easy, State Highway 6 all the way.  What Satnav nor the “Maps” app on the I-pad tells you is the state of the roads. New Zealanders seem to accept with some resignation that their roads are not the best in the world, but with only 4.5 million people, and most of those on North Island I suppose it is a blessing that they are not crowded.  In the first part of the drive we encountered pot holes, bumps, lumps in the road, relaid surfaces without the tarmac top dressing (as noted in a previous blog) and countless narrow bridges.

We had been driving for a couple of hours before we stopped at little township called Haast for coffee. The cafe was a step back in time, reminding us of an old American bar from the 70’s with  American rock music from that era playing.  The menu looked straight out of the 70’s as well, with every type of burger you could imagine, and that 70’s icon, Black Forest Gateau. Music was good though.

Back on the road again and the weather had deteriorated. Dull drizzle had been replaced by lashing rain and as we drove into more mountains it got quite dark.  To add to the drama, a long stretch of road was under repair following what appeared to be damage from rock falls.  Again they had put down a temporary road surface the whole length of the work.  I presume at some stage in the future they will return and seal it properly.

However as is often the case here the rain was very localised and as we neared our destination, the clouds cleared, the sun came out and we were rewarded with fine views, first to the north end of Lake Wanaka then its very near neighbour, Lake Hawea.  These lakes sit almost side by side with the latter lying slightly to the north-east, with just a narrow strip of land between them, down which our road runs.  Wanaka sits at the southern end of the lake that bares its name and is the gateway to the Mount Aspiring National Park and a number of ski areas for the winter months. 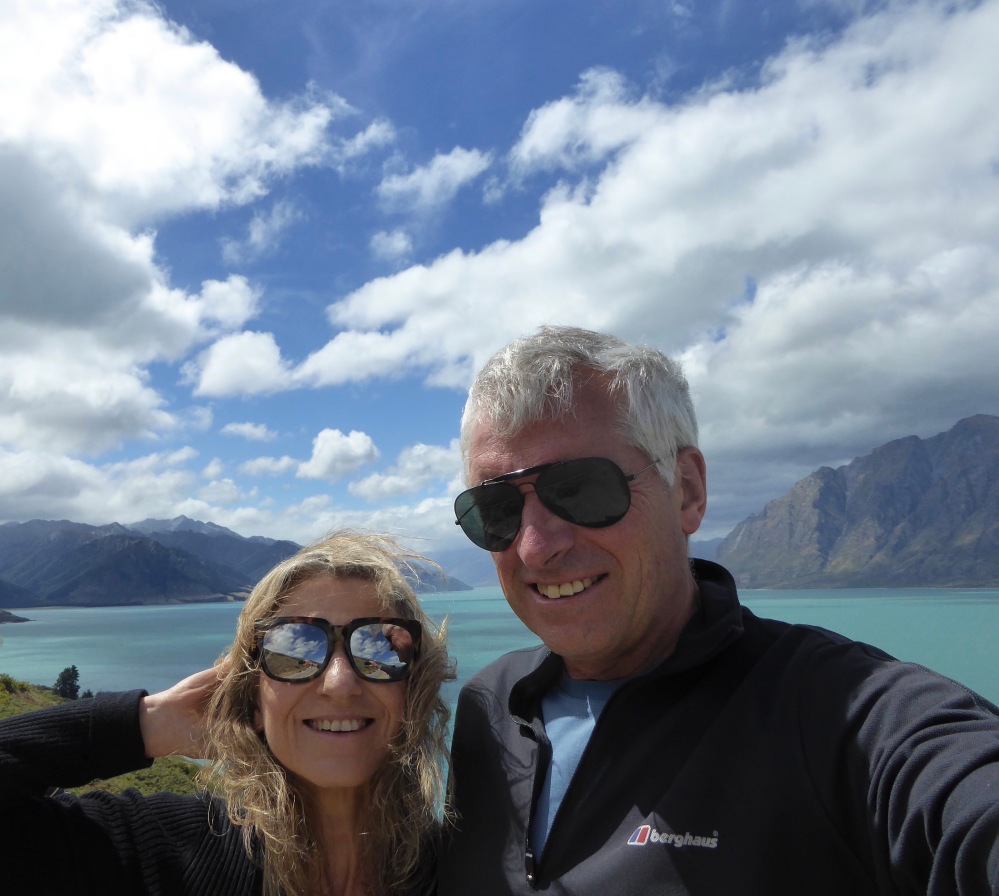 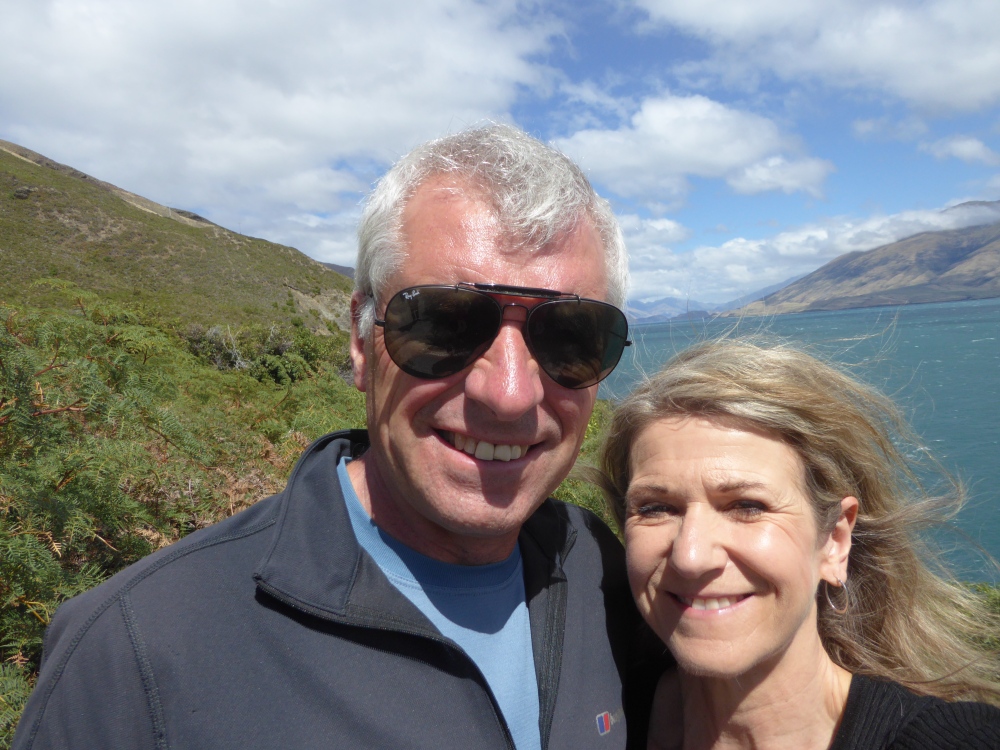 The first thing that struck us when we went out to explore Wanaka was how crowded it was.  A compact small town it is regarded as the gateway to the “adventure” area of South Island, and there are many extreme sports or activities on offer for the adrenaline junkies to get their fix.  Additionally, we noted that there appeared to be a massive presence of extremely fit looking athletes wearing part wet-suits or pushing smart road bikes around. They were all here for something called the Challenge Wanaka event, which would be taking place in a couple of days time.  We quickly established that this was not a re-run of that 90’s BBC TV show “Challenge Anneka”  but the Challenge Wanaka Ironman Triathlon.  There is also a half Ironman with an international field, including from the UK, Joe Skipper and Laura Siddall and the world best, Javier Gomez from Spain. There are corporate relays, team relays and what was effectively a day of races to keep all spectators entertained.  The setting could not be bettered; sitting at the south end of the lake with hills and mountains either side, Challenge Wanaka is regarded as the worlds most picturesque tri-athlon.

The main park area in the town, Pembroke Park, had been transformed into a massive event village, providing shelter for trade stands, transition areas, bike racks and servicing and kit storage areas for the athletes.  The lakefront promenade was cafe/bar/restaurant heaven for foodies and drinkers alike, each one packed with locals, and visitors from all over the world.  A real cosmopolitan mix for such a small place yet a chilled out and relaxed environment for all to share and enjoy. 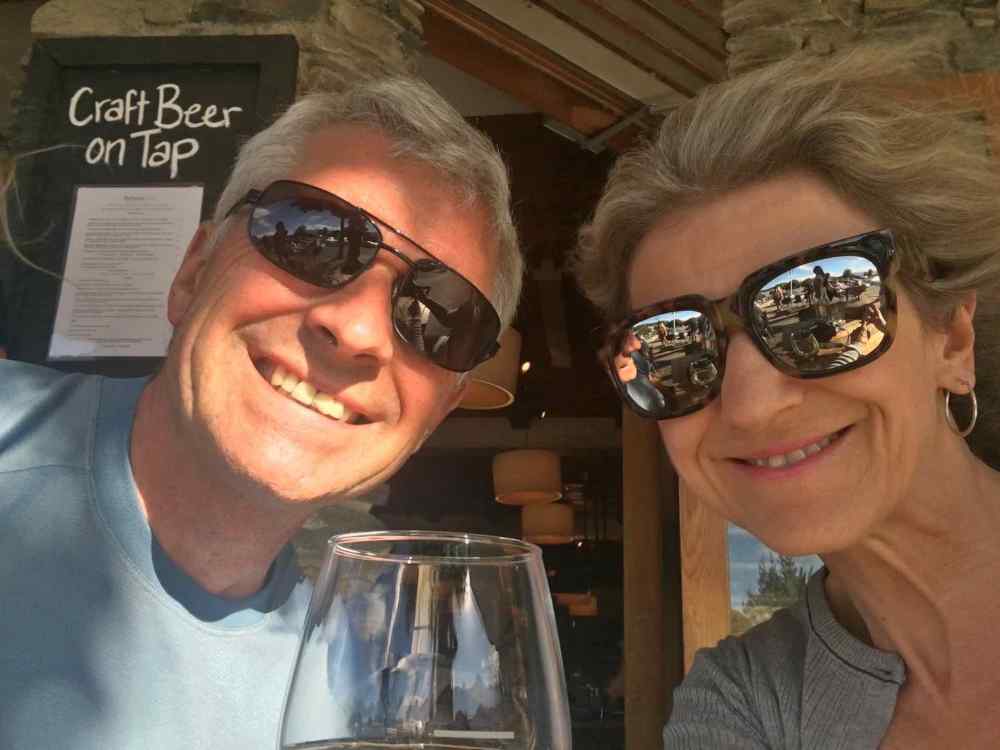 Us enjoying the cosmopolitan atmosphere

Our walk on the Friday took us first up the east side of the lake on a track that would be used for the run element of the triathlon.  As we walked out of town towards Eels Bay,we got superb views of the mountains to one side and some individually designed homes in a lakeside village close by.  These all had gardens and lawns down to the lakeshore with our track cutting through.  Our walk took us on to Beacon Point which gave us stunning views back towards Wanaka with more mountains behind! 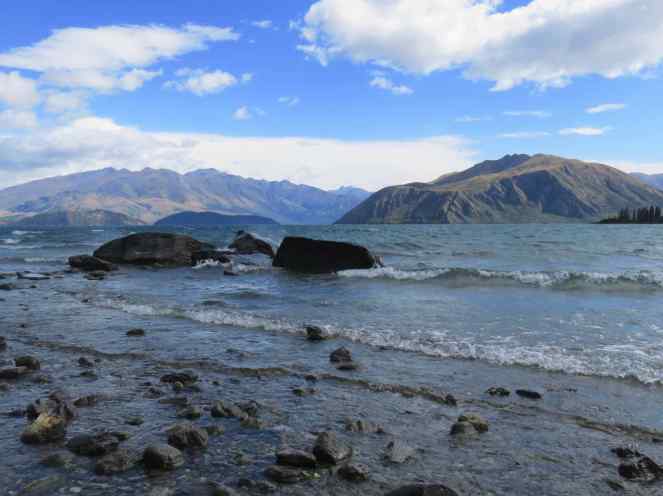 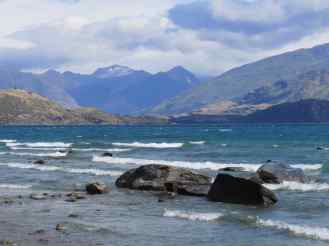 Two views from Eels Bay; Us at Beacon Point

After lunch we explored the west side of the lake, but not before watching  many school children taking part in their own age group mini-triathlons.  It was great to see, the enthusiasm that these kids showed in getting stuck into what is tough event for adults let alone them, and their determination to achieve, mainly for themselves but also for their schools, teams or whoever they were competing for. 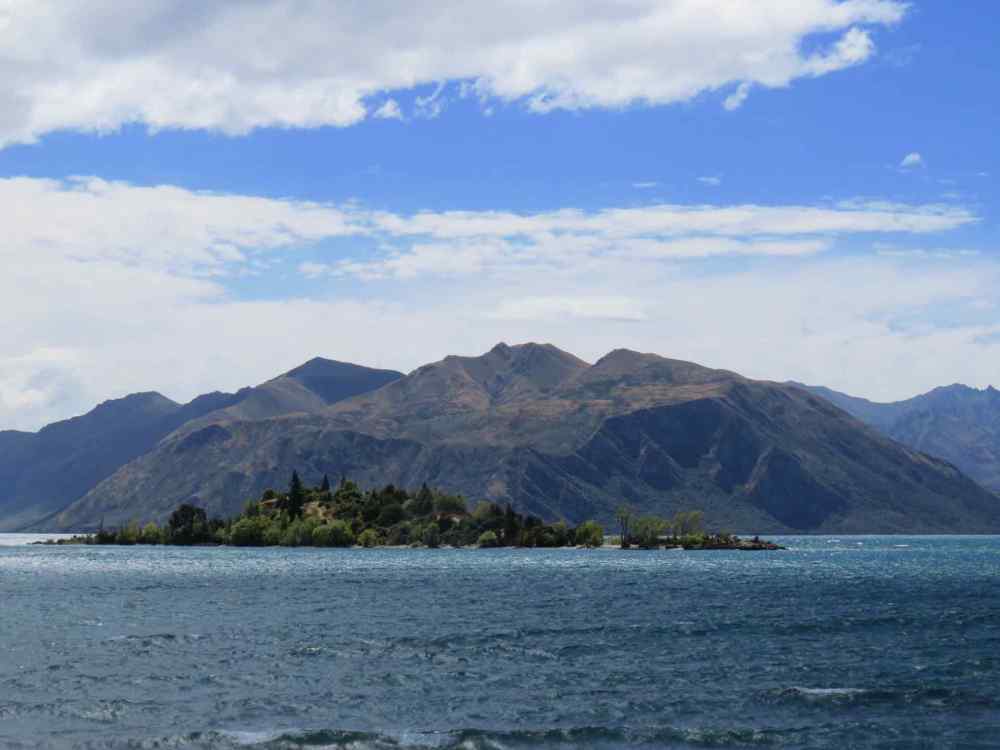 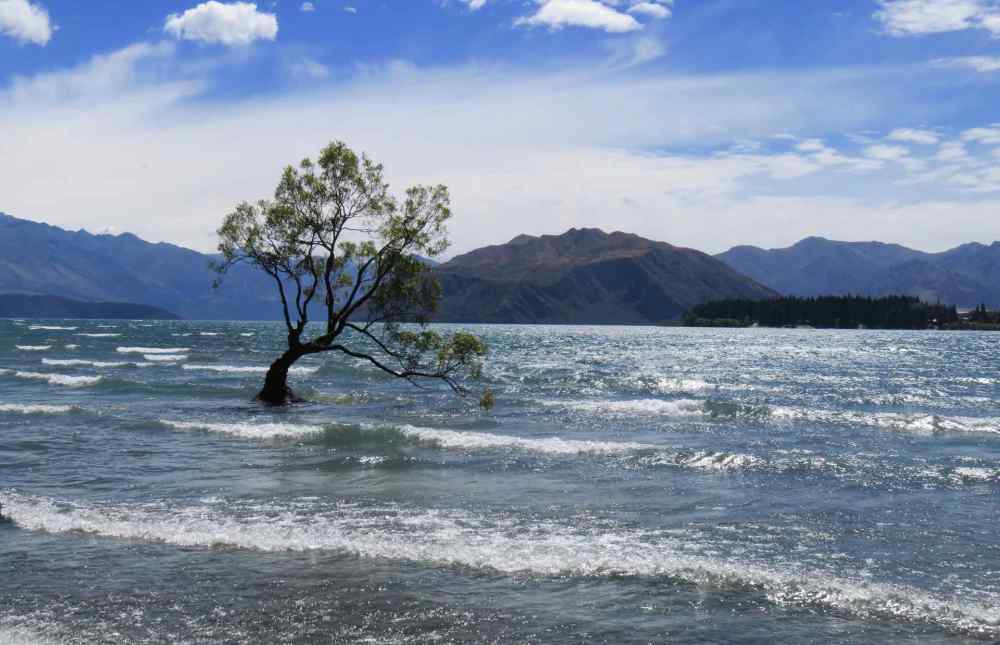 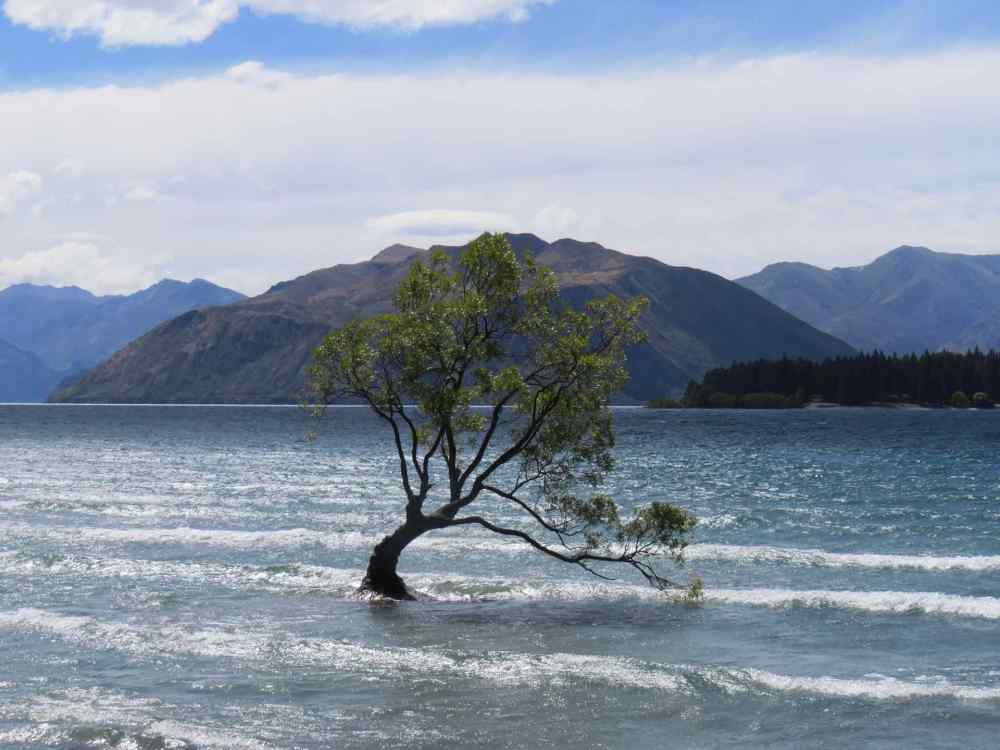 Top to Bottom:  Ruby Island; Two views of the Wanaka tree; Panorama of the West shore

A major landmark on the west side of the lake is the Wanaka Tree.  Any landscape photographers may be aware of an old tree that used to stand alone on Rannoch Moor in Scotland and was a target for many a photograph, especially in winter time.  Sadly it blew down a few years ago.  The Wanaka Tree is similar in that it is a lone tree but it sits about twenty metres out in the lake all on its own.  The story of how it got here is quite mundane. Back in the 1930’s a local farmer made a fence at the edge of his land to stop his sheep from wandering into the lake.  He used Willow stakes to support the fence.  Over time, the lake encroached on to his land as it expanded, and this post was the only one left standing.  It began to sprout branches and now 70 odd years on it has become the Wanaka Tree and is a “must stop” location for all photographers, even those with mobile phones and Selfie Sticks, of which there were many when we were there.

Further on up the path it goes past the Ripon Winery, owned by the Ripon family for many many years.  Their wine is regarded by experts (and I am NOT one) as being very exclusive.  You could go in for what they call a “Cellar Door” but not on the day we walked past.  Maybe they knew we were coming and closed for the day!  Just up from the winery is a nature reserve in the middle of the lake, Ruby Island.  The island is home to native mountain ghekos and giant ground wetas and is accessible by boat or a good swim.  It the past the presence of human activity in the form of barbeques has led to fire damage.  To prevent this the Lakes Council installed a number of water tanks for irrigation and fire fighting, and also a free to use gas BBQ which has helped to prevent further fire damage. 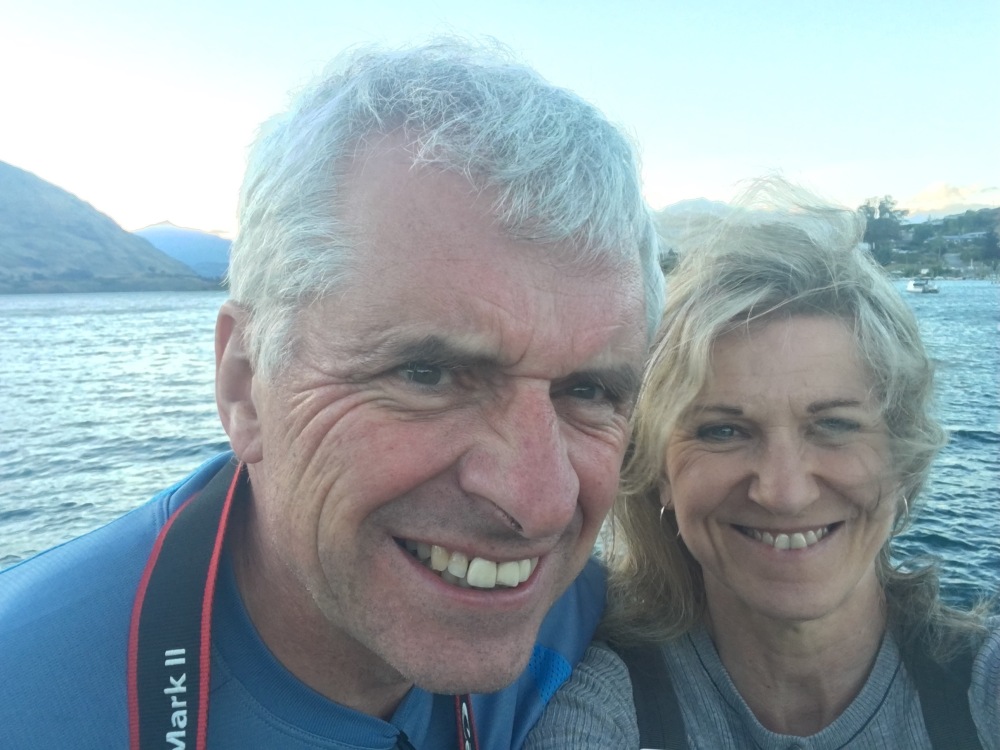 Us With Ruby Island in background

At this point we turned back and wandered into town for a coffee, this time at another lakefront coffee shop.  On the walls they were selling work by local artists but the exhibit which most caught my eye was a tower of Cassette cases with the  tapes still inside.  It appears that someone had got hold of a job lot, and made a square tower out of them having first ripped out any labels.  The sculptor had mounted the whole lot on a square plinth.  The price for this artwork? $NZ400, about £200.  Now why didn’t I think of that when I ditched my cassettes all those years ago. 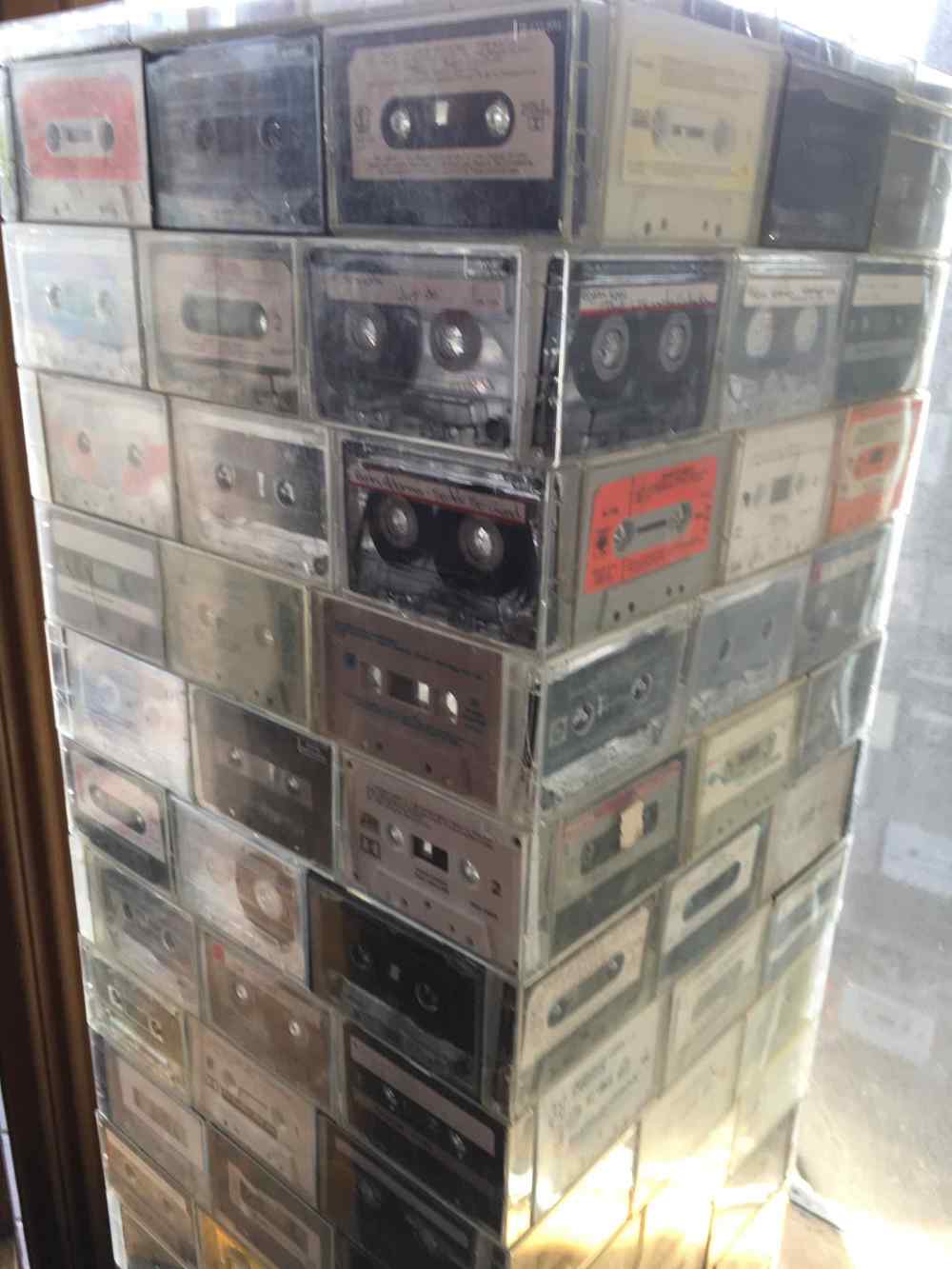 A use for your old Cassettes maybe?  This lot $NZ400

Choosing somewhere to eat each evening was a challenge.  All bars and restaurants on the lake front had outside seating areas which were packed.  We managed to squeeze into one corner of a bar/restaurant which did not look too promising but was the only place that had any room.  We made an excellent choice, our food was excellent and the service brilliant.  So good we went back the following night!

Our time in Wanaka was short (only two nights) which was sad because we had really enjoyed our time here.  On the Saturday morning we were up early to watch some of the Ironman Triathlon and were down on the shore to see the first athletes scramble out of the water and off to transition to get on their bikes.  We watched the Half Ironman pro’s set off on their swim before heading back for breakfast, coffee in a local Cafe then under way.

Top:  Weather has changed again…..Race day dawns:  Bottom: Some of the Ironman leaders  complete their swim.  Only another 8.5 hours to go! 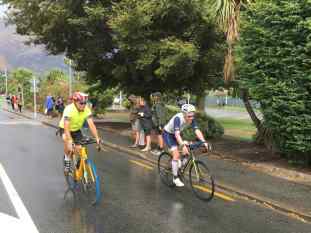 We were stopping at an Aviation Museum called Warbirds and Wheels, just outside Wanaka.  The advertising said it was combination of classic cars and classic aircraft in an exciting display.  Well they were right about cars and aircraft but oh dear what a disappointment.  There were about five aircraft spanning WW1 to the early 90’s and a number of American classic cars from the 1920s to the 1960’s.  There were a couple of storyboards featuring key people from the RNZAF including the Air Force’s first female fighter pilot.

A selection of Images from the Warbirds and Wheels Museum.

From Top Left: Hawker Hurricane; Link Trainer; A4 Skyhawk; 1961 Ford Mustang; The Car Hall; Rolls Royce 20-25.  Note: The Link Trainer is the first ever Flight Simulator designed in the late 1930’s to teach “baby” pilots the primary effects of controls of an aircraft.

Back on the road again and once clear of all the cyclists in the Triathlon we made good headway along a valley en-route to Queenstown. We began to climb and the road got very interesting, with hairpin after hairpin bend as we drove up and through the Crown Ranges.  At the top there was a brilliant viewing point looking down the valley towards Queenstown.  In the distance you could see the single runway of Queenstown Airport.  As we were eating our lunch a passenger jet flew along side the hillside opposite us looking dwarfed by the side of the hill, before turning left to line up on the runway.  This route was repeated a number of times by different aircraft inbound to Queenstown.

From here it was short but very interesting drive down the other side of the mountain, with more, even tighter hairpin bends before the road levelled out in the valley.  A few  minutes later “Doris Satnav” directed us into a short cul-de-sac on a small but spacious estate, to the “Bach” that would be our home for the week in Queenstown.