It was time to leave the Sunshine Coast behind and head for Brisbane Airport for our flight to Hobart. However as we had an early morning flight, it meant a stop at an airport hotel the night before.  With this in mind we decided on day out en-route to the airport. Our destination was the Maleny Botanic Gardens midway between Cooloola and Brisbane.

We elected to drive a “country route” to Maleny to avoid the major roads. The main reason for this was to stop at a lovely country coffee shop somewhere.  We ended up on the outskirts of Gympie.  Enough said!   From there we followed Googlemaps directions along the quieter roads which eventually took us down a country lane which rapidly began to climb into the mountains. This was a little concerning but then the voice said turn right.  The lane quickly turned into to a dirt track and continued to climb and get narrower to what could only be called a single track with no passing places.  Luckily nothing came the other way, otherwise one of us would have been in a gulley or down the mountainside.  After a worrying 15 minutes or so we found the tarmac again and shortly after, drove into Maleny Botanical Gardens.  I was never born to be a rally driver, especially not in a Toyota Corolla sedan!

The gardens were set on the side of a steep slope so were split in to large terraced areas each with its own theme.  As the pictures below show, the garden had some awesome views as well as some interesting landscaping and ornaments. We spent a relaxing couple of hours ambling round the various parts of the gardens, admiring the planting.  A worthwhile day out and a pleasant diversion before our drive to Brisbane Airport. 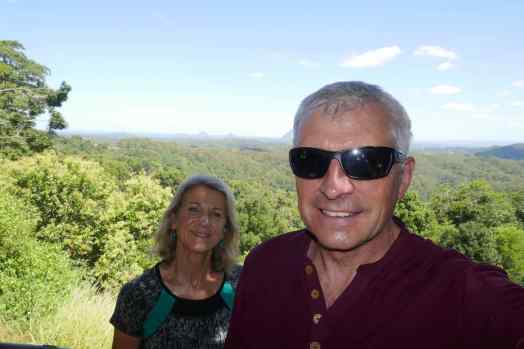 Us in the Gardens – Note Lyn’s pose top right!

An early start saw us boarding our jet for a 3.5 hour flight to Hobart.  Most flights are usually boring especially when there is no entertainment, and this one was no exception until Lyn accidentally spilt her freshly poured coffee into her lap and onto her laptop keyboard! The laptop survived but even several days later it still has that stale coffee smell.  Our thanks to the Virgin Australia cabin crew who were excellent in looking after Lyn and the laptop.

Stepping off the aircraft at Hobart the first thing we noticed was the temperature.  The sun was shining brightly, as it was when we left Brisbane, but it was much much cooler.  From 28C early morning to 19C at midday in Hobart!  Chilly, well we thought so anyway.

We were meeting Lyn’s cousin Jo at Hobart airport.  Jo had moved to Australia in 2015 with hubby and son and are happily settled just outside Melbourne.  We always see them when we come over on our travels and this was an opportunity for us to catch up with Jo on her own.

She had managed to get a flight from Melbourne which landed just behind ours, so we did not have to wait long until she bounded round the corner and after welcome hugs we headed into the city to our apartment base for the weekend.  After dumping bags we set out to find food (Cheapie airlines do not feed you!),  explore a little of Hobart, catch up on stuff, and decide on a plan for what to do in our shared weekend.  Two things stood out for us, the free City Walking tour and a visit to MONA, Hobart’s Museum of Old and New Art. 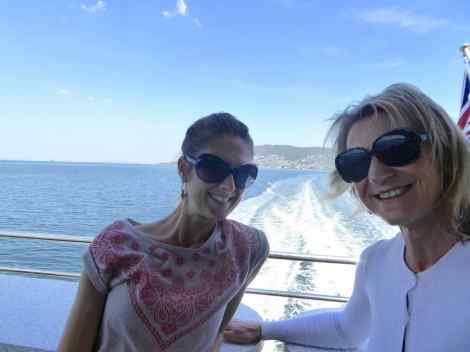 The morning after a very enjoyable evening before, Jo came round to our apartment bright and early and we all trotted off down the road for a coffee before meeting the walk guide in St Davids Park, a small green space nearby. 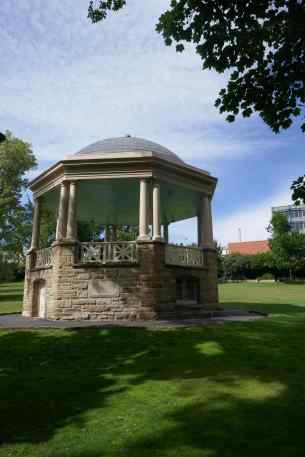 The park dates from 1804 and was originally the first burial ground in Tasmania, located away from what was then the main settlement.  As the town expanded,  many of its towns most prominent citizens were interred there, but by the 1850s it had become overgrown as space had been used up and the city grew around it.  It was finally closed and abandoned in 1872. It was not until 1919 when the city council took ownership of the park that it was cleared and renovated as a recreation ground. A register compiled at the time shows that at least 900 people were once buried under St David’s Park. Some were reburied at the city’s main cemetary but most were allowed to rest under the gardens and lawns. There is a memorial wall bounding the park which is made up of many of the original headstones from the park’s previous life as the Hobart colony’s first cemetery. It contains the names and details of many “First Fleeters”, and many of the early settlers of Hobart Town and is a fascinating, if a little morbid read, if you have time to spare.

The group moved on to an area of Hobart called Battery Point.  It is interesting to note at this point that Tasmania was originally named Van Diemen’s Land by its discoverer, Dutchman Abel Tasman in 1642.  Subsequently the French came visiting in the late 1700’s but did not stay long and it was not until 1803 that the English established a small military outpost on the eastern shore of the Derwent River to forestall any claims to the island arising from the activities of the French explorers. In 1818 guns were installed by the English on what is now Battery Point, as part of the coastal defences.  It was thought the French may come calling again but the guns were never fired in anger, being used only for ceremonial tasks.  The battery was decommissioned in 1878 because it was thought that the location would  probably draw an enemy’s fire onto the surrounding residential neighbourhood which had spread around the site.  Today Battery Point is one of Hobart’s most prestigious residential areas, with many large and extravagant homes, built originally by the traders and business people of the era.  The most exclusive area is around Arthur’s Circus a quiet circular close originally built to house the officers who staffed the garrison.  These houses are original and all have preservation orders on them which prevents them being demolished or altered in any way, inside or out.  To own one today would probably cost anything up to A$750,000, for a house with an outside toilet!  En route through Battery Point our guide, Ben, pointed out a number of interesting buildings including a pub called “The Preachers”, once owned by a vicar, which now has a coach in the back garden as shelter if it rains, and the original Queen Elizabeth Hospital, which is now a Maternity Hospital, and where Hollywood actor Errol Flynn was born.  Must admit I did not know he was an Aussie!

From here the walk headed to Salamanca Square which is just off the waterfront area of Hobart.  Originally the site of a large quarry, the area was bordered by warehouses but in the 1990’s  a large square was created behind these buildings.  It is now a popular area with locals and tourists, who enjoy the many bars, restaurants, and artisan shops within the complex.  It has two unique features as noted by our guide. One is the fountain in the middle of the square.  The other is a sculpture at one end built by the city council as a permanent steel Christmas Tree.  To be honest it looks nothing like a tree at all.  It has split opinion among the locals, some like it, most hate it and consider it a waste of money.  So much so that in order to mask its stark nature many have taken to creating crochet squares from multi coloured walls and stitching them together around the sculpture.  Personally I am not sure this has improved anything, but it is a talking point.

From here we proceeded past the Parliament Building and the statue of Tasman and his ships, to the waterfront where the walk ended.  Ben was an excellent guide and brought to life the birth of Hobart and Tasmania.

Clockwise from top left:  The three of us; Jo; Lyn’s new buff – bit warm for that here!;

Our afternoon trip was a visit to MONA, the Museum of Old and New Art. The Lonely Planet guide describes MONA as “…….art for grown-ups”  Brainchild of successful gambler, entrepreneur, and philanthropist David Walsh, it is the home for everything that is weird, subversive and downright odd in art, set against some old and classical pieces.  Set deep into the rock cliffs about 12km from Hobart, the best way to get there is by the MR-1 boats operated by the MONA company (funny that).  Once there the exhibition floors cover three subterranean chambers each lit to suit the exhibits.  It is physically dark and slightly disorientating, and that is before you have seen any exhibits. 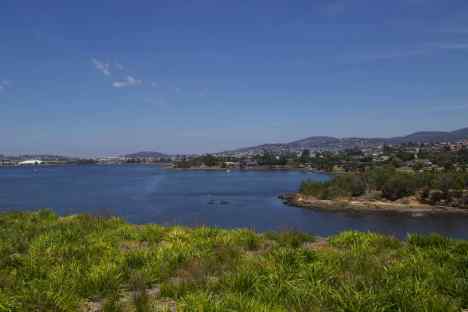 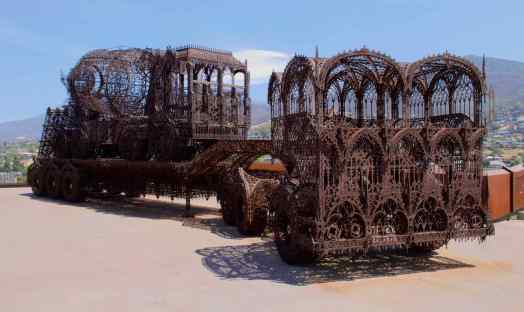 Clockwise From top Left; View from MONA back to Hobart; Lorry Sculpture x 2.

Rather than keep together we wandered around alone, each of us with our thoughts on what to view.  There is not enough space here to describe everything we saw, but some strange oddities stand out, such as “Cloaca” a contraption consisting of five connected large jars each filled with liquid replicating stomach acids.  The idea of the artist(?) was to replicate the human digestive system.  This machine is fed at 11am and 4pm, and somehow poo’s at 2pm daily. Oh, the room in which it is housed stinks of human poo, for realism I suppose!  If you think that is weird, check out the mechanical male and female skeletons simulating sex, with flashing screens on two sides above the models showing flashing images of brain activity whilst this is going on; and the “Fat Car”, a Porsche 9/11 with added polystyrene to make it look fat.  Like I said, odd –  very odd.

This is the simple stuff:

A bit off the wall:

Now it gets weird:

Clockwise from top left: Tim – This guy has literal sold the skin of his own back.  He sits there for 6 hours per day listening to music.  One day he will cash in on his sale(??); “Artifact” – A sculpture of a human head on the outside.  On the inside, strobe lighting and images reflecting messages in the brain.; “Cloaca” – The Poo Machine; Weird images; Fat Car – Porsche 9/11 – what a waste of a good car.

We met back at the cafe, feeling very queasy and disorientated by our experiences,  unsure what we had been witness to.  Was it art or was it people doing stuff in the name of art but seeking to provoke and shock at the same time?  Methinks the latter.

The trip back on the boat was quiet and subdued and it was quite some time before we recovered our equilibrium enough to enjoy an evening drink and a meal together.  We said our farewells at this point, Jo is spending time with her Tassie friend and we are having a less disturbed day in Hobart visiting the odd museum and a real art gallery before moving on to our next destination, Kettering on the southwest coast.