From an old established suburb of Melbourne to an almost brand new one.  We have moved to Point Cook, just over an hour away from Hampton, and the difference could not be more stark.

Hampton was an established and mature suburb with classic style houses and bungalows interspersed with the odd new build. In 2001, Point Cook had a population of around 1700 people, 500 of whom lived on the nearby RAAF Base Point Cook. At the last count in 2016, the population had grown to over 49,000, with one of Greater Melbourne’s most expansive developments being built here at Point Cook and the surrounding area.  Judging  by the ongoing building work everywhere my guess is that the area is even larger now!

Our accommodation is within the charmingly named Sanctuary Lakes Resort.  It is home to several gated communities, (not us) a golf course designed by Greg Norman, large Community Centre and coffee shop, and an inland beach and play area.  The estate has, as its centrepiece, a massive artificial lake which is home to ducks, back swans, gulls, waders and pelicans.  Many of the more affluent homes back on to the lake, and some even have small landing stages to launch small boats or kayaks from. About 5km away is the shopping centre, a huge undercover mall which is home to about 40 stores of various types, all considered necessary for a growing estate.

Shots of Sanctuary Lakes Resort, our base for ten days

Top: View of the marsh from our back garden; Bottom: This beastie was lurking outside our front door when we got back from a day out.

We arrived too early to take over our rental house, so lingered close by in a small park area.  Sitting in the park, Lyn suddenly felt a nip on her ankle, another insect bite.  We thought nothing of it until the following morning after Parkrun (more of which later) when her ankle came up like a balloon.  This meant a visit to the local Medical Practitioners, which happened to be opposite the shopping mall.  The doctor soon set her up with an antibiotic prescription and anti-histamine.  That appointment cost A$68 and the prescription charge another $28.

We are this side of Melbourne to catch up and spend time with Lyn’s cousin Jo, husband Craig and their young son, and to explore some new places easier to get to from Point Cook. They had certainly found us something different to share on one day.

The Tibetan Buddhist Society have a temple and headquarters about 35 minutes north of Melbourne and to celebrate the Tibetan New year they had organised a New Year Meditation Festival.  Lyn does meditation as part of her Yoga practice so was keen to see more.  We arranged to meet them at the temple.

After looking at the programme Lyn had decided who and what she wanted to see, and I, although not wildly enthusiastic, was idly curious as to what this was all about.  Our first event was a seminar entitled “What is Buddhist Meditation” presented by the Abbot of the Jikishoan Zen Buddhist temple in Melbourne.  Although his accent was difficult to understand he managed to communicate his points quite well and what he said had some merit in a world defined by conflict, stress and agitation.

Clockwise from top left: Tibetan Buddhist Temple; Part of the Temple Garden; Salvias from the garden

After a quick lunch we were back in the temple for a Meditation workshop led by two Buddhist philosophy teachers.  This was a more interesting session as I could relate to some of the points made through relaxation exercises in my yoga class.  After this, a twenty minute breathing meditation session followed by another lecture entitled “21st Century Life is so Full of Stuff Except Peace and Joy“.  Lyn got much out of the workshop sessions and came away more enlightened and motivated with a determination to explore Buddhism more deeply when we get home.  For me the short meditation and the Garden tour at the end of the programme were the highlights, learning how they keep aphids off their rose plants by companion planting, adhering to the Buddhist philosophy of killing nothing whilst growing their own vegetables and fruit, and admiring how they garden in such hot and difficult conditions.

For a complete contrast we headed to the Immigration Museum in Melbourne.  In several previous visits to this city we had never been there.  What drew Lyn especially was an exhibition about Kahil Gibran the author of “The Prophet” one of the books which started her off on her spiritual journey.  The exhibition, entitled ‘Kahlil Gibran: The Garden of the Prophet’, celebrated his life and work. Kahlil Gibran’s literary writings have inspired some of the most influential figures of our time; Indira Gandhi, Elvis Presley, John Lennon and David Bowie to name just a few. As well as a literary creative, Kahlil Gibran was an accomplished artist, especially in drawing and watercolour painting and many of these works were on show. One display in a glass cabinet showed the original typeset sheets from the book, of the words we shared in front of our friends and family on our wedding day. A special, poignant moment for us as we re-read them together in the hushed environment of the inner halls of the museum.

The main exhibition areas of the museum showcased the story of Immigration into Australia through the eyes of the locals, the policy makers and the immigrants themselves.  It was a fascinating insight of how Australia has used immigration positively to build a nation but the exhibits also illustrated some of the bad things from the past, the institutional racism and the poor treatment of the Indigenous People by the white settlers right up to the 1980’s.  It is clear that today, Australia has a truly multi-cultural society – with one agenda, the promotion of Australia as a nation.  As with a number of other places in Melbourne, it would be worth returning in the future to see the bits, missed out the first time.

Following an enlightening couple of hours in the Immigration Museum, and a walk around the Botanical Gardens we met up with Craig for a beer and an evening meal.  A good day and evening.

I have mentioned the Macedon Ranges in blogs from previous years and we have thoroughly enjoyed days out in these hills.  Lying to the north of Melbourne, between there and Bendigo much of the area is covered in native forest land but it also has a thriving artisan food and wine industry.  We have come to Woodend, primarily because we drove through last year and we thought then that it looked like an area worth exploring more.  And so it proved.  It was a spacious small town with a wide main street filled with cafes and original shops, only one or two multiple chain stores, and that lends it a little individuality.  We spent a couple of hours exploring and looking round before heading off to our next destination.  I had seen the “Forest Glade Garden” on an internet search and as it was only a very short drive away from Woodend we went to take look.  I must admit to not expecting very much, but I could not have been more wrong.  The gardens were magnificent!

There was no on-site parking so we left the car on the road side under the trees, found the gated entrance and walked in. We were greeted by a sign that said entry was A$20 and please leave the fee in the honesty box on the post! “This is different”, we said to each other.  From the narrow entrance path the garden gradually expanded out to over 5 hectares of beautifully crafted gardens with a large English section with its huge exotic trees and masses of colour, a Japanese section complete with bonsai house, and a cool woodland area displaying masses of shade-loving plants. Mixed in with variety were traditional lawns, a number of large water features and over 20 sculptures of figures, from a little boy with a camera to a statue of Albert Einstein sitting on a bench looking out over what could have been his own garden!

Sculptures clockwise from top left:  Ballet Dancers; Hipocrates; Me and the Boy With The Camera; Boy and Dog;

We spent over 2-5 hours walking round, taking in all the twists and turns and different aspects and just sitting on a bench listening, looking and revelling in the peace and quiet.  What was even better was that there were only three other couples sharing the delights of this garden with us, plus the two very discreet maintenance men who stayed out of everyones way. Looking around though, it was hard to believe that the whole area was devastated in a large bush fire in 1983, but thanks to the efforts and hard labour of the owners and the trust that now runs it, the gardens were re-born and have become what they are today.  We both love gardens, home and abroad, and rated it as one of the best gardens we had ever visited.  Stunning.  I hope the photographs do it justice. 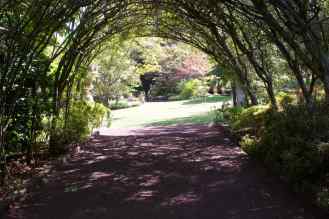 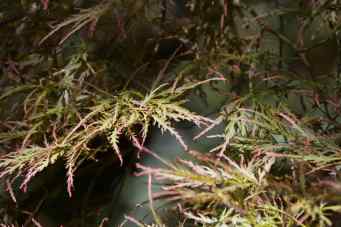 Some scenes of the Forest Glade Garden

We have several more days in Melbourne before our long journey home; more in the next Blog.