For this years point to point walk we had planned a leg of the South West Coastal Path along Dorset’s Jurasic Coast. However when we came to organise our accommodation we ran into some serious problems, so at late notice (April this year) we switched our interest to the Cleveland Way at the opposite end of the country.  But that is not the end of the story.  Read on to find out more.

The Cleveland Way is a one of a number of National Trails in the UK, this one in ancient Cleveland in north east England. It runs 110 miles (177 km) between Helmsley, skirting the North York Moors National Park and following the coast path from Saltburn, ending at the Brigg in Filey, on the Yorkshire coast.  Much of the first half follows ancient historic drovers tracks that used to link villages and towns before the advent of proper roads.

Mono treatment of York Station on the journey up. By the way, this was shot on my I-phone!

Getting to the starting point has its own difficulties, namely no railhead nearby (the nearest was at Malton, some 20 miles distant.  Nevertheless these difficulties can be overcome so with much excitement we embarked on our latest journey.  Rail hold ups meant we arrived at our start point of Helmsley some 90 minutes later than planned but that is not uncommon in the UK! It was a lovely place for a night stop before the start of our walk.

Views of Helmsley.  Clockwise from top left: The Feathers – our night stop; Behind the Market Square; Monument to William Duncombe, 2nd Baron Feversham (1798-1867); Main Street Helmsley; Hunters the deli, one of many independent shops in the town.

Helmsley is a quaint, small market town in the heart of the North Yorkshire Moors with a large square in the centre and two monuments.  After sampling coffee in a local cafe we set off, in no rush to complete the 12 miles to our first night stop of Kilburn. The Cleveland Way celebrates its 50th anniversary this year but we did not see any celebratory bunting or flags to commemorate this as we left Helmsley, just a chalk written notice on a board close to the castle at the start of the trail.

Clockwise from top left: The only sign commemorating 50th anniversary of Cleveland Way;  Helmsley Castle from the trail; Panorama from early on the trail; Market Cross, the official start point of the Cleveland Way; Lyn in the square at Helmsley, ready to walk; Cleveland Way this way.

En route, we passed the ruins of Rievaulx Abbey, a Cistercian establishment founded in 1132 by twelve monks from Clairvaux Abbey in France. It was one of the great abbeys in England until it was seized under Henry VIII of England in 1538 during the dissolution of the monasteries.  Its remote location was well suited to the order’s ideal of a strict life of prayer and self-sufficiency with little contact with the outside world. We could see why.  It was a lovely place, however we elected not to tour round, but continued on our way, wondering if we were following in the footsteps of those early monks of Rievaulx.

Clockwise from top left:  Lyn on stepping stones; Lone tree hill; Wild foxglove at Sutton Bank; Wild Orchid – there were many of these on the trail.

Our first night stop was in Kilburn, a small village close to Thirsk.  Accommodation was good but we discovered that the village pub, where we had planned to have dinner, was closed due to a fire and that meant a taxi ride to the next village of Coxwold for our evening meal. A short but expensive ride, but dinner at the strangely named Fauconberg Arms was worth it.

Day two started with us retracing our steps back up the hill past the Kilburn White Horse to Sutton Bank, then back on the trial to our next destination of Osmotherley.  It was a glorious sunny, warm day and we enjoyed a long trek over the moors to our coffee stop at High Paradise Farm.  The heather on the moorland was just starting to flower with its lovely purple shades, another month and the moor would be covered in this colour.

Clockwise from top left:  Kilburn; Leaving Kilburn. (The chap struggling with a bag in the background is our courier!) Kilburn White Horse; start of the climb up to Sutton Bank – a steep climb close to 1.5 miles long.

Two panorama’s looking from Sutton Bank over the Vale of York.

On the Cleveland Way trail

Clockwise from top left:  Lyn on the trail; Coffee shop – High Paradise farm.  The scones are delicious, and huge!; Looking back along Cleveland Way; Panorama Yale of York.

We arrived in Osmotherley to see the village roads closed and a summer fayre in full flow. Old fashioned stalls such as Coconut Shyes, Tombola’s, and the traditional sport of many Brit’s, drinking until you fall over, in full flow.  Almost as soon as we found our accommodation I began to feel ill. (Not because I had seen where we were staying!)  I was shivering and cold in the hot weather, and as time went on I began to feel nauseous too.  This was where it all went pear shaped!  Food Poisoning, we thought from a Tuna sandwich bought from Sutton Bank Visitors Centre for my lunch.  In between bouts of sleep and nausea, the village celebrations continued outside.  I heard bits of  an Elton John Tribute Band during the evening party, playing some old stuff.  It was awful and did not help any recovery that may have started. I am told that later on, a celebratory firework display was held which apparently sounded like an invasion….I slept through that.

At Breakfast the following morning I was no better, managing only half a slice of toast.  We bagged a lift with our bag courier to our next destination, Great Broughton, where I spent most of that day sleeping and trying to recover.

Once again I was unfit to walk any distance so our courier drove us on to our next destination, Great Ayton.  Although I was feeling a bit better there is no way I would could have walked the 14 miles to here.  That was two days walking missed.  Meanwhile, Lyn, I think a little bored of the inactivity, decided to take a short afternoon walk from Gteat Ayton to a local landmark, namely Roseberry Topping, a single hill on the mainly flat landscape to the north east of the village.  She was gone about 2.5 hours whilst I rested.

After Lyn returned from her self guided excursion I decided that I needed some fresh air so, feeling a little better I took the opportunity for a walk around the village.  Great Ayton is where the explorer and navigator Captain James Cook grew up. (Yes THAT James Cook!).

Images from the Green, Great Ayton. 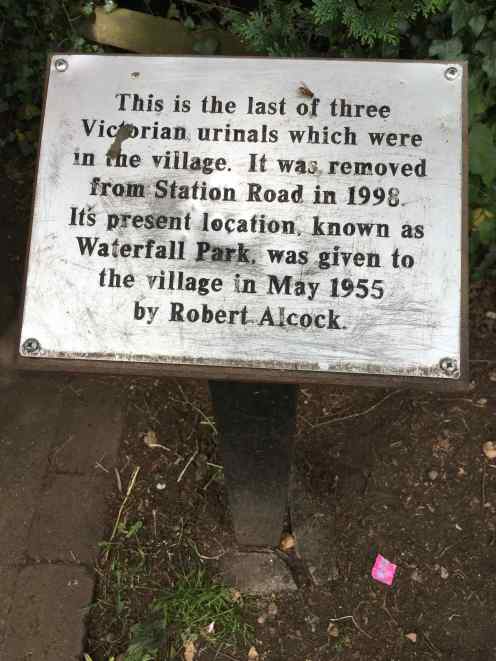 One of the strangest “points of interest” I have ever seen, anywhere!  A Victorian Urinal, now exhibited (not connected) in Waterfall Park Great Ayton!

The next leg from Great Ayton to Saltburn was a shorter distance, only 11 or 12 miles and  after a short walk exploring Great Ayton, I felt fit enough to do this leg.  However now it was Lyn’s turn. Shortly after dinner that night she started complaining of a rumbling tummy and as the evening went on she began to feel worse with nausea and generally feeling ill.  After little sleep the roles were reversed. I was feeling much better and Lyn feeling decidedly yuk! We started out on the next leg but it became clear very quickly that Lyn was unfit to walk so we returned to Great Ayton to await the courier for a third day!

Once in Saltburn, Lyn went to sleep whilst I went out to explore this small coastal resort which had a pier as its main attraction.  The bleak drizzly weather was very atmospheric, but did little to enhance Saltburn by the Sea as a place to visit, which was a shame as I am sure it is a very pleasant place when the sun shines. 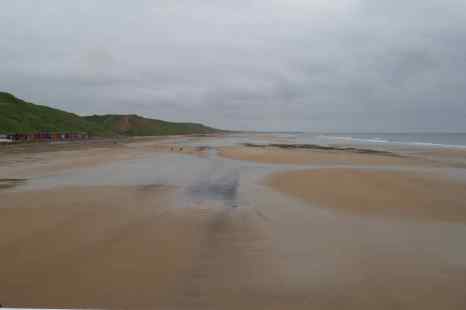 When I returned to our hotel, Lyn was little better and it would be another day before she felt fit to walk which meant another trip with our courier.  This left only three days walking to the end at Filey.  With very heavy hearts and huge disappointment, the decision was made to cancel the rest of the walk and return home.  The right decision in the circumstances, but our troubles were not over yet!

Top and centre – Views of the pier.  Bottom:  Knitted figures depicting typical seaside themes – in this case, Punch and Judy.

We checked the rail times and booked tickets for our return home the following day.  Leaving Saltburn on time we had to change at Darlington and Peterborough.  Easy, we thought.  However, just north of York our train stopped.  The driver announced that we could not proceed, because a train had brought down overhead cables just north of Peterborough and trains ahead of us were blocking the line. After about 90 minutes wait, it was announced that the train we were on would get to York and terminate there.  Passengers would transfer to a diesel train heading eventually to Kings Cross following a similar route to ours.  We pulled in to York and there was a cavalry charge across the platform to get to the waiting diesel, which was already full before our transfer.  With Lyn still not feeling well we decided to wait for another train.  Rail staff did not know when the next one would be but suggested we could travel to Manchester, pick up a train there and try and make our way home from there!  We cut our losses and elected to stay overnight in York and make our way home in relative calm the following morning.

Next morning we met our scheduled train as planned and set off on time aiming to be home by lunch time.  The rail companies had other ideas though and shortly after leaving York we found out about more delays, this time due to a broken down train!  We eventually arrived home some three hours later than planned.

Events on this walk had certainly conspired against us, and as Lyn says often, “it was just not meant to be”. Will we attempt it again?  I doubt it, there are too many other trails to do.