Nestled about 5 miles off the Southampton coastline is the Isle of Wight, the second most populous island in the UK. It has been a popular holiday destination for many years; Queen Victoria built her own bijou holiday residence there she called Osborne House.

We had been invited by friends to visit them in Shanklin so rather than try and fight the Friday traffic to get to Southampton, we decided to take our time and spend a day and night in Winchester before heading to the ferry.  On our way to Winchester we took advantage of our National Trust (NT) membership to visit a couple of places en-route.

First stop was Wimpole House, a large country estate and residence with a large landscaped garden.  We did not have time to visit the house but enjoyed a sunny morning in the extensive gardens.

Views of the gardens and us at Wimpole Hall

Some of the blooms at Wimpole Hall.

After a late morning coffee we were on the road again to our second stop, another NT property, West Green House Garden near a village called Hartley Witney.  The house is private but the gardens are managed and maintained by the lessee.  Described on its website as “a garden with a special and distinctive sense of place………” and who are we to argue. There were many areas of interest and enjoyment and was a very worthwhile stop on our journey to Winchester.  It was also very popular which meant few opportunities for photographs without them being spoilt by unintentional “photo-bombers”.

From here it was a short drive to our night stop in Itchen Abbas, a small village about 15 minutes from Winchester.

Winchester has fascinating history.  Noted as one of the early centres of christianity in England it was also the centre of the court of King Alfred the Great, the only English King to be accorded the “Great” title.  He was regarded as a wise and benevolent King with strong Christian beliefs who did much to encourage his subjects into education and 9th century equality.  He obliterated the Roman street layout in favour of a new grid order to better defend the city against Viking marauders.  The statue to him dominates the lower end of the High Street. 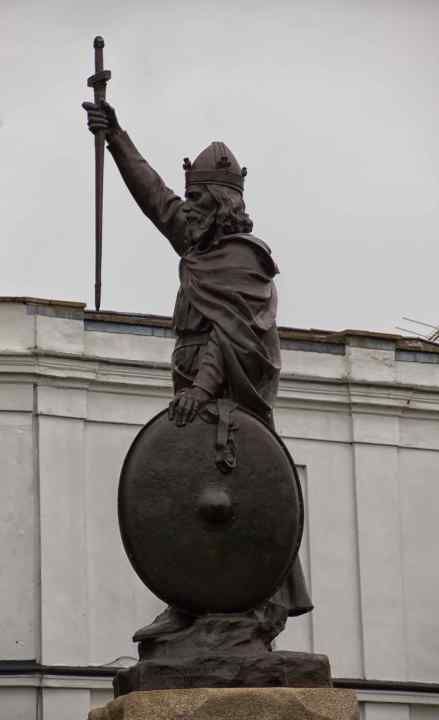 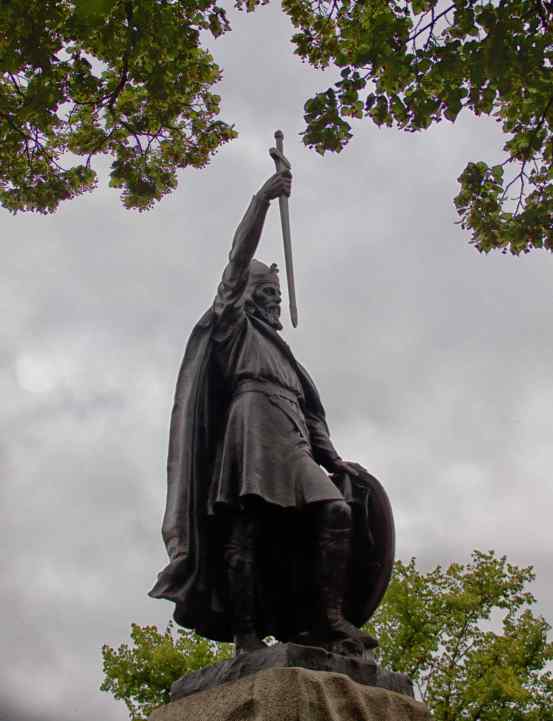 The statue of King Alfred the Great in Winchester

Centrepiece of Winchester and probably its most famous landmark is the Cathedral. Originally built in 1079 it is the longest Gothic cathedral in Europe. It contains much fine architecture spanning the 11th to the 16th century and is the place of internment of numerous Bishops of Winchester.  Sadly they charge a substantial fee to go inside, so we elected to admire it from the outside.

As with any city visit we join a guided walking tour, which took us around the cathedral as well as focussing on some of the historic architecture and buildings.  We were also shown the opulent former army barracks of the Hampshire Regiment, (Peninsula Barracks) now private apartments after the soldiers were moved out of Winchester city centre for reasons known only to the MoD! There is also a lovely riverside walk to the outskirts of the city, and an old city mill, which was recorded in the Domesday Book as milling corn in 1086.  Recent restoration work following floods in 2014 has the mill fully operational once again and provides a valuable historic link to the past and how flour was produced from grain.

Stones on each corner of the Hampshire Regiment War Memorial shows Battle Honours awarded to the Regiment.

Walk in the Water Meadows

So to the Isle of Wight.  We crossed The Solent on the Red Funnel ferry on a sunny morning and arrived at our friends Kath and Norm’s apartment in Shanklin shortly after.  We later learned that it was the start of Cowes Week, the annual festival of all things sailing, from small dinghies to ocean going racing yachts which would explain the plethora of small boats as we approached East Cowes. It is also a chance for those who have no interest in sailing, but who “love to be seen” on the social scene, to strut their stuff around the bars clubs and restaurants of Cowes.

The island (as it is known by locals) has developed its own Coast Path and part of it runs along the cliff and shoreline between Shanklin and the next village north, Sandown.  The path has wonderful views of the rugged island coast line from clifftop paths to esplanade walks.  The contrast between Shanklin and Sandown is stark.  Shanklin is a quaint small town with lovely classic architecture little changed by modern development.  Sandown on the other hand has attracted the “less scrupulous” type of developer and there are some ugly structures being built among the classical hotels on the sea front.  It is sad to see that some of these classic beautiful buildings are being demolished to be replaced by steel and glass structures with no soul.

Top:  Coast Path towards Sandown.  Bottom:  Us on the walk to Sandown.

Sandown also has a pier.  I have never seen a pier quite like it.  To access it you have to walk through a large noisy slot machine arcade before exiting half way down the pier.  Walking to the end we passed more seaside “attractions” and at the end a small dodgem car rink!  We did walk to the end and kept our money firmly in our pockets.  There was some light relief as can be seen from some of the photographs below!

Fun and frolics on Sandown Pier

Before we arrived on the Isle of Wight we had been reading of a storm approaching from the southwest, meaning the weather would turn rubbish early on in the weekend.  Our friends told us that the Shanklin Regatta had already been cancelled because of the high winds and stronger winds and rain were expected that weekend. Sure enough, as we awoke the next morning the winds were ferocious but the sun was still shining.  We were heading for a museum at Freshwater Bay on the southwest side of the island.

Dimbola Museum and Galleries is dedicated mainly to Julia Margaret Cameron.  She was one of the most important figures in early Portrait photography in the 19th Century.  Dimbola was her home and working studio, part of it can still be seen, together with a collection of old cameras at the end of the cafe. 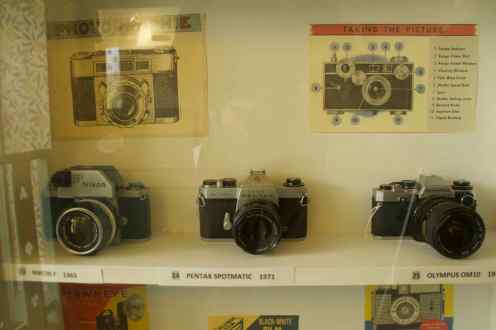 Part of the Exhibition of old cameras.

Originally an artist and writer she had a fascinating history, and only took up photography at the age of 48.  She created images of many Victorian celebrities, some of which were displayed in the museum, and she became known for her experimentation with close up and diffused focus techniques which has influenced later developments in photographic art.

Running along side this exhibition is one dedicated to the rock icon David Bowie.  Lyn was in seventh heaven, being a massive Bowie fan and she spent far too long (in my opinion) gazing at his many images hanging on the wall.  There is also one small section dedicated to the Isle of Wight Rock Festival, the most noted being the one in 1970. It was a fascinating museum and seeing all the old plate cameras that Ms Cameron had to work with and the evolution of cameras and photography makes me realise how spoilt we are now, having photography at our finger tips with smart phone technology.

Freshwater Bay is a wide sandy bay flanked at either end by tall chalky cliffs.  The wind was blowing strongly making the sea very rough, the tops of the breaking waves being blown away in a spray of fine mist.

From here as the weather deteriorated we headed inland to a craft village called Arreton Barns.  This was a large collection of small units selling a variety of artisan foods, arty ornaments, paintings and carvings.  In fact almost anything hand made could be bought here.  It was crowded with tourists, all hoping to escape the worsening weather.  We even witnessed a bride and groom having their wedding photographs taken by a small lake.  I presume their reception was being held in a nearby large barn. Finding little of interest here and with the wind strengthening and the rain pouring down we headed home.

The following morning the wind had dropped and the forecast looked more promising.  We headed out to the Jaguar Classic Car show at nearby Sandown Airfield.  As well as classic Jags there were many other old cars from 1970’s Mini’s to old Citroen vans and one which evoked memories for me, a 1966 Morris Oxford, a car my late Father used to drive.  As the heavy rain returned we took refuge in a new Aviation Museum which had recently been established on the airfield site. It focussed on aviation on the IoW and was an interesting if a little haphazard collection of memorabilia. It was a promising start for them but needs work. 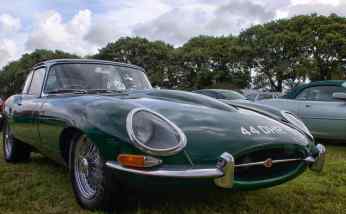 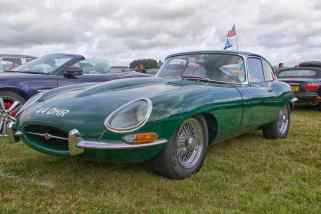 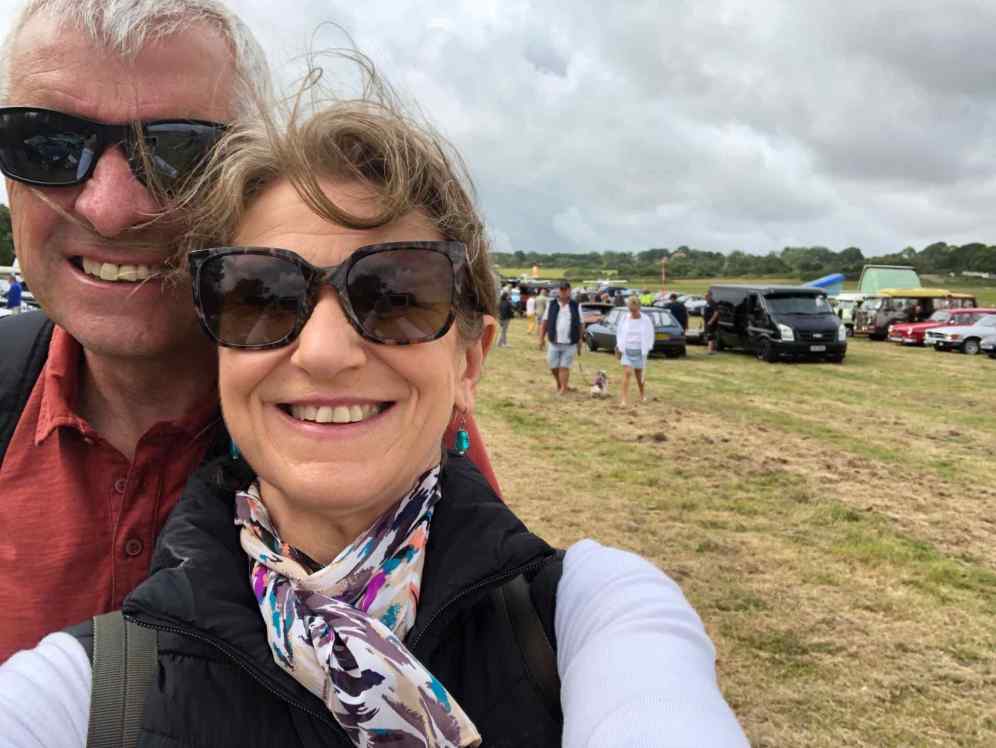 Other cars on show and us admiring the display.

Mottistone Manor House and Gardens are located near Newport IoW to the west of the island.  It is another NT property but there was no access to the Manor House.  The gardens, although not large have a wonderful variety of planting and styles. Recently it was the venue for the marriage between actor Benedict Cumberbatch and Sophie Hunter.

From the viewpoint the Manor House nestles in a sheltered hollow and gives views over the surrounding countryside to the sea a short distance away.  We spent a very enjoyable couple of hours wondering round, admiring the planting and the views and gathering ideas for our own garden.

Top and centre: Views of Mottistone House; Bottom: Kath, Norm and me in the garden

Some of the flowers in bloom at Mottistone Gardens

Our short break was nearly over and as we headed to East Cowes for the ferry back to Southampton we reflected on a wonderful weekend, despite the nasty storms that lashed the island.  As we drove off the ferry though, the weather had one final fling, lashing rain deluged the city as we made our way through Southampton on our way home.