For some reason I can’t explain I have always wanted to visit Sydney.  Whether it is the iconic structures like the Harbour Bridge or the Opera House that appeal, or the attraction of watching an Ashes cricket match at the Sydney Cricket Ground I’m not sure, but my ambition is about to be fulfilled.  There is just the small matter of a 970km drive to overcome. We had planned the drive over 3 days stopping in Port Macquarie and Nelson Bay on our way.

Having taken our fill of Byron Bay and the surrounding areas we headed south to our first night stop of Port Macquarie.  It was a long drive down the Pacific Highway and there is huge road improvement programme going on, but no hold ups, no delays, no traffic jams nothing eventful, save for the Satnav going AWOL every so often as the virtual road disappeared into a field.

Port Macquarie is a very pleasant, quiet fishing village with the now obligatory wide streets, a lovely harbour and numerous cafes from which to chose to sit and eat breakfast or drink coffee.  It’s one claim to fame is New South Wales’s only Koala Bear Hospital and somewhere we were  both very keen to visit.

Some views of Port Macquarie

The removal of the Koala’s natural habitat is the  biggest threat to its survival, as the Eucalypt trees, which is their main source of food and shelter are cut down to make way for housing, industrial development or roads. Koala’s admitted to the hospital suffer from a variety of problems ranging from diseases, injuries from motor accidents or dog attacks,  and injuries resulting from bush fires.  Most are rehabilitated and returned to the wild but the hospital has a few permanent residents whose injuries were so bad, they could not survive in the wild.  Whilst there we met one of the volunteers, an Irish guy who has been in Australia for over 40 years but still retained a strong Irish accent. he told us about the permanent residents, but even more extra-ordinary was how he came to Australia, via an Irish Orphanage until 17 and in his early 20’s, an 18 moth overland trek in a VW combi motor home with his Sister and brother in-law in the 1970’s, when it was safe to drive through Iran, Pakistan and Afghanistan! He has been in Australia ever since.  Retired now, he volunteers at the Koala Hospital 3 days per week. 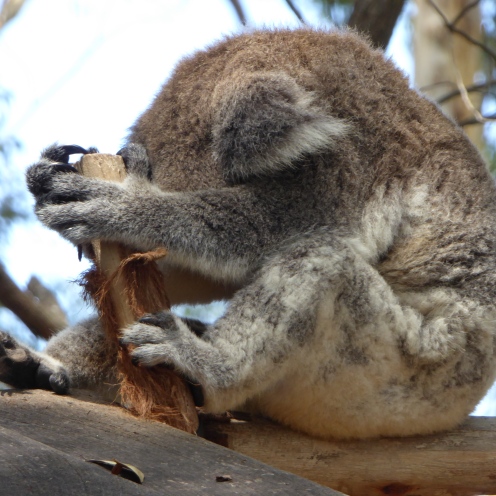 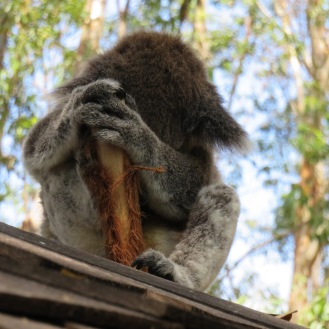 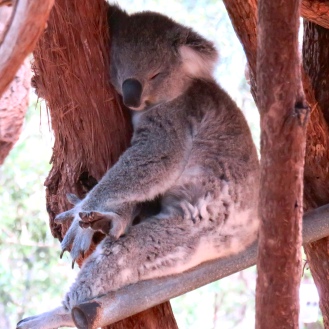 Clockwise from top left:  Lyn with a “Koala”; views of the resident Koala’s.

Lyn’s thoughts: “I loved this place, even before we arrived. As part of research for this trip, I had found the koala hospital on the internet and made sure it would be on our itinerary to visit. Being realistic, I didn’t think there would be much chance of seeing koala’s in the wild and I certainly didn’t want to see them in a zoo or wildlife sactuaries where for a fee you could ‘cuddle a koala’. So this seemed a good place to see them and to give a donation towards the fabulous work the volunteers do to help these animals. I did wonder about the possibility of having a close up encounter with a koala; I have to admit I yearned to hold one and yes, to have a cuddle, BUT I soon changed my mind. I knew deep down that close physical encounters with wild animals is not something to encourage.  This was confirmed when the volunteer told us that to get these wonderful creatures well again and released back to their natural environment, contact with human beings needs to be kept to a minimum. I honour and respect this and so my time with the koalas was kept to viewing them from outside their enclosures. Nevertheless, this visit to the hospital is up there as one of my highlights.” 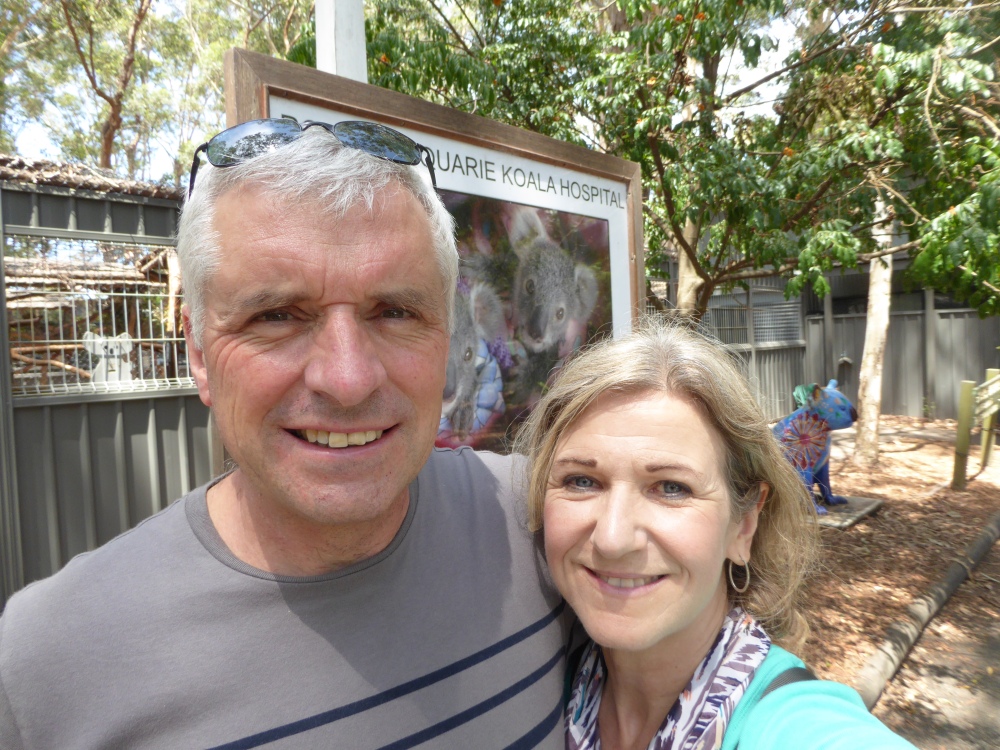 Us at the Koala Sanctuary

From Port Macquarie it was short drive to Nelson Bay, part of the Port Stevens resort for our second night stop.  A pleasant resort with a large fishing fleet and harbour.  We did not linger long as we were keen to get to Sydney.

The drive into Sydney was relatively straight forward apart from the traffic.  We did not cross the bridge but were directed through a 3km tunnel under the river to our destination in the Surry Hills area of the city. Considering  its name, Surry Hills is not the leafy posh suburb of Sydney the title would suggest; its origins were of a working class area which has over time been taken over by the young hipsters and is now a popular and thriving area in which to live, and close to the Central Business District.  (Ring any bells with London?) As you explore Sydney, it becomes clear that the city forefathers saw London as a rival and sort of “role model city” to follow.  Many district names, street names and building names are copies from London, such as Paddington, Kings Cross and they even have a Hyde Park!  Close to us are a wide variety of restaurants and cafes but many are burger/pizza places with loud thumping music emanating from within. Not a pleasant environment for two old gits to eat. Also, a number of “Adult”shops and “clubs” added into the mix had given us a not very good feeling about this area.  Time will tell!

One last note.  After checking in we dropped the car off at Avis and were walking back when it started to rain.  This was the first rain Sydney had seen for a many a day and what started with a few spots soon turned into an absolute downpour.  Within 10 minutes, drains were overwhelmed, the roads had turned into rivers of rainwater and we even saw a wheelie bin being washed down a side street onto the road! Locals said that even for Sydney that was a bad storm, accompanied by a terrific thunder and lightning.  We heard later that one person was struck by the lightning, which also knocked out power for 10,000 homes in North Sydney and coastal area.

Rain rain go away, don’t come back ’till we’ve gone away.  Sadly it didn’t.