There are a number of highlights from our Byron Bay week which stand out.  Although we spent some time out and about, we also spent much time in Byron Bay itself, enjoying the coffee shops, the cafes and the people watching.  Below are a few thoughts and some more pictures.

Byron Bay is predominantly a young persons place.  A high percentage of those are passing through or there for a short time, enjoying what the place has to offer young folk.  Mix this with the local surf bums, buskers and chilled air then that is Byron.  We saw this sign outside a cafe which sums the place up:

Below are a few of the characters we met and spoke to whilst out and about in Byron: 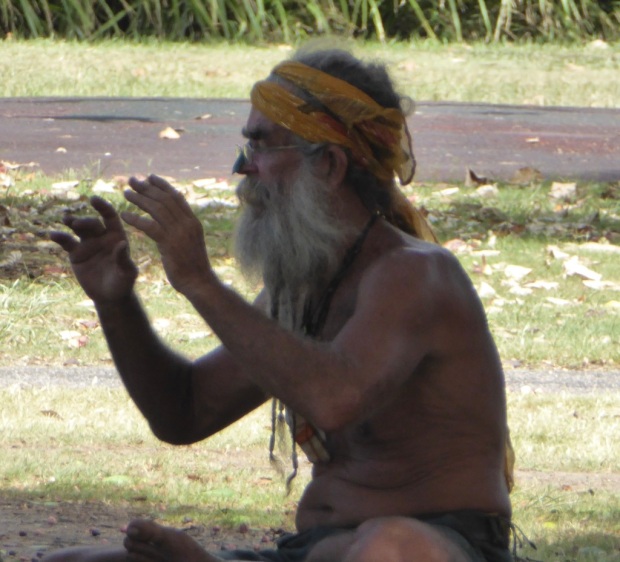 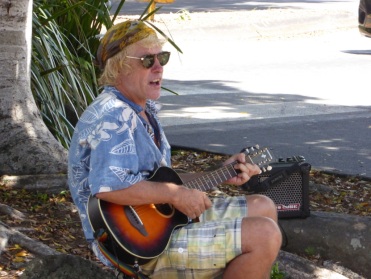 We did re-visit one place, namely Brunswick Heads.  After initially arriving and quickly departing  because we did not think it was worth stopping, we decided we had been unfair to the place so went back.  It was cloudy and very windy when we arrived but still very warm and humid. We walked out along a path leading to a breakwater which took us to the edge of a bay where the sea came rushing in and crashing against the rocks at the end.  It was very choppy rather than rough, but still did not look inviting. 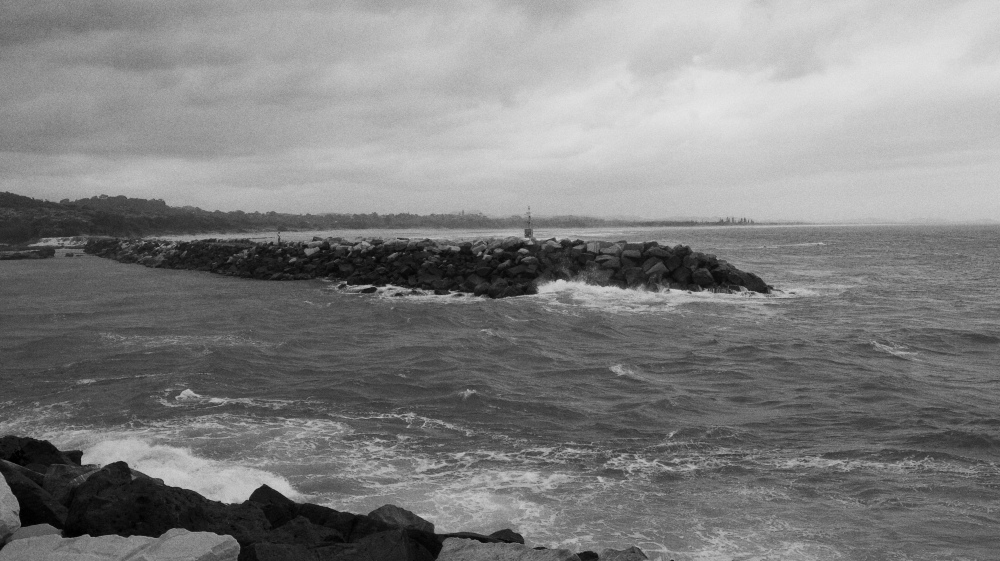 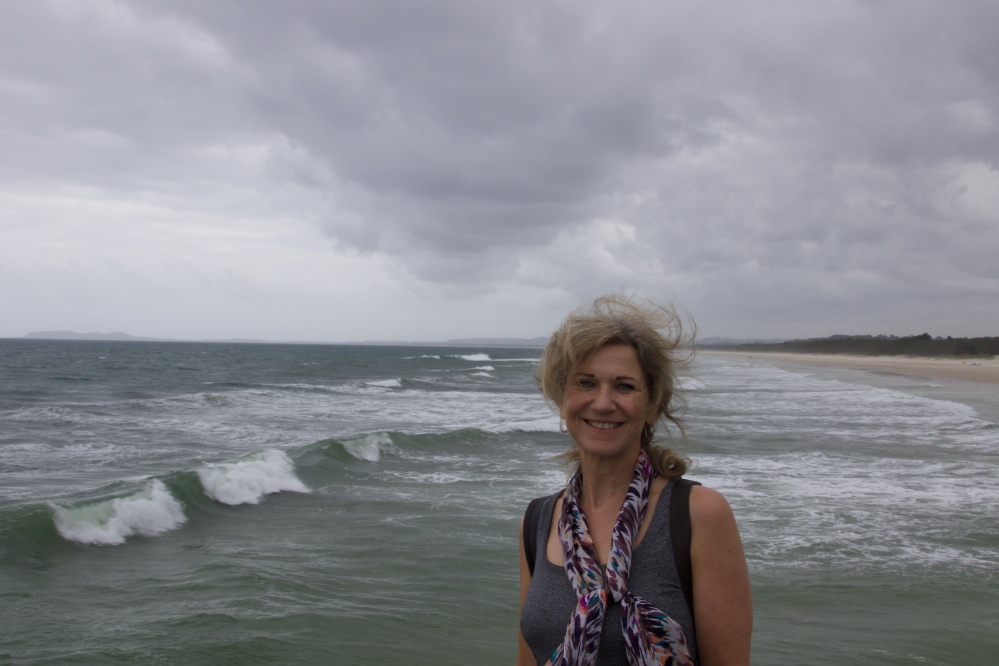 There were three other people out on the breakwater sharing and admiring the view  taking pictures, when we spotted a kite surfer out in the bay skilfully  manoeuvring herself and her kite/board across the waves.  This group stood with us at the end of the breakwater as we watched her ride with the wind toward shore, then pause, turn and run against the wind back out to sea, skipping waves and performing jumps either to impress us or to miss the breakers. She ran out to about 400m from shore before turning back once more to the beach, accelerating with the wind. She approached the beach once again, turned and must have decided to do a “fly-by” past our small gathering of spectators on the breakwater.  As she gathered speed running diagonally towards the end of the breakwater she leapt a small wave and as she landed she waved briefly before leaping in to the air once again.  At that point, about 10m from the rocks as she leapt to clear a breaking wave a gust of wind must have caught her kite and she was taken higher than she had anticipated.  Her feet came out of the board as she came down and the  board fell away, landing in the maelstrom of tide and waves crashing on to the rocks. She landed in the water, clinging  on to her kite through its harness she was swept out on the tide for about 100m. She eventually managed to stabilise herself and using a combination of the wind, her sail and a doggy paddle she began to make her way towards the rocks.  We spotted her board in the water and indicated to her where it was so with her bobbing up and down, and crashing through the breaking waves she eventually recovered it.  Reaching down she managed to get her feet back in the board straps and suddenly popped up again, riding the surf on her board. She turned back out to sea skimming way out, before running back finally to the beach and dry land.

She deflated her kite and removed the board from her feet and came up to us on the breakwater to greet us all. We chatted for a few minutes to get her version of the story.  She did think we would have to get the Lifeguards out for her if we had not spotted her board.  A very lucky escape.  There are a few pictures below but Lyn shot some video which has been uploaded to our Facebook page. The three videos are well worth viewing.

Her name?  Natalie Figanblat, an Israeli girl out here teaching Kite Surfing, believe it or not! 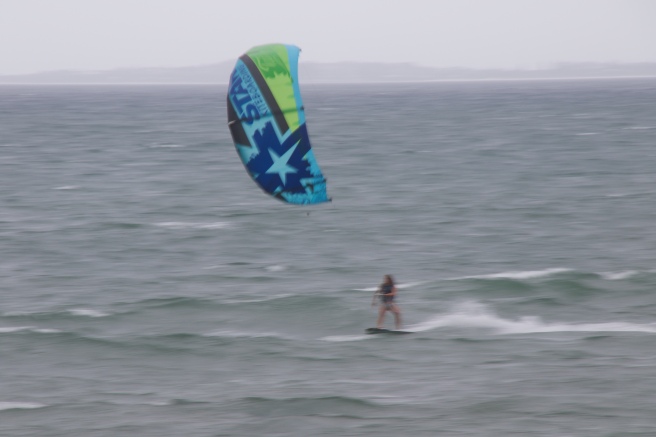 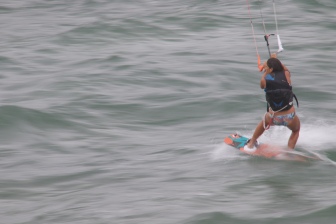 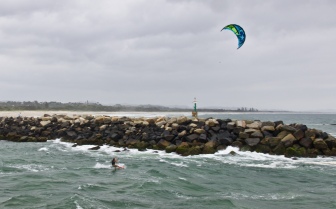 Girl on a Kite 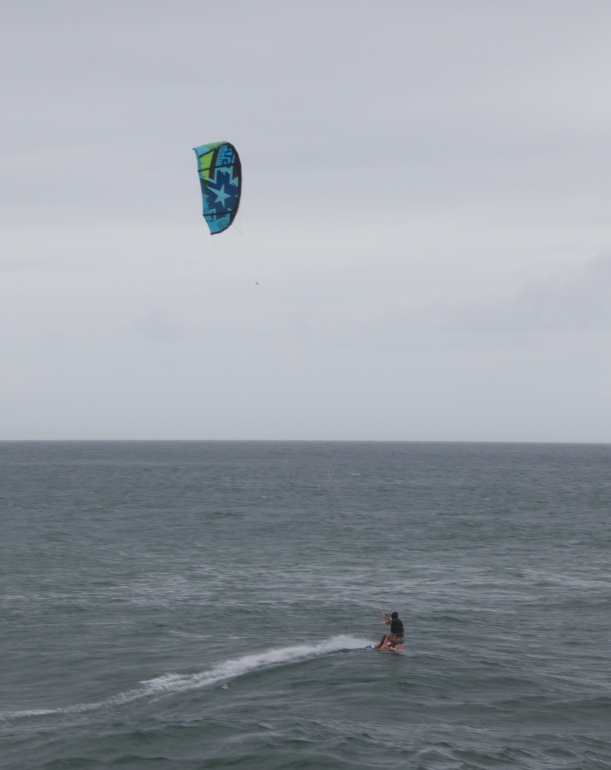 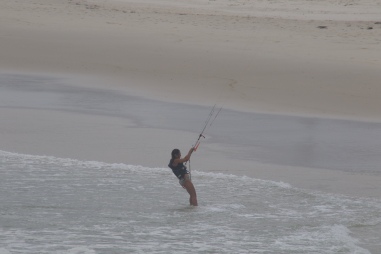 Going, Going…….Where’s my board?  Back on dry land.

One of the things I will remember about Byron is the wonderful late afternoon/early evening light, ideal for a bit of land/seascape photography.  Sadly I did not bring my tripod so every shot had to be hand held, which proved to be a bit of a challenge.  The first early evening expedition was to Tallow Beach, about 10 mins walk from our apartment.  To be on the beach and to have it to yourself as the tide comes in and the sun goes down is a very special experience.  What is not so good is standing ankle deep in he water as the tide comes in and getting my shorts soaked by a large wave that rushed up to my thighs.  Luckily I kept my camera dry!

Scenes of tallow Beach at Sunset 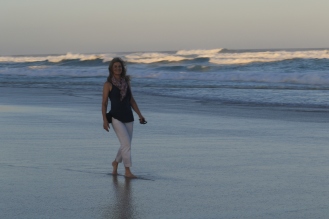 We were also blessed with fantastic light on our last evening in Byron as we made our way to the Cape Byron Lighthouse, perched on the clifftop high above the town.  Again the light was clear, but there were more people there, which made getting some shots quite difficult.  Annoyingly one guy turned up with a drone which he launched, disturbing the relative peace and quiet with a wasp like buzzing noise.  We still managed to get some lovely shots though. 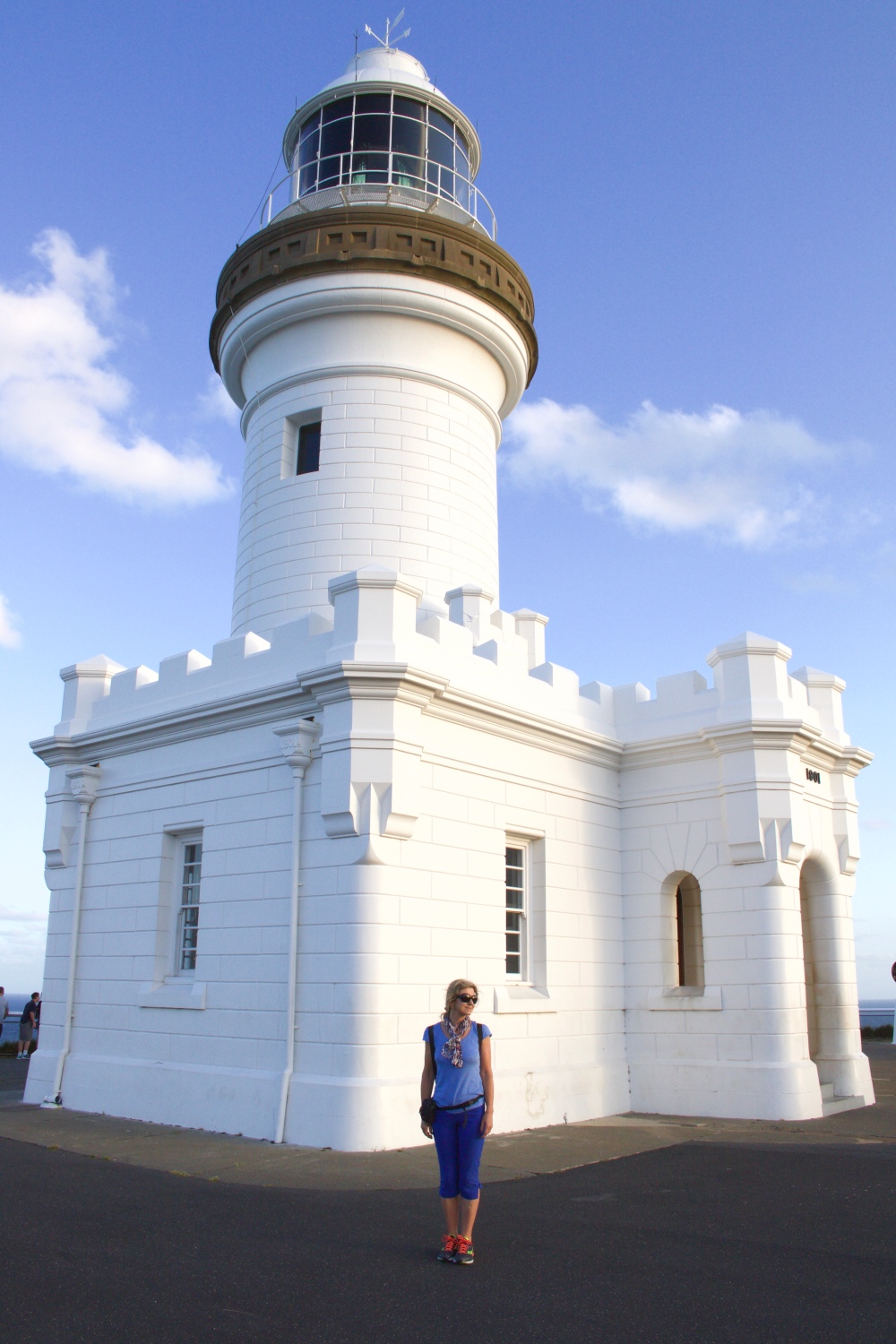 Some images from Cape Byron Lighthouse