Since we started the East Coast Tour from Noosa to Sydney, one thing that has been relatively consistent is the heat.  Regular temperatures above 32deg C are common.  (I’m not complaining, honest!). The locals are very concerned because this is the rainy season in Queensland and Northern New South Wales and the rain has largely gone missing although it has rained very occasionally during the night.  I am sure there is no sympathy for us as the UK freezes in the depth of winter and gets another dusting of snow.  The hot sun has other less pleasant consequences for this area, namely bush fires. We found out today (Sunday) that there are currently over 80 burning in New South Wales alone, and of those around 5 are classed as “Emergency” where people have been injured or lost their homes.  A further six are what they call “Watch and Act” i.e prepare to evacuate.  A sobering thought.  The reason for mentioning this is that we saw today on our way to Ballina, a town to the south of Byron Bay what a Bush Fire looked like fairly close up.  And as you can see from the pictures it generates a great deal of smoke into the atmosphere, fuelled today by a strong wind.  These pictures were shot from a look out point on the cliffs close  to Lennox Heads. Luckily this one was under control believe it or not, but the smoke can be quite acrid and very unpleasant downwind.  Our concern is that as we head south later this week, one or two of the emergency classifications appear to be on  or close to our route.  We will wait and see what happens.

Above:  Panorama shot of the bay and bush fire.

Anti-Clockwise from top:  Views of the bay and Bush Fire; Top right: Hang gliders ready to launch off the cliff top.

More on Ballina later.  Previously, I have written about how hippy culture has influenced  the atmosphere around Byron Bay.  This culture flows from the many towns and villages that surround Byron and we have visited a few this week, not because we are ageing hippies, more out of idle curiosity and that there may be something interesting to see, other than a surfers beach! .

Several people told us when they knew we were coming to Byron Bay “you must visit Bangalow, it is beautiful and relaxed.  A lovely place”.  So we did.  Like many villages its main street is its best feature and where the life and soul of the place lies.  The buildings along the main street have a unique character, and whilst neither of us are given to spending loads of time mooching around the shops, Bangalow’s charms soon work their  way into your subconscious and you can spend a pleasant couple of hours or so having coffee in one of the many cafes and wandering around the variety of shops on the main street.  As we returned to the car we passed a primary school playing field where a group of children were playing what looked like a cross between cricket and rounders,  all dressed in their green and gold kit, the Australian colours for team games. Potential stars of the future? Who knows but such a charming sight. Remember, the greatest of them all, Sir Don Bradman grew up in a New South Wales village in the middle of no-where. 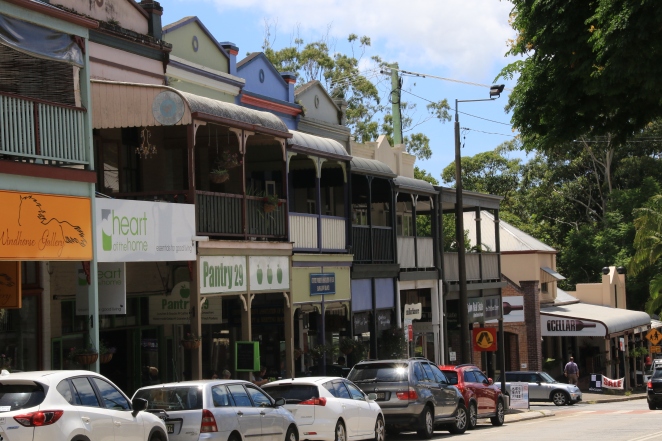 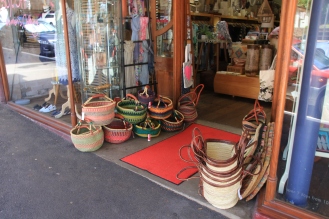 After a very brief stop in Brunswick Heads, mainly to do a U turn and drive out (it was so uninspiring and dull) we moved on to the wonderfully named Mullumbimby, known to the locals as “Mullum”. It promotes itself as the biggest little town in Australia. It lies at the foot of Mount Chincogan in the Brunswick Valley about 9 kilometres (5.5 miles) by road from the coast and sits on the Brunswick River.  Its wide streets give it an air of spaciousness but at the same time it looks a bit tatty and unkempt. Again many cafes to chose from and an ideal lunch stop on our mini tour of the Byron Hinterland. In case you were wondering where the name came from, it is what the Aboriginal people called it and means ‘small round hill’, although the dominant feature in the area is a mountain called Chincogan though is probably too prominent in the landscape to fit the name.

Our last stop on todays mini tour was at the even better named Murwillumbah.  This involved a drive along the Tweed Valley and was a delightful run, reminiscent of driving in the Peak District without the traffic. Murwillumbah sits on the Tweed River and boasts a World Heritage Rain Forest Centre and the Tweed Regional Gallery.

The Rain Forest Centre combines with the local tourist office on the Tweed River in the village.  Outside the centre is a collection of rain forest trees set in a small landscaped area  alongside the river.  The Centre has exhibitions and a photo and art gallery which gives information on the preservation of the rain forests in Australia. Interesting fact time (or not, depending if this is your thing): The area around Murwillumba  is allegedly used for filming of the British version of the reality series, “I’m A Celebrity…….Get me Out of Here.” Bear in mind that the Aussie way of using the expression “around here” could be anything up to a couple of hundred miles away! And yes there is an Aussie one which is on air as I write. 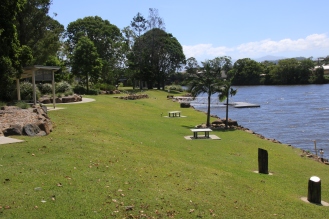 A short drive from the centre is the Tweed Gallery.  It is a modern building sitting on a hill above the village and has some marvellous views towards the hills and mountains to the west.

The gallery is in two parts.  The first features work from a large number of international artists, and is well worth a look.  The second part is dedicated to a significant benefactor to the gallery,  Margaret Olley.  One of the volunteers told us that in her opinion, her work was of average quality but she made a great deal of money in selling it, so that when she died she donated all her work to the gallery and A$1 million so that the Margaret Olley Wing could be established and her work displayed for all to see.  There are also rooms from  her home re-created so all can see how she lived.  Untidily is the impression given, but we are told she knew where to find everything! I have to say that I agreed with the volunteer.  Some of Ms Olley’s work was okay but most of it was rubbish.  However, who am I to judge, she did donate a million dollars to the Tweed Gallery so some people must like her work and it has increased their visitor numbers significantly.  The rest of the works on display were of an excellent standard.  The most outstanding piece for me was a detailed head portrait of an Aboriginal man.  From a distance the artist had captured every detail and wrinkle in his forehead.  Close up it was even more spectacular, considering it was painted on a canvas at least 2mx2m.  Stunning. 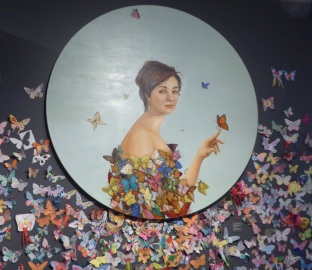 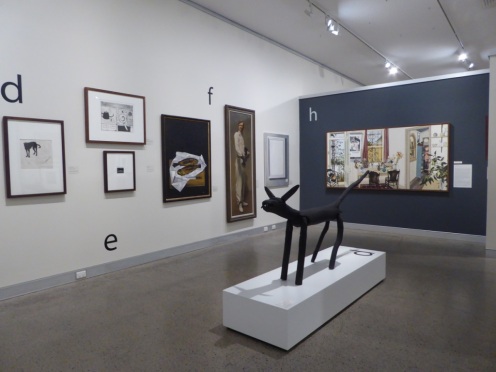 Above:  Some of the Art work on view at the Tweed Gallery

Ballina is just down the coast from Byron Bay and lies at the mouth of the Richmond River.    In days gone by its main output was timber but these days it’s main trade is tourism.  It is altogether a lot quieter and calmer than Byron despite having three times the population and when we visited on a very hot and humid afternoon, the main focus for locals and tourists alike was the large lido.

We had come to Ballina to visit the Maritime Museum.  The town has a strong seafaring tradition, through the shipbuilding which was here following the second world war and through the many ex Australian navy personnel who came to work in them.  The museum itself was quite compact but stuffed full of exhibits, models of old ships, memorabilia and articles of battle fought by the Australian Navy through time.  Of main interest to most people is the original Balsa wood raft used by a team who sailed from Ecuador across the Pacific that docked in Ballina after the crossing in 1973.  It set a record (at the time) for the longest known raft voyage in history of around 9,000 miles.  Why?  To prove that the Pacific Islands could have been populated by migrations from South America in the centuries before the Spanish Conquistadors arrived.  The raft itself takes up one end of a small exhibition hall and with other exhibits spilling over, it is quite hard to gain any impression of how small this thing actually is. Despite that, the museum was worth the visit to view the models made of some of the most significant ships involved in the sea  battles of the second world war, both in the Atlantic and Pacific fleets. 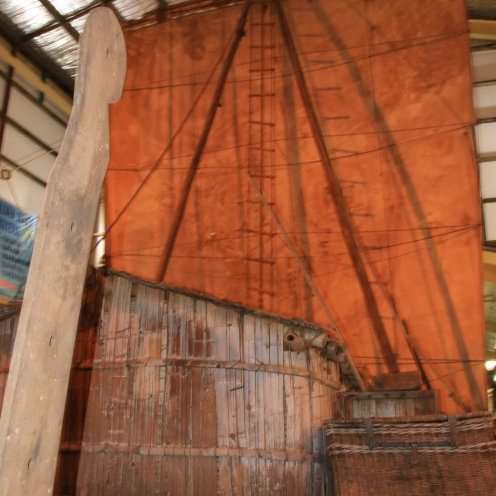 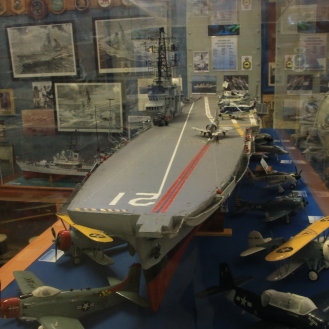 Clockwise from bottom left:  Three views of the Balsa raft “Las Balsas”;  The dangerous end of a Mk 9 – 21inch WW2 Torpedo – you are only safe from this at about 7010yds;  Model of HMAS Melbourne – a light Aircraft carrier of the RAN Fleet.

By the time you read this, we will be on our way to Sydney, a three day road trip, taking in Port Macquarie, Nelson Bay and finally Sydney, arriving hopefully on Friday.  Over the next couple of days I will compile another blog with some other highlights from Byron and our thoughts on what has been an interesting experience of an alternative lifestyle.

Bye for now from us.