Please Note:- The first edition of this blog was published in error.  This is the finished version.  Apologies for the inconvenience.

“Cheer Up, Slow Down and Chill Out”. So said a sign as we approached Byron Bay.  As we drove in we could see why.  Surf bums and backpackers everywhere and not a tower block hotel in sight.  More on this later though.

The journey from Noosa Heads had been largely uneventful save for the arrival of a monsoon rainstorm just before breakfast which thankfully stopped as we departed.  The other sight as we drove south of Brisbane on the Bruce Highway, (yes, that motorway again) was a bush fire raging off to the left as we headed south.  No flames but thick grey smoke drifted low over the motorway making visibility very difficult especially as above this a layer of rain cloud, slightly whiter in colour created a two tone colour effect that was quite bizarre.  Sadly no pictures of this, I was driving and Lyn could not get to her camera or phone in time.  Oh, and the woodsmoke stank which is what decided for us that it was a bush fire. One more thing, as we crossed the border from Queensland into New South Wales, we were advised that we moved to anew time zone.  For some strange reason NSW are on Daylight Saving Time which means they are one hour ahead of Queensland.  Not significant but if you are crossing the border to visit a gallery and you make it late at say 4pm, it is 5pm NSW time and the gallery has closed.  Yes it does catch out many Queenslanders!

On arrival at our new apartment we went into the same routine, drop bags, find supermarket, David keeps quiet, pushes the trolley whilst Lyn gets all we need for the week, go back, unpack and chill out with a glass of wine, whilst congratulating ourselves on a successful trip. We also looked at a local area map to see where we are in relation to the town and the local area and what we can look forward to for the week.

Some thought that Byron Bay was named after the poet, Lord Byron.  Indeed many of the streets are named after poets.  In fact, it was Lord Byron’s Grandfather John Byron, Capt.  James Cook’s navigator, who first sailed the expedition into Byron Bay and therefore Cook decided that  this Cape which gives the bay its name, and is Australia’s most easterly point, should be named in honour of his navigator.

Our apartment complex is about 20 mins walk from the centre of Byron but 400m from the nearest beach which is intriguingly named Tallow Beach.  We can hear the roar of the surf as it crashes on to the shore and a run down there early morning revealed a beautiful expanse of sand, surf and spray. It is 7.5km of wide expanse of beach and the tide races in at quite a fast rate.  The advice is not to swim or surf without experience because it has no lifeguards and the tidal race causes severe rip currents that could do serious damage to your long term prospects should you get caught in them. 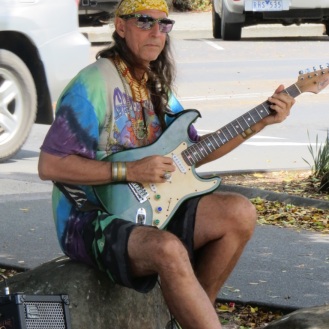 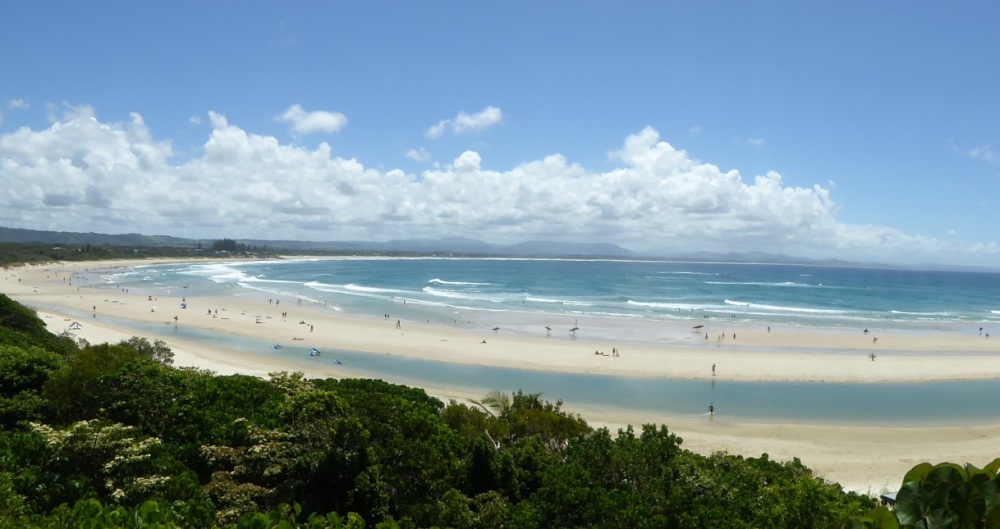 Panorama of Byron Bay from the cliff top

Byron Bay lies very close to the Gold Coast, which is the host city for the 2018 Commonwealth Games.  The contrast could not be more startling.  The Gold Coast is Australia’s Benidorm; high rise apartment blocks are everywhere, commercialisation is rampant and the crowds flock to the surf, the nightlife and the beaches.  Byron is different.  Yes it is crowded and very popular with the surfing bunch but the locals have strongly resisted the developers urge to destroy everything in the pursuit of money,  so that the area has none of the high rise gaudiness of its near neighbour to the North.  Also it has not given way to the scourge of  corporate retailers so the only international brands are a Subway and Aldi.  Every other outlet is locally owned which gives a very wide variety of shops and cafes to suit all tastes.

It is quite difficult to describe the atmosphere in this place.  Many of  the villages in the hills that surround Byron, have a strong hippy culture stemming from the Aquarius Festival held in a nearby village in 1973.  This culture lives on and has spread widely across the area flowing down into the Byron. It has combined easily with the laid back surf community prominent here and created a wonderfully chilled alternative lifestyle mash-up. There is no formality, everyone is in shorts, T shirts (or less) and flip-flops or sandals and many have surf boards tucked under their arms. Dreadlocks are not an uncommon sight and Lyn suggested  we join this trend. However, as my hair is slowly receding from the top and the front we decided that grey “dreads” real or artificial are not good look. I would look like I had a mop on my head! The cafe culture is strong here, and the wide variety of foodie outlets means that all tastes are well covered.  There are plenty of Backpackers hostels and we came across one called the Arts Factory whilst out exploring the town.  Tucked away in one corner, close to the old railway station it is advertised as a place for artists to gather and do their work. A Yoga studio was also advertised but when we asked the guy behind the counter where it was he just shrugged his shoulders and pointed “round there I think mate”.  We never did find it in the throng of newly arrived backpackers.  There is a recording studio which was active as we walked by, however the discordant disjointed noise emanating from within would suggest that the band rehearsing have a very long way to go before they could even think of playing Wembley Stadium or the O2!

L-R: Tin Man sculpture outside the Arts Factory; Us on the walk to Cape Byron; Lyn compares herself to a Dolphin.

On the other side of town is the walk up to Cape Byron and the lighthouse.  There are many tracks on the Cape, leading to beaches, through nature trails and on to the Lighthouse.  Again the surfing culture is to the fore with many people with surf boards walking or cycling to the beach for an afternoon of fun. Dolphins can also be sighted in the bay, though we did not see any on our walk around.  We spent a very hot afternoon exploring the paths and tracks around the Cape, and decided to return for some sunset photographs later in the week.

It is difficult to resist getting drawn in to the chilled out and relaxed vibe that exists in Byron. Long hot days and lazy evenings sat on the balcony or in town people watching could be what we do.  There is a wide area to explore and this is for the next blog.