In the last blog I described Noosa Heads and what it is like to be here. (Great).  But there is no point in staying somewhere if you don’t explore the surrounding area to get a feel for the place and we had a whole list of places to visit that we had researched ourselves, friends and even people we did not know (a young ex-pat  girl from Manchester we met in Brisbane) had advised “you must go there”.  We edited the list down to things sensible and within our capabilities.  So the off-road drive to Rainbow Point was out as the car was not designed for that sort of road. Fraser Island was ruled out as it meant going on a boat and after Lyn’s experience on the Reef there was no way she was getting on a boat after a 90 minute journey by mini-bus.  We settled on a combination of driving trips and walking trips, oh and a boat trip on a river.

So to the local area.  The Noosa area is a well spread out chain of villages lying on the banks of the Noosa river.  The best way to explore these places is by boat.  A ferry operates between Noosa Heads and Noosa Marina/Tewantin and has 7 stops en-route.  It is hop on-hop off so you buy 1 ticket which lasts all day so you can set your own timetable.   We decided to make straight for the Marina, as far up the river the ferry can travel.  After that you go by Kayak which you can rent at the Marina!  The trip took about 40 minutes and our boat driver kept us well entertained with stories of how the posh houses on the river front came to be built, how the area floods and what the council is doing.  Seems they have the same bureaucratic bumbling that we so often suffer from in the UK. He did however recommend a couple of places to visit. 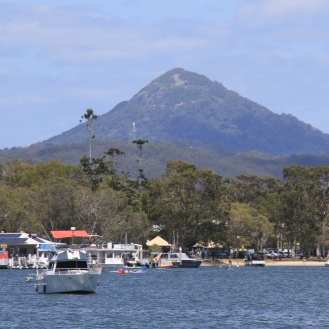 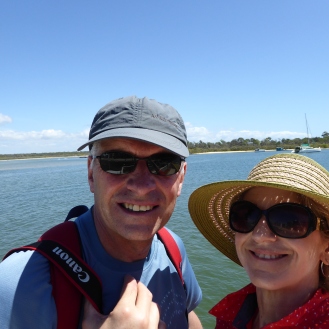 A speedboat passes the ferry

Noosa Art Gallery is not far from the Marina so we dropped in for a view.  So far we have not paid for entry to any gallery, garden or museum…all free.  Are you listening UK!!! And this was no exception.  It was exhibiting work by local artists and some of it was very good.  There are the usual “What is that?! exhibits but on the whole you could get an understanding of what the artist was about. 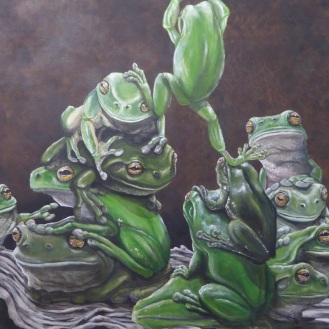 Some of the exhibits on show at the Marina Gallery

There was little else in Tewantin to rave about  so it was back to the ferry and lunch 3 stops back up the river. Noosaville, as most resorts along  the Sunshine Coast are well blessed with cafes so it was no problem finding somewhere to eat.

The Lonely Planet Guidebook mentions a collection of Australia’s “Big Things” located in odd places on the around the country. There are garish odd looking bad taste sculptures and Queelsland’s Sunshine Coast has six of these tucked away  in odd places.  Noosaville plays host to one of these, namely a 20ft caricature of a Pelican. There are others such as a big Pineapple, and a big Macadamia nut dotted about the place but after seeing this thing, we had no intention of completing the list of six!  Judge for yourselves from the pictures.

I am surprised I did not have nightmares after seeng this thing!

Inland from  the coast is the Sunshine Hinterland, a ranges of hill and mountains in which many small villages and settlements nestle and co-exist.  One of these villages, Eumundi plays host to a huge market each Wednesday and Saturday.  A quiet quaint village comes alive with over 300 stalls selling everything from hand made soap to simple home made guitars, and home made jewellery to wood carvings.  There was even a local playing an electric Digeridoo accompanied by electric drums.  Haunting but it sounded vaguely 70’s Pink Floyd and oddly quite good.  The main street in Eumundi has many traditional buildings (single storey of wood construction) and it does feel a little like stepping back in time. 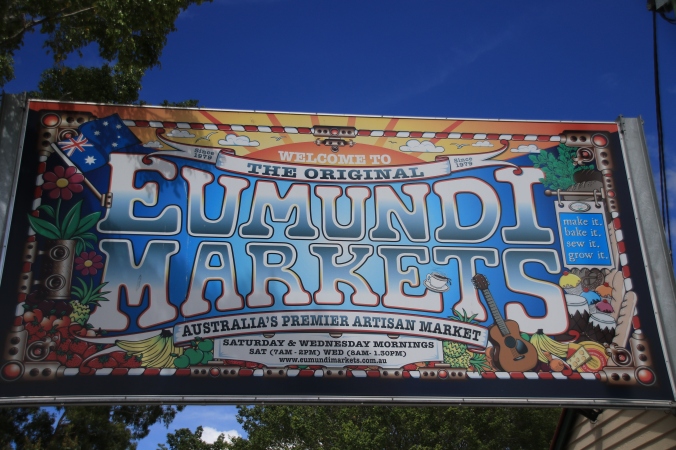 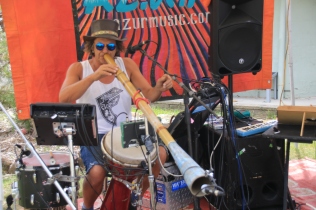 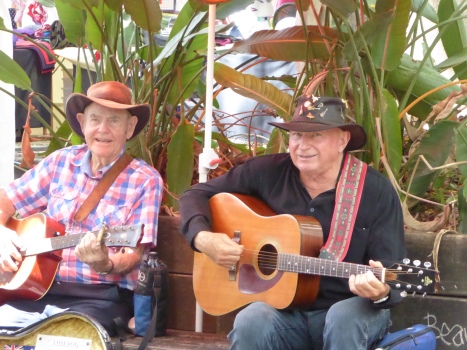 About 25 minutes further on is the village of Montville which sits atop a long ridge 500m above sea level.  Originally the village was called Razorback by the settlers who first established it but this name does not sit well with its current attraction, cafes, fudge emporiums.  It is reminiscent of Devon villages with tearooms and craft shops.  The biggest feature is the Secrets on the Lake, a cafe/hotel/restaurant with treetop walkways and hideaway rooms with views over the Baroon Lake.  On the down side it was expensive and other than the shops along the main street there was very little else to see.  Even the guy in the Tourist Information Office struggled to sell anything other than the shops to us.

The last village on our one day road trip was Maleny.  Again nestling in the mountains, close to Montville this town is a lovely mix of artists and other creative souls who have worked together to maintain the cooperative ethos that underpins the community.  Each shop is something slightly different and there is an arcade of small units at one end of the main street that has  charming variety of outlets.  It is said, a group of hippies arrived in around 1967 and never left!  Today Maleny retains that hippy laid back and co-operative feel but shows a commercial edge and opportunity. 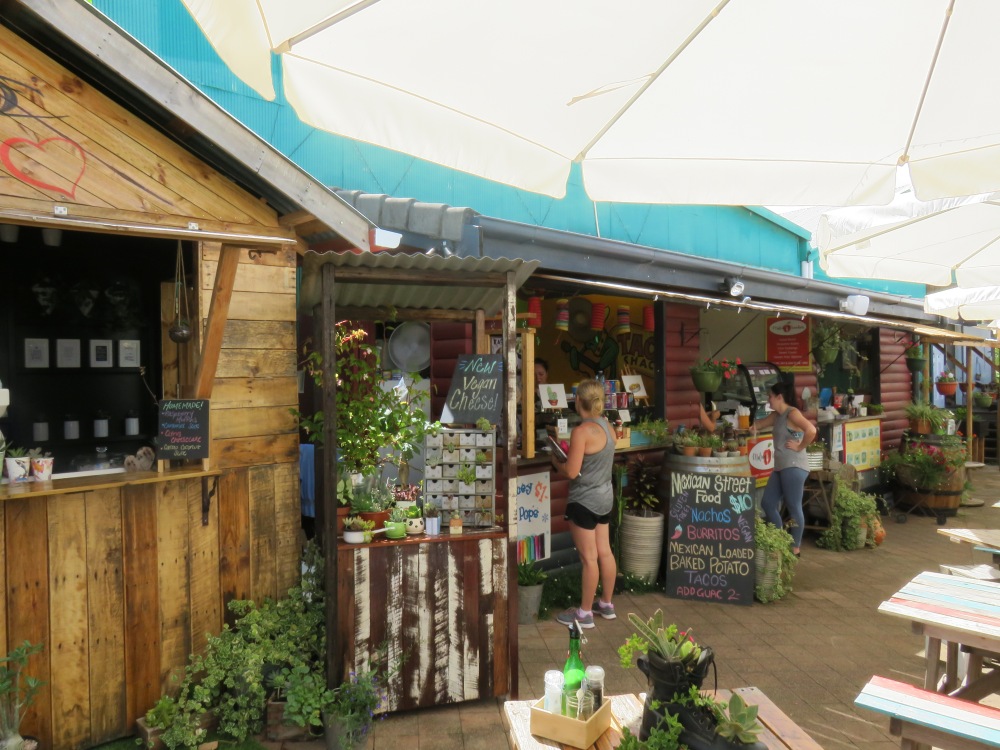 The sunshine coast is blessed with miles and miles of beaches, all clean and smart and served by a Pacific Ocean which rushes in creating good surf.  No wonder the Sunshine Coast is known for its surf. At the southern end of this chain of beaches is a town named Caloundra.  Noted as an up and coming beach  resort, the particular interest for me was the Queensland Air Museum, co-located with the Sunshine Coast Airport about 3km north of the beach front.

The Queensland Air Museum is small by comparison with somewhere like Duxford for example, but it does have an eclectic mix of old and very old military and civilian exhibits and I found it very interesting.  For those who have no interest in aviation and aeroplanes there is very little, just  a few plastic chairs in one corner of a small hangar, a coffee machine, and a small shop selling souvenirs of the museum and plastic Airfix kits! Lyn said I could fill my boots for an hour or so so I did.  She took the I-pad and sat on the chairs to write. Highlight for QAM is one of the ex RAAF F1-11 jets with a ladder up to the cockpit so you can see inside.  This jet has a shed to itself and loads of info.  It is their prized exhibit.  Other exhibits are in a large hangar crammed with stuff and a small grassed area between the F1-11 shed and hangar. The place is run by a committed group of volunteers and is funded jointly by voluntary subscriptions, an entry fee of A$13 (about£7-50) and private and public benefactors.  It was well worth the entry fee. 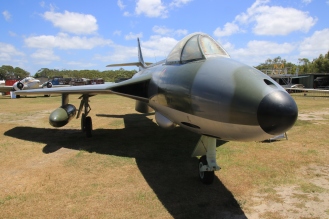 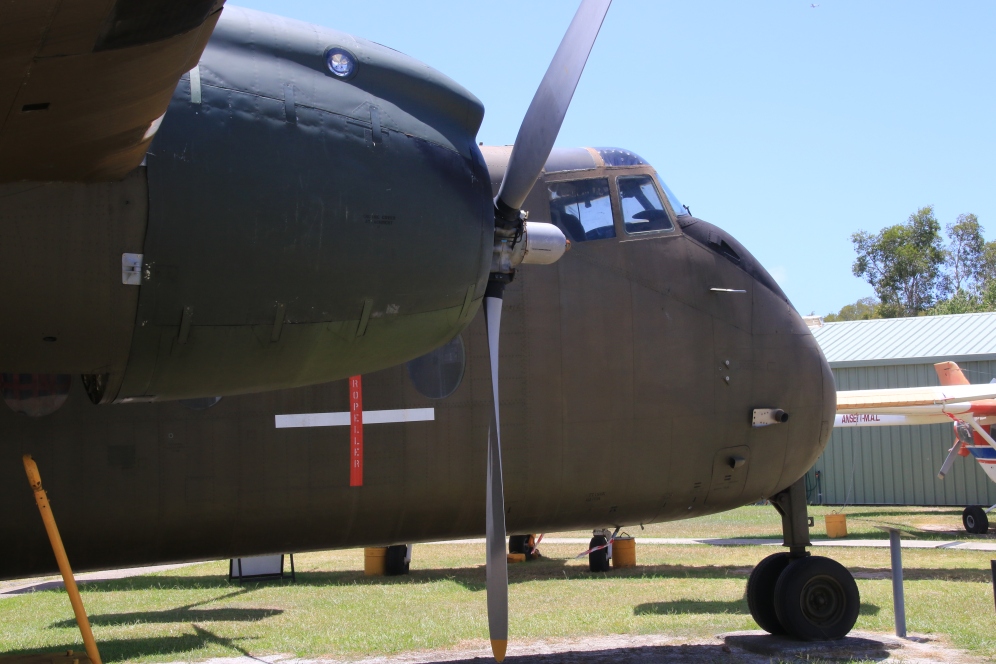 On our last afternoon we were out and about to the Noosa Botanical Gardens.  Oddly not in Noosa but about 45km away on the shores of Lake MacDonald. Like many gardens it is free to enter and is a quiet haven of calm and peace.  One generous benefactor gifted funds towards an amphitheatre which is  a feature of these gardens.  Built into the side of the hill it overlooks the lake and is a wonderful setting for events.  They do performances there but the main source of income for the Amphitheatre is weddings.  I can understand why.  The remainder of the garden has many areas of planting and landscaping.  A very pleasant afternoon, and free! 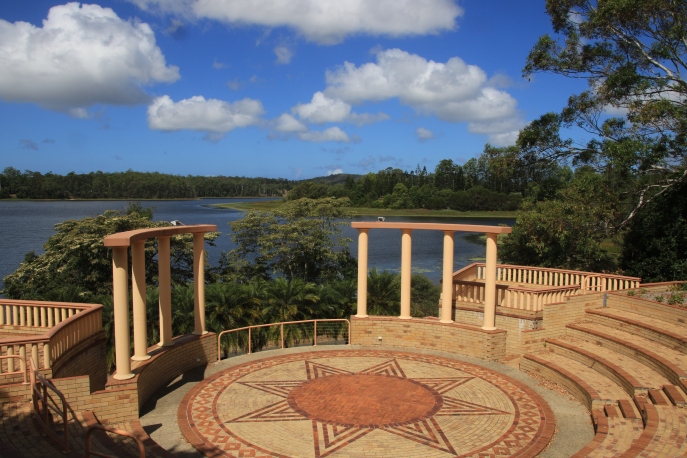 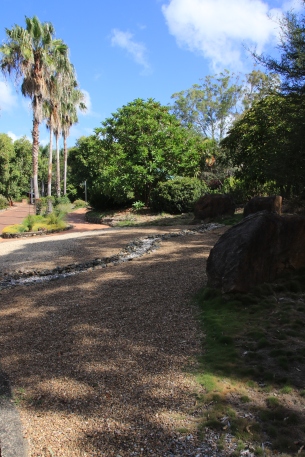 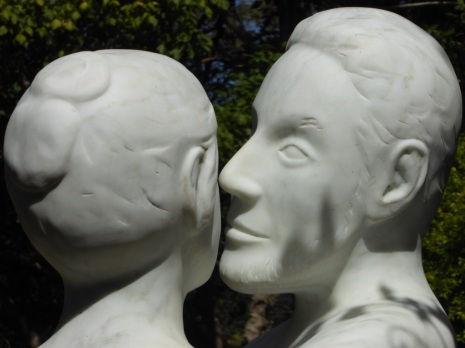 Anyone who knows Lyn well, knows that she is a yogi. She took up yoga in 2009 when she was diagnosed with arthritis in her right hip and was told she needed to stop running or she would need a hip replacement in 3-5 years. Well, 8 years on, her hip is fine, she still runs (or speed walk/jogs) but is now dedicated to her own daily yoga practice and attends two classes a week. Her commitment to yoga surpasses the physical aspects (yoga asanas) and has for her become a spiritual path. Yoga is big in Australia and very much part of the holistic lifestyle of health and wellbeing and the added beauty is you can enjoy yoga in the open air! 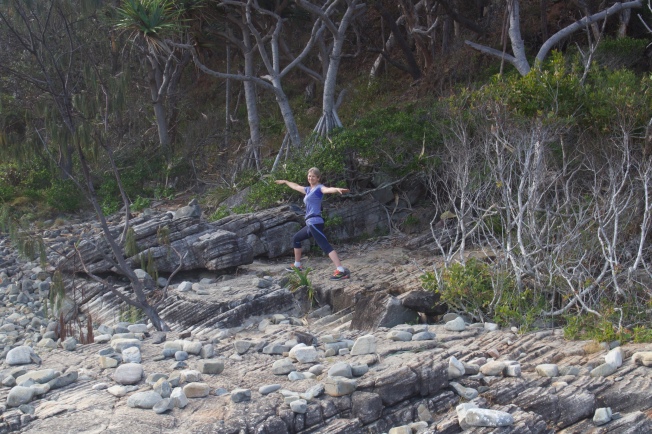 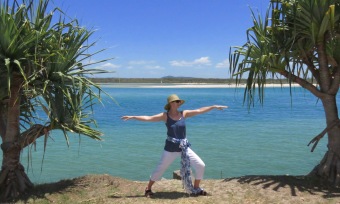 As many people will know, Lyn and I are ‘doggie people’ – we were before we met and continue to be now, even though we no longer have our Little Man. Wherever we are in the world, we always ‘ooooh and ahhhh’ over the dogs we see and meet and here in Australia is no exception. We love it that the Aussies appear to love and look after their pooches. In Noosa, as we have already mentioned, the dogs have their own dedicated beach and bay for swimming. We couldn’t resist going there for a swim and meeting the dogs and chatting to the locals who like caring dog owners everywhere, love to talk about their dog. 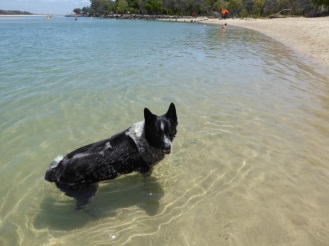 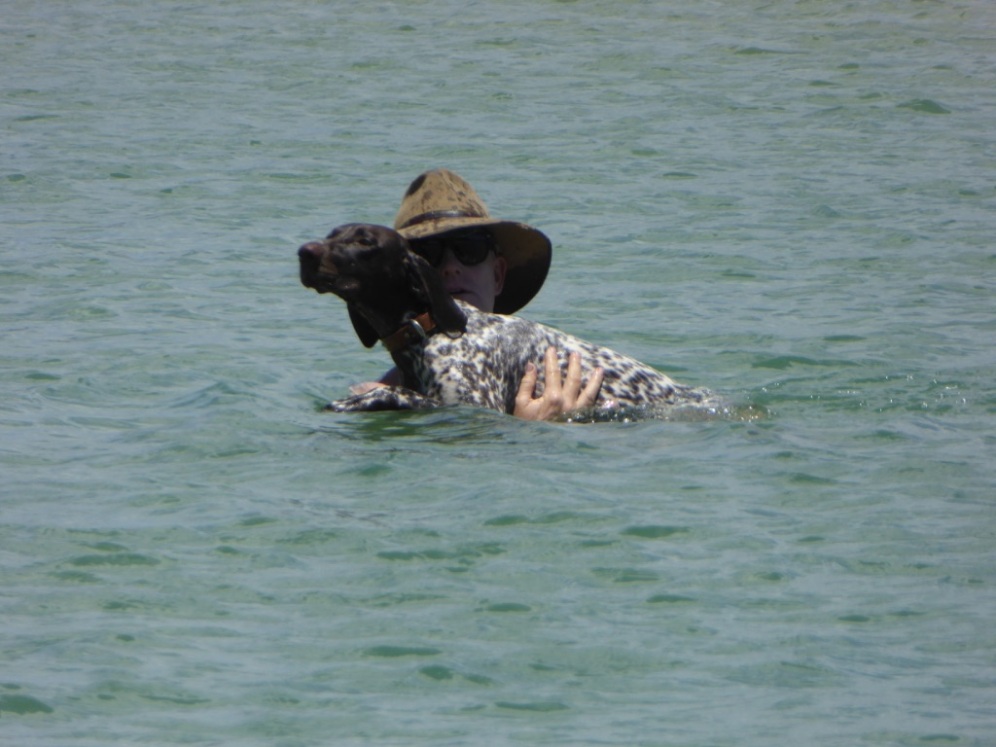 By the time you read this we will be in Byron Bay.  There are some serious internet issues in Byron which has delayed the publication of this blog.  Apologies for that.