No, not a new film of outakes from Sid James films, but more on the melting pot that is Sydney.  Having done the history, and the walking tour, we set about discovering Sydney for ourselves.  This would involve many miles of walking, ferries and meeting friends.

Circular Quay is the main ferry terminal for Sydney.  It is also home to the many tour companies offering trips around the bay, either by motor launch or powerboat.  It also has a berth for one Ocean Liner, there are others around the bay but this one gets you closest. We found out yesterday (25 Feb) that the new Queen Mary II was in port, having rendevoused with her sister ship, Queen Elizabeth in the bay.  I think the intention is for then to leave in formation on Sunday.  That will be impressive.

Our first ferry ride was to Cockatoo Island. Called Wa-rea-mah by the Indigenous Australians who traditionally inhabited the land prior to European settlement, the island may have been used as a fishing base, although this is speculation by historians as no-one has found any evidence to this.  Between 1839 and 1869, Cockatoo Island operated as a convict penal establishment, primarily as a place of secondary punishment for convicts who had re-offended in the colonies.  Along with the penal colony the island was  being developed as a ship building hub and became one of Australia’s biggest shipyards, operating between 1857 and 1991. The first of its two dry docks were built by convicts.  Sadly it is no longer operational and closed as a shipyard in 1991.  Many of the factories and dockside cranes still exist, but are slowly rusting away. The factories that remain are empty and many locked although you can still look inside one or two through windows.  In 2010 the island was granted UNESCO World Heritage Site status because of its historical role as a penal colony.  Some of the old prison buildings can still be seen although many were demolished for the factories.   Life was extremely tough for the convicts as there was little or no prospect of escape and they were treated very cruelly by the guards, a collection of Marines.  Prisoners shared their cells with rats and other vermin and many did not survive. There are many stories and accounts written by former prisoners on display many highlighting the brutal treatment of the guards.

It is possible to stay on the Island.  There is no luxury hotel or guest house, you go Glamping, that is posh camping for those without the knowledge. A number of permanent tents have been erected on a large grassed area near the ferry terminal.  These have 2 beds (of the camping variety) a mattress for each bed, electricity and a kettle to match, and two deck chairs sited outside the door flap.  You can rent these tents quite cheaply but once the last ferry leaves at about 7pm, you are stuck for the night. There is a cafe to cater for those who are glamping  overnight but thankfully that was not our intention. 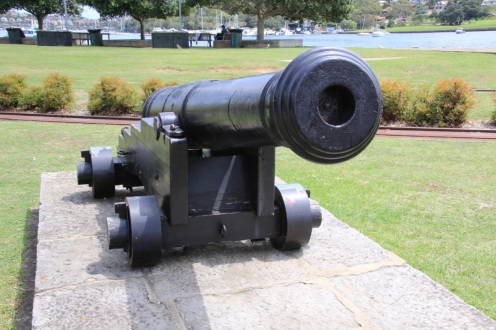 Left: Cockatoo Island Prison block:  Do they use this to keep the campers in order.  Cannon next to the campsite.

Leaving Cockatoo Island we made our way across to the North side of the bay to Milsoms Point, the stopping off point for those who wish to walk back to the city across the bridge, which was our intention later.  Altogether much quieter than its brash neighbour in the south of the bay area  the first thing you see when  you step off the boat at Milsoms Point  is Luna Park, an amusement arcade, but this is the only concession to the mad world of the south that we saw.

Our reason for coming over was to meet up with friends who happens to be living in Sydney because of Jim’s work.  Robin is a volunteer at a local animal hospital and whilst we were there she showed us two baby Ring-Tail Possums she was currently hand rearing because the mother had died.  Lyn was bessotted  with these tiny babies and held one whilst Robin fed the other.  It was wonderful to meet up and be hosted in their home, after weeks of hotels and apartments.  Thank you Robin and Jim.

Their apartment block is next door to the home of one of Australia’s most notes artists, Wendy Whitely. She was the partner of Brett Whitely whose paintings of the Harbour Bridge are well renown.  When Brett died in 1992, Wendy channelled her grief into building a garden on some sloping land in front of their home.  What started as derelict railway land, overgrown and filled with rubbish became  a beautiful, peaceful garden, a little gem, a paradise nesting around the busy rail line and the streets of traffic above.  The garden is permanently accessible to the public except when weddings are held there. 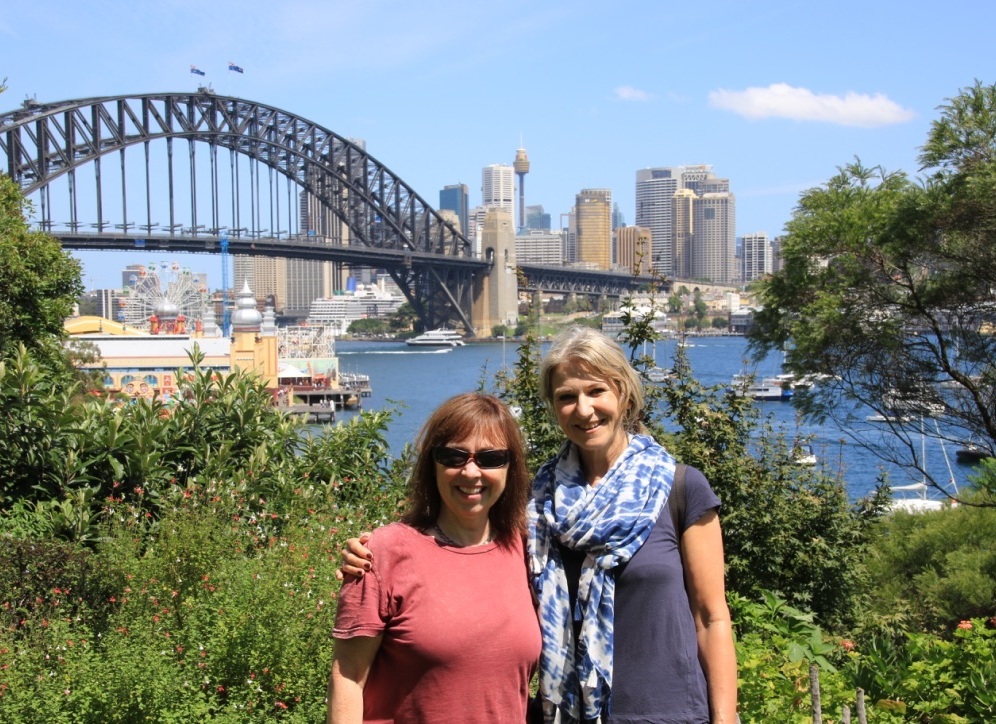 Clockwise from top left: Lyn and Robin; Waterside units on the crossing to Milsoms Point; Views of the bridge from Lavender Bay Gardens

Our walk across the Harbour bridge was another highlight, despite the noise from traffic.  As it was later in the day the light was less harsh and the views of the Opera House were even better from above.  There are permanent guards on patrol to prevent people from jumping off the bridge although it is very difficult to clamber over the high fencing and barbed wire that line the route.  Tours run that enable you either to climb one of the stone pylons fro a view from the top, or for A$200 you can walk the arch of the bridge.  No cameras, but they will sell you a picture of your walk for around A$30 a go.  We politely declined. 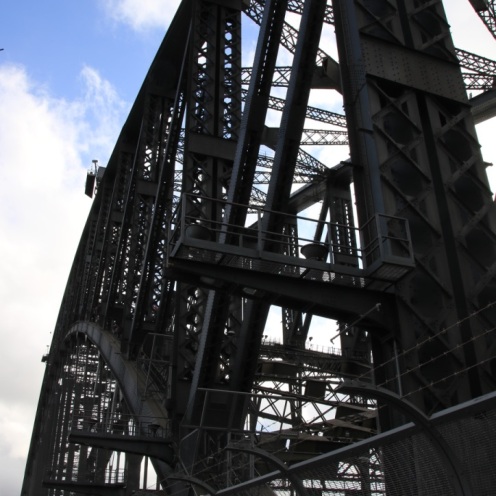 Top: Robin, Lyn and Jim on the bridge. Bottom: Opera House from the bridge and the bridge close up.

Talking of walking, there are some lovely walks around to Mrs Macquarie’s Point, which is the next point along from the Opera House, and gives you a fantastic view of the Opera House in front of the bridge.  The path round is wide and when we walked it, full of runners and joggers and walkers from the nearby offices, out for their lunch time run.  We remembered wistfully when we used to do that from the Aviva building in Norwich (12:30 under the clock – remember Tim, Jeff, Roger?), but without the same views.  Riverside, Norwich or Sydney Opera House for a run……no contest for me and Norwich would lose evry time!  Round the corner from Mrs Macquarie’s point is the Naval Dockyard.  For obvious reasons they wont let you walk round there; pity as there were a couple of interesting ships moored alongside, including the Australian Navy’s Helicopter Carrier and a frigate bristling with weaponry. 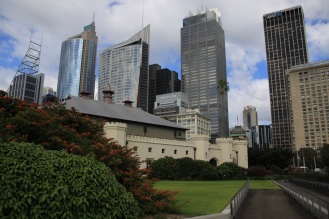 As well as Hyde Park, Sydney is blessed with a beautiful Botanic Garden which starts opposite Hyde Park and leads down to the Opera House.  Again, beautifully planted and landscaped it is surrounded on one side by tall office blocks.  On the other side is St Mary’s Catholic Cathedral and the Art Gallery, both worth a visit. 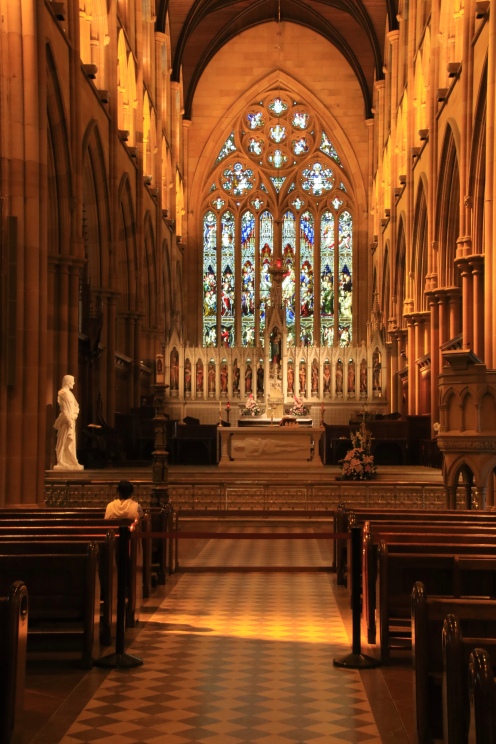 Finally on this whistle stop tour of Sydney’s highlights is a ferry ride away, to Darling Harbour and the Maritime Museum.  Using up the remaining balance on our Opal cards we took a short ferry ride and disembarked at Pyrmont Quay and a short walk to the Maritime Museum.  There are two parts to this site, the museum building which is free to enter, and two waterborne exhibits, a Destroyer, HMAS Vampire and a recently de-commissioned submarine (1999) HMAS Onslow.  Each has a story to tell though neither saw active service.

The Maritime Museum is a fascinating place in which to re-live Australia’s past maritime traditions and includes the boat that broke the World Water Speed record in 1987, driven by Ken Warby, “Blackmores First Lady” the yacht that Kay Cottee became the first woman to circumnavigate the globe solo, without stopping, without assistance, by way of both hemispheres and the five southernmost capes. On 5 June 1988, after 189 days at sea, Cottee returned victorious: the first woman to achieve this feat (and the fastest woman around the world generally). Other exhibits show how the indigenous people used their skills as boat builders to make small craft, and how the first settlers arrived in Australia by boat. 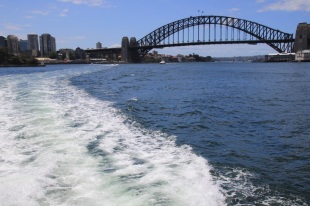 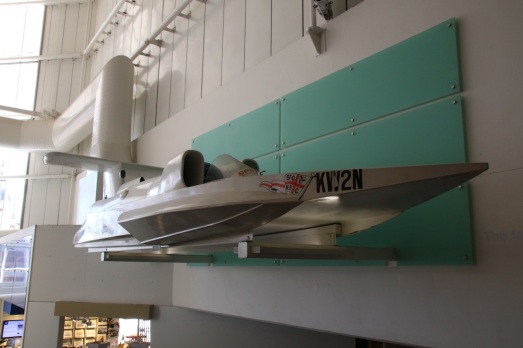 It is interesting to contrast Sydney and Brisbane.  Where Brisbane is less frenetic and appears more cultured, Sydney is more up front and brash.  The people are as helpful and friendly as elsewhere we have been.  We have enjoyed trying new cuisine, having Vietnamese food for the first time.  Very nice.  It is a very expensive city to live and work and quite crowded.  I did read somewhere that Sydney has a population of close to 8 million people, which when you consider that the population of Australia is only around 25 million, that shows how busy a place it is.  Like many cities, it is a great place to visit but also nice to leave.  I would like to come back but Lyn would not!

Last shot of us in Sydney