It’s Saturday morning and our first day in the Blue Mountains and finally our weather luck has run out. As we awoke and drew the roller blinds back (a yucky fawny brown colour to add to the misery!) we saw………fog. Yes, after the journey up yesterday in lovely sunny weather, the cloud has come down heavily, it is raining hard and the visibility is less than 100m. Yes I know Storm Doris has battered the UK and many have lost fence panels and roof tiles, but this is the first cold day for us in weeks and boy are we feeling it! 15 Degrees Centigrade!! Brrrrr.   On went the Gas Fire, and we huddled round it having breakfast and tried to plan our time here. Question is, how do you see the sights if you can’t see the sights, and where you are going? Answer? Go find a coffee shop to work it all out.

Leura is blessed with a few coffee shops, none of which looked that inspiring, so we took ourselves off to the next town, Katoomba. With our cottage having no wi-fi or internet access at all, the first criteria for a coffee shop is free internet access, so we can get all the blogs published and catch up on our e-mails and other things. We settled on a place called the Hatters Tea Room, strangely next door to a hat shop. It looked okay and had a fair few people inside which is always a good sign, so in we went.

We made our coffees last over an hour whilst we caught up on civilisation and planned what to do for the rest of the day and the next few days. The weather forecast at that point was rubbish, rain and cloud for 5 days, so that did not fill us with joy and delight. Following coffee, a very slow drive to find the Tourist Information Office at Echo Point -less than a mile from the town centre but with the fog it could have been in Aukland – and we eventually identified what we wanted to try and see and do if the weather ever relented.

Echo Point is normally a tourist magnate and Katoomba’s main attraction, and there were a few waifs and strays hanging around who had come in on tour busses from Sydney, but you could not see the viewing area from the car park (about 50m) so they had no chance of seeing anything else and went away disappointed.We picked our way carefully back to the cottage to wait for the rain to stop and the fog to lift.

Mid afternoon came and the rain turned to a fine drizzle so it was on with the rain jackets and a brisk walk into Leura for a look round. As with many small Australian towns it has one main street, Leura Mall, a railway station a supermarket and loads of little shops selling anything from soap to antique teapots. Coffee shops a plenty so choosing one for an afternoon shelter from the rain was not difficult. We got this one wrong. The view over the valley would have been stunning if you could see, but the coffee was bitter, nasty and foul. So much so that Lyn did not drink hers and “gave feedback” about it when we went to pay. Outcome? We got them for free. Mind you they were very bitter and nasty coffees……the people were fine!

The rain theme continued on Sunday but the cloud was much higher when it was back to our Internet café.  By lunchtime the sun was out, so we took a walk down to Echo Point viewing area again to see what it actually looked like. Wow! The place was crammed with tourists, many with that scourge of 21st century life, the bloody Selfie Stick. It was supposed to be a quiet day.

A panoramic view of the Blue Mountains from Echo Point 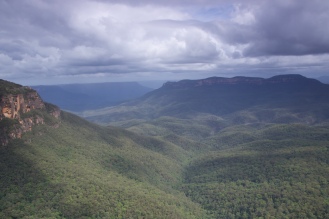 Clockwise from top left:  Two shots of  the Three Sisters; Valley shot; Us in the gloom; Valley view.

Hoards, many with Selfie sticks on the upper viewpoint at Echo Point.

RANT ALERT – SELFIE STICKS: What is it with people who insist on posing with these things whilst staring into the cameras on their ‘phones. They get in the way, take up so much room and bash you on the head when they lower them after taking the 50th picture of themselves. I watched one person with one of these things pose several times like a supermodel! Vain or what! I HATE THEM!  RANT OVER

Back to reality.  The views were stunning.  From the viewpoint you could see right across the valley and with the Three Sisters rock formation close on the left hand side with cloud remnants swirling around the vertical stacks it was a wonderful view. Several hundred other people falling off the tour busses thought so too and the path down to the lower viewpoint was packed with visitors, many with those selfie sticks.

There is inevitably a legend connected with the naming of the Three Sisters. The legend speaks of three sisters, Meehni, Wimlah and Gunnedoo who lived in the Jamison Valley as members of the Katoomba tribe. They fell in love with three men from the neighbouring Nepean tribe, but marriage was forbidden by tribal law. The brothers were not happy to accept this law and so decided to use force to capture the three sisters. A major tribal battle ensued, and the sisters were turned to stone by an elder to protect them, but he was killed in the fighting and no one else could turn them back. This legend is claimed to be an Indigenous Australian Dreamtime legend.  Far more likely is the formation over time by erosion from wind, rain and rivers, causing the cliffs surrounding the Jamison Valley to be slowly broken up.

Later we walked from Leura down to Gordon Falls.  The views were awesome, but Gordon Falls was more a dribble because of the lack of rain over the summer.  There was a cliff walk which we followed.  If anyone has been to Madeira this walk was reminiscent of the Levada Walks with a narrow path, a cliff on one side and a 300ft drop on the other.  The cliff walk ended at Leura Falls which was a lovely end to a great walk.  The views along the cliff were stunning, the slightly heavy low clouds providing a great view with more character and atmosphere. 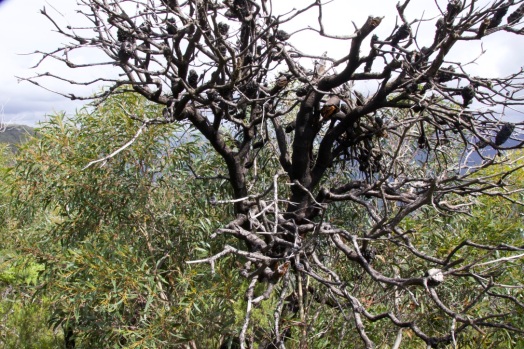 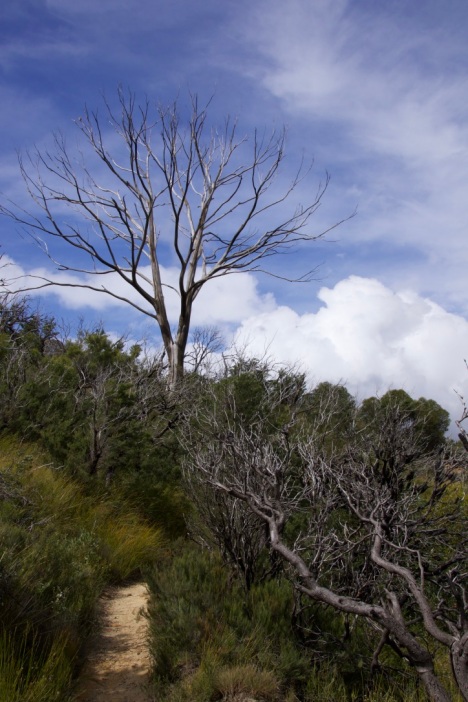 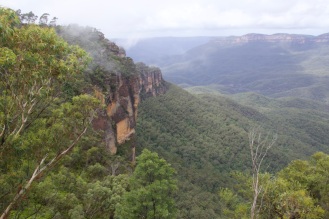 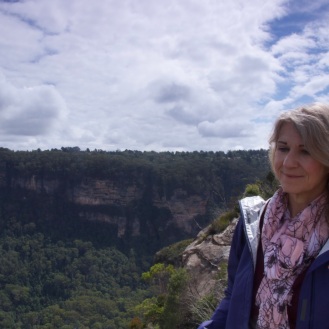 The next two days were much the same, rain in the morning so coffee somewhere with Internet then an afternoon out.  One afternoon we walked from our cottage to Leura Park.  We thought this was a lovely manicured park with colourful borders, maybe the odd sculpture or piece of artwork with a cafe maybe.  Not a bit.  Leura Park was a forest in the middle of the village which split it in two.  Still it had one path which we followed out of curiosity.  We ended up at Leura Cascades, a smaller version of the falls we visited the previous day.  The sun shone for most of this walk and it was good to get out without the car and see more of the local area.

Our other trip out was to a nearby village, Wentworth Falls.  The village takes its name from the waterfall of the same name.  Once again the weather was marginal and heavy rain was in the area.  We followed the Charles Darwin walk, named after the great man himself who walked this way as part of the HMS Beagle mission in 1836.  It was a lovely walk down and slightly strange to think that we were walking in the footsteps of Darwin, although at that time he was still 30 years away from writing that book.  It was very wet underfoot thanks to the heavy rain showers over the last few days but the views from Fletchers Look out and the path across the falls made it all worth while.  The walk back saw the heavens open again and we got drenched. 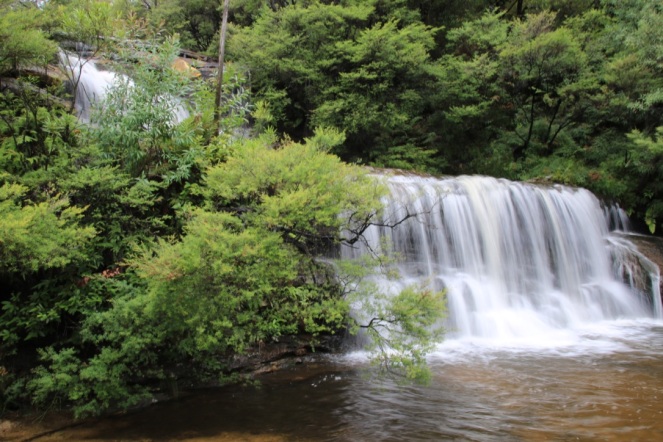 Wentworth Falls on a wet day 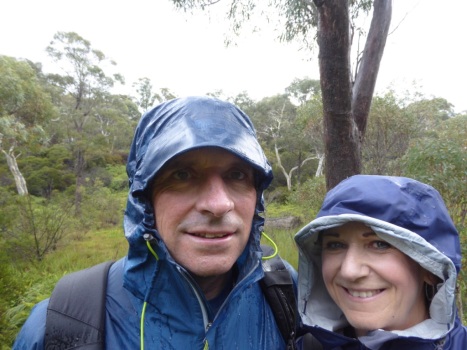 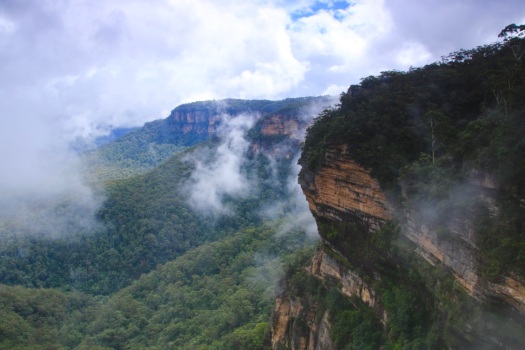 Left:  Us in the rain close to Wentworth Falls: View out from the falls

As you may have gathered by now, Lyn loves Libraries, even the pokey little ones you often find in the UK, but especially those that do something a bit different.  The local Library in Katoomba is one example.  They had two exhibitions showing.  The first was a natural history of the Blue Mountains going way back to when fossils were living creatures.  We also learned that the Blue Mountains got its name from the blue haze which can be seen when the sun shines.  The scientific explanation is something called the Rayleigh effect.  This effect causes rays of light which impinge on small particles to be scattered in various directions.  Since the atmosphere is always laden with small particles of dust and vapour, which in the Blue Mountains also includes oil from the thousands of Eucalypt trees that grow in this area, to someone looking at the distant mountains lit by sunlight the mountains will appear blue.  Hence the Blue Mountains.  Sadly this effect was barely visible on the days we were there, more like grey.

The other exhibition featured not local artists but one by a German whose name escapes me. His specialisation is what he called “Installation Art”  What he did was take iconic buildings or objects, wrap them in paper and photograph them. You may remember him he made the papers a few years ago.  Pictures included the Reichstag wrapped in paper and string and another building……………. As you can see this had a real impression on us….NOT.  What a waste of A$5 each.  Why oh why do they not have exhibitions of work by local artists, not this tosh!

Due to the weather we only managed to explore a very small part of the Blue Mountains.  What we realised early on is that many of the south side villages sit on top of a long tall cliff edge and to stand on the side overlooking the valley below it seemed like we were looking for the sea and sand below whereas all there is are vast forests of Eucalypt and other trees.

Next stop, the capital city, Canberra.