One of the reasons we came to Melbourne was to see the city and enjoy what it has to offer.       We also have friends and family here so this extended visit was a great chance to catch up with them and spend time sharing their lives in Oz.  Lyn’s cousin Joanne suggested attending the Moomba Festival together and saw it as a great opportunity to spend time with her,  husband Craig and 4 year old son Oscar.  They came to Melbourne just over two years ago and now regard it as home.

As we have eluded to in the past, the Aussies love a party and local festivals offer a good chance to enjoy a party and meet up with friends and family.  One such Festival in Melbourne is Moomba which is held over 4 days of the second weekend in March  culminating in the celebration of Labour Day, which is a public holiday in Australia.  Moomba is centred on the Yarra River and its banks around the centre of the city.

The name Moomba reportedly has a number of meanings.  The organisers prefer “lets get together and have fun” but other, more earthy derivations suggest it means “up your bum” in many local Aboriginal languages. It comes from an amalgam of two Aboriginal words “Moom”, meaning bottom and “ba” meaning up. Similar words used in different Aboriginal languages mean “show”, “making a noise”, “thunder” or “dark”, so the origins and derivations remains totally ambiguous. I’ll leave you to chose your own derivation.

We started our visit  on the north  river bank,  walking through what are normally the gardens, but for the festival, has been transformed into a fairground with vomit enducing aerial rides, fairground games, burger stalls and a bandstand where live music was being performed  throughout each day and evening. We were only attending for a few hours but we did get to  watch a band playing whilst we ate lunch in the park.  The band were okay, playing a mix of country and blues music, performing a few old Willie Nelson numbers and other country stuff, but they murdered a Paul Simon song,  “Slip Slidin’ Away” which was truly awful! They did okay on a more bluesy Tom Waite track though which I enjoyed much more. 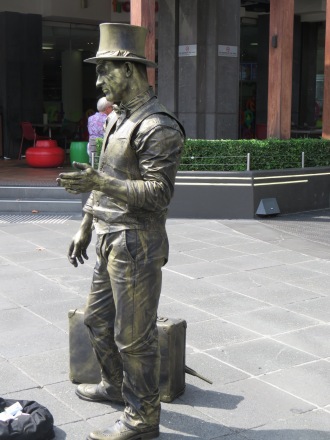 Moomba Scenes: Clockwise from top left: Street statue; Juggling performer; The guitarist from the band; Us at Moomba; Lyn and Craig.

On the river meanwhile, the Saturday waterborne event had started, Water ski-ing. It transpired that this is an international competition with competitors from around the world. As we continued our walk along the river bank we watched the start of the ski-slalom event.  It was fantastic watching these guys with their strength, timing and skill, cross and re-cross the wake as they slalom their way up and down the course.

Scenes from the Water Ski-slalom

Other events taking place on the river  over the weekend included the Annual Birdman Competition where competitors strap home made wings to their arms and launch themselves off a platform with the hope of propelling themselves across the river. Most end up diving, jumping or belly-flopping into the water! Monday is the culmination  of the Festival with a waterborne carnival procession. Each evenings celebrations end in that traditional Australian event, a massive firework display.

Later on,  while Oscar played on some kiddies attractions supervised by Jo and Craig, Lyn and I visited a Book Fair in the atrium of the Australian Centre for the Moving Image (ACMI) for a browse and lo and behold, tucked away in one corner was a stall selling old vinyl records.  We were in seventh heaven.  Chatting to the owner, we found out  he knew Norwich well and he told us he helped promote some local bands from the 70’s and 80’s there.  He even supplied some local independent record stores including my old favourite, Andy’s Records.  When I told him it was now a shop selling Jeans he was very disappointed.  Sometimes you realise it can be a very small world.

Close to where we are in Truganina is the RAAF base at Williams Point Cook, which is home to the Royal Australian Air Force Museum.  Oscar is mad on aeroplanes so this was a great opportunity for a visit.  It tracked history of the RAAF from its inception in 1913 through both world wars and campaigns beyond including Malaya and Vietnam.  Exhibits include documents, artefacts and a good static aircraft display. It was very interesting to compare and contrast the development of the RAAF with the Royal Air Force in UK.  There are many similarities but some differences, especially in aircraft and equipment.

Joanne and Craig live in Sunbury, a town about 40 mins north west of Melbourne.  It is delightful town, spacious and surrounded by natural parkland and bush.  There is a large out of town shopping area as you drive in but the town centre has coffee shops galore and a quiet charm.  It has a notable sporting claim to fame in that it markets itself as the birthplace of the Ashes urn legend.  Those who don’t follow cricket will no doubt be thinking, “what is he on about?” Please read on, I will explain.  In 1882 Australia defeated England in a test match in England for the first time.  Such was the dismay amongst the English that the day following this defeat a mock obituary appeared in the UK Sporting Times which read: “In affectionate remembrance of English Cricket which died at The Oval on 29 August 1882. Deeply lamented by a large circle of sorrowing friends and acquaintances. RIP. NB. The body will be cremated and the ashes taken to Australia.”  It is said that when England came to Australia later that year the captain was presented with an urn by some ladies of Sunbury which contained the “Ashes of Australian Cricket.” Since then Sunbury has regarded itself as the creators of that famous urn.  Others may disagree! 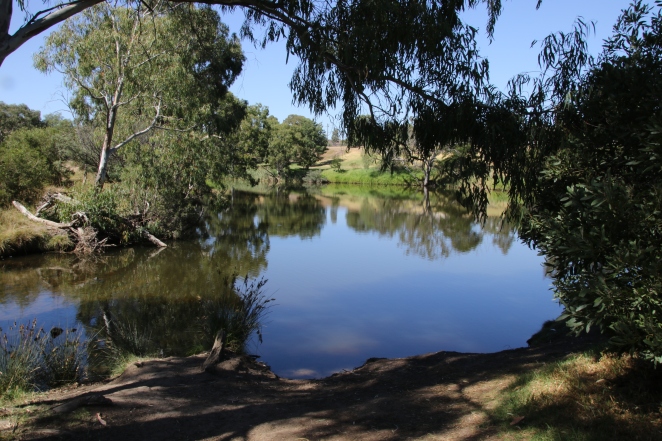 Scenes from around Sunbury

We have also been fortunate to meet with friends who came to Melbourne more recently, last October from Wymondham in Norfolk. They live in the south east coastal suburb of Melbourne called Chelsea.

Nick and Jenna gave us a huge amount of encouragement and advice whilst we were planning our trip, and, when we arrived in Australia, were in touch with hints and tips and support all the way on our journey.  It was great to meet up with them and see how well they have settled into their new lives in Oz.  Using their local knowledge, they have shown us round some lovely areas of Melbourne and the surrounding area that we would not have  seen without them as hosts and tour guides.

On Labour Day we shared a mini road trip down the coast to Sorrento and Portsea on the Mornington Peninsula. The coastline forms part of the Port Phillip Bay area which sits like a huge horseshoe shape to the south of Melbourne and our trip followed the eastern side of that shape.  The coastline towards  the peninsula tip is rugged in places but with many sandy beaches below.  Closer towards Chelsea and northwards the landscape flattens out and the beaches become wider and more easily accessible.  On a bright and sunny day we enjoyed lunch out in Sorrento and  walked to the cliff tops at Police Point with view points across to Queenscliffe, and Cheviot Bay with some stunning landscapes. 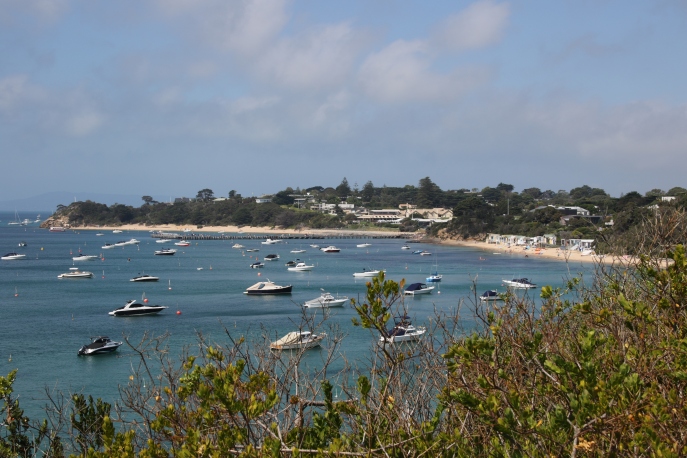 Historically, the park at Police Point was the site of the police barracks and the gatekeeper’s quarters of the Point Nepean Quarantine Station (1850-1970s) although in the early twentieth century the barracks were relocated and four additional Quarantine Station staff houses were built. More recently the site was used by the Department of Defence (until 1998) and currently the two older buildings on the site are unused, while the four staff houses are used for occasional respite accommodation. Other buildings on the point are in the process of restoration. 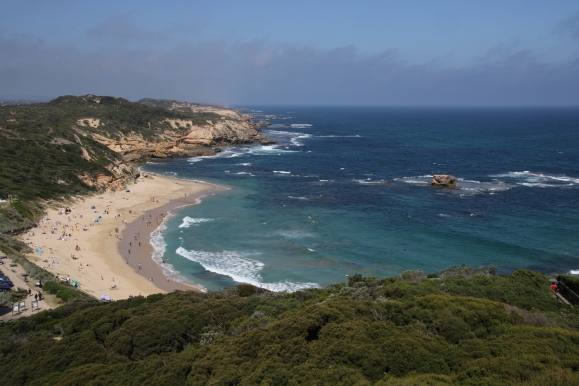 Clockwise from top left: Cheviot Bay; Can someone help me please, I need a drink!; Nick and Jenna; Chelsea Beach; Cheviot Bay – The other side.

It was always our intention to have an extended stay in Melbourne so we could meet up with family and friends. To take advantage of their local knowledge and to explore areas beyond the city has been really enjoyable.  To share special times with them and to experience a little of their lives in this amazing city they now call home has been heartwarming.

We have a few days left in Melbourne and plan to make the most of the remaining time.  There is still so much to see and do.