One thing Australian cities are not short of are parks and open green spaces. Melbourne is no exception, having no fewer than 11 parks or gardens within a mile of Flinders Street Railway Station.  They were part of the city planning all those years ago and most public administration buildings have a park or garden area where their staff can relax and enjoy the peace and quiet. These are all open to the public and we have enjoyed walking through the parks, relaxing in the gardens and sharing them with the locals. Also many of the museums are free to go in, and most provide guided tours. 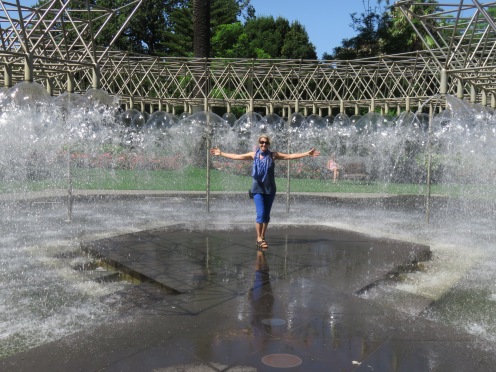 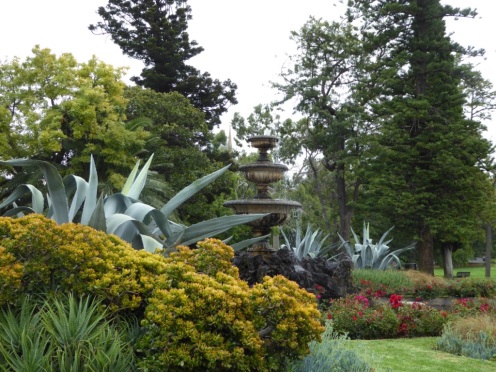 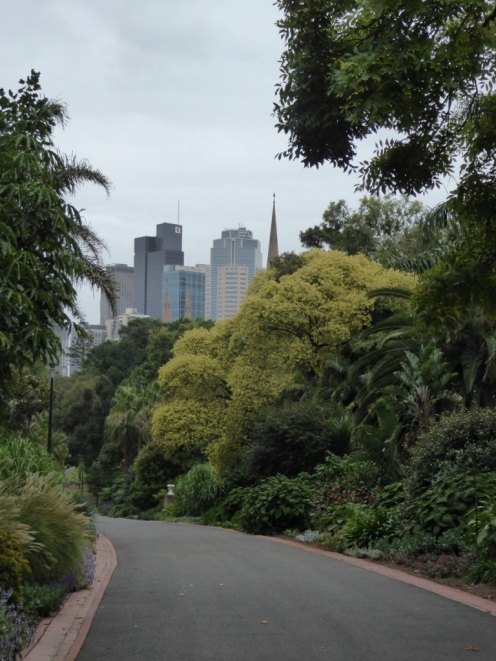 Scenes from the numerous parks in Melbourne

Earlier this week we were having our picnic lunch in the Treasury Gardens and we chanced upon a gathering by one of the Australian Trade Unions, the CFMEU.  They had organised a “presence” as one of their number described it, to try and influence a debate being held in the State Parliament around a proposal to close a logging and wood treatment plant at a town called Heysfield in the north of the state.  Closure would mean the loss of up to 10,000 jobs, so naturally they were quite agitated, though peaceful.  It was interesting talking to these guys about their work and conditions and gave us a reminder that Australia is no different to any other democracy  when it comes to government and politics and the decisions they take!  It was the quietest protest I had seen.  About 200 assembled outside the Treasury building for about 20 mins.  After which they took down their banners, walked 10 yards down some steps into the park, all sat down and enjoyed a picnic! One or two spoke to the assembled media but mostly they sat around under the trees and chatted amongst themselves enjoying the sunshine! 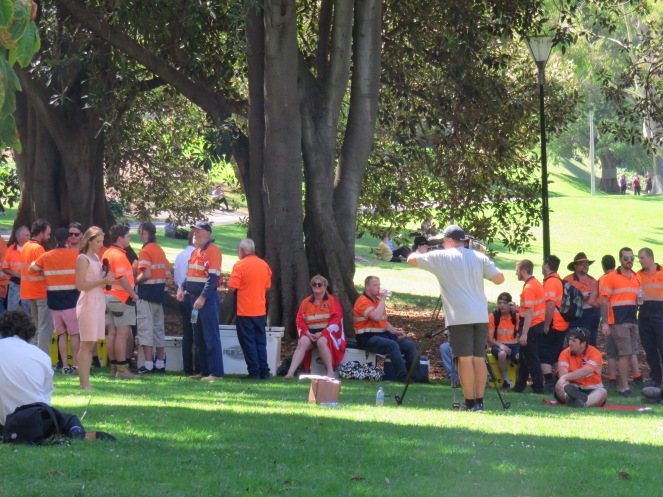 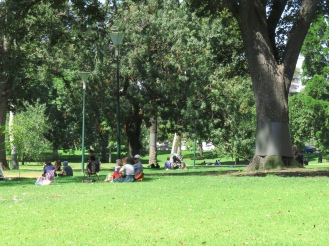 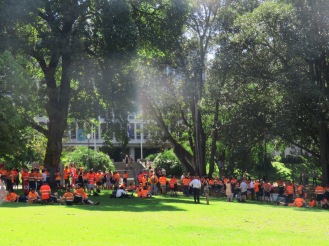 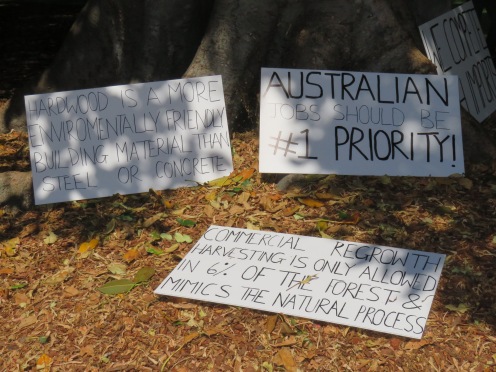 CFMEU relax in Treasury Park after their protest

After this interesting interlude we took advantage of one of a number of freebie tours on offer in this city.  This one at the Treasury Building was all about the Gold Rush and its impact on Melbourne.  The Treasury building is one of the finest of that era in Melbourne and was initially built to house the gold flooding into the city from the goldfields nearby.  Massive underground vaults stored the gold but they now form part of a fascinating exhibition illustrating the gold rush and its impact on Melbourne and the surrounding areas. 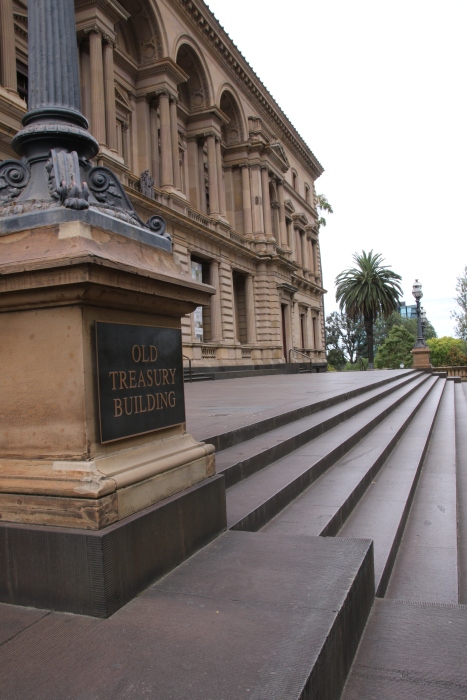 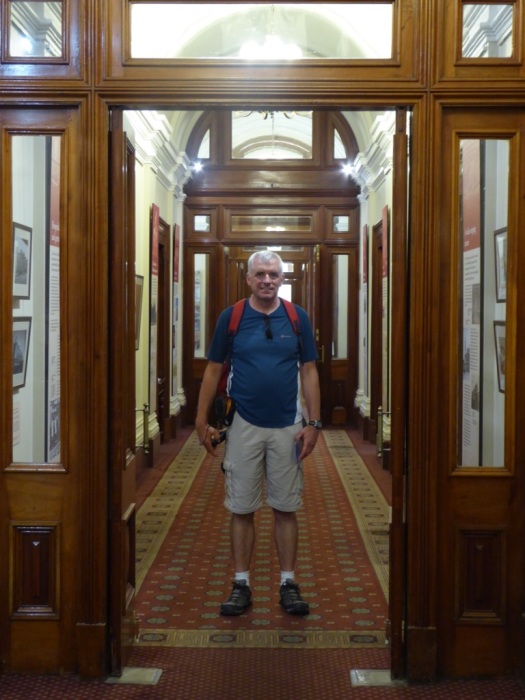 Views inside and outside the Old treasury Building.

About 10 minutes walk away is Carlton Gardens.  We first visited these gardens on our city walk last week but thought them worthy of a return visit as we were there only very briefly the first time.  At the height of summer they must have looked amazing but as we are now into Autumn, many of the plants have finished flowering.  Nevertheless put together with the Royal Exhibition Building, another classic building originating out of the Gold Rush they are a beautiful sight.  Behind the Exhibition Building is the Melbourne Museum, a contrastingly modern design but no less spectacular for all that.

To the south east of the city centre is Melbourne Park, a large area which is home to the Rod Laver Arena and the Margaret Court Arena, which of course host the first Tennis Grand Slam event of each year the Australian Open.  There are also two other  stadia on this site, but over the road is the home of the mighty Melbourne Cricket Ground, the MCG or to locals “the G”.

Inside the Melbourne Cricket Ground (MCG)

There are many famous stadia throughout the world, Old Trafford, Lords, Eden Gardens Calcutta, but high on the list of iconic venues must be the MCG.  It is where all cricketers want to perform well regardless of their nationality.  It is also home to four AFL (Aussie Rules Football) teams and hosts Rugby Union, Soccer and the odd gig.  I could not wait to go on a tour round.  (I had to pay for this one though!) The first MCG ground was built in 1853 on the current site and it has been modernised and stands built up over the years until today when the current stadium will hold 101,000 seated spectators with another 13,0000 standing.  The record crowd for any event was an appearance by the American evangelist Billy Graham who attracted 135,000.  When I visited, the ground was being prepared for the opening “footy” (Note: Aussie Rules Football is known as “footy” to the locals) game of the season on 23 March.  To accomplish this the entire cricket wicket is lifted out  and replaced by another grass square to enable the winter games to take place.  It is a huge task as they have to close the road which runs to the side of the ground to move the entire square to its winter recovery nursery at the rear of ground. We were allowed onto the outer ring of the pitch but were not allowed to tread on the grass.  The photographs cannot give any indication of the scale of this place but it is huge.  As we toured round the views got better, but I would imagine the players look smaller and smaller.  You would need binoculars or a good telescope if you were right at the back.  As you can see I was very taken with this place.  If we come to Melbourne again I will go and see a cricket match here, the atmosphere with 100,000 people must be amazing.

Clockwise from top left: View from inside the stand; The MCG Banner outside: Views of the playing surface 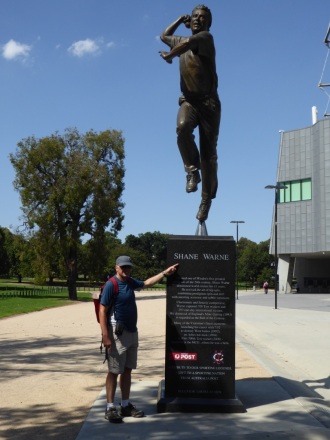 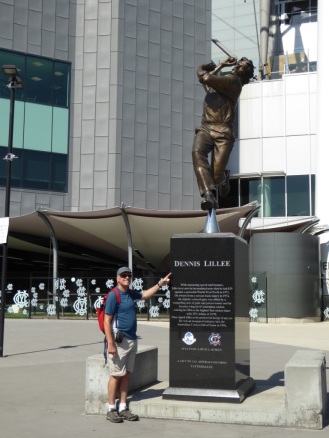 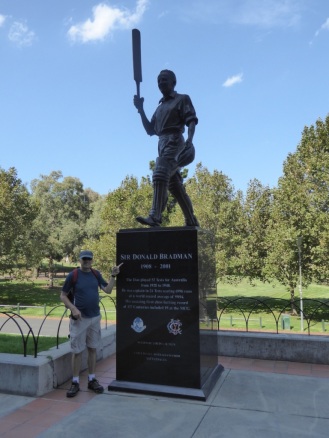 Statues of L-R:  Shane Warne; Dennis Lillie; Sir Donald Bradman all of whom graced the MCG during their careers.

In Federation Square there are a number of free museums and items of interest.  The buildings themselves are of a modern design but painted in a sort of camouflage brown and green to blend in with the background buildings.  Close up it looks weird, but viewed from a distance it works.  Within one of these odd looking structures is the Australian Centre for the Moving Image (ACMI), a celebration of cinema and TV  from an Australian perspective.  It was a fascinating exhibition and museum and tracked the development of cinema from its origins in France and how it arrived and developed in Australia.  The first TV broadcast in Australia was not until 1956 when Melbourne hosted the Olympic Games, which were the first to be properly televised.  So late was TV into Australia that Darwin did not get regular TV broadcasts until 1971!  One exhibit Lyn was particularly taken with was a  section on Children’s TV Aussie style.  Her favourite was Skippy the Bush Kangaroo and yes, they were proudly showing clips!  She walked round the rest of the exhibits quietly singing the theme tune!  (Sad isn’t it?)  “Neighbours” also featured and there was a fascinating area on the development and rise of Gaming and what the future holds with Virtual Reality. 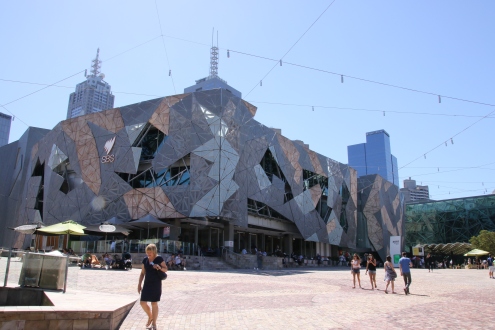 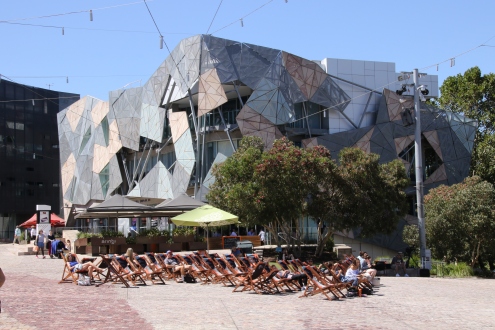 Federation Square and those exhibition  buildings 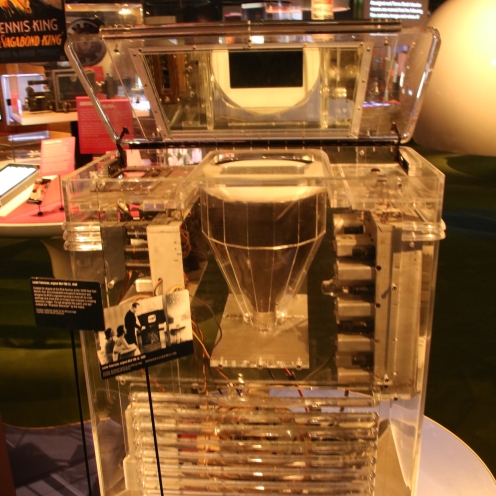 Clockwise from top left:  Lyn re-connects with Skippy the Bush Kangaroo; Us on TV; Lyn marvels at the wonder of TV:  An American TV built into a clear case to illustrate no trickery!

Another free exhibition was at the National Gallery of Victoria where among the  exhibits were some landscapes painted by a few familiar names.  That and the photographic exhibition by Australian photographer Bill Henson made for an enjoyable couple of hours. 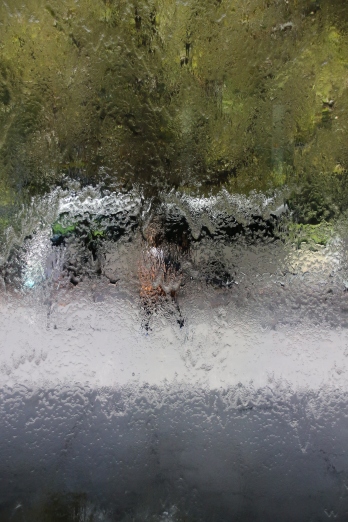 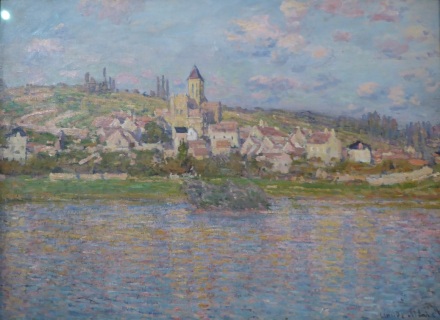 The National Gallery of Victoria: Clockwise from top left:  The front window is an artwork with water flowing down its entire length: Cezanne; Monet; Sargeant; Picasso

Finally, no visit to Melbourne would be complete without a tour of the Ned Kelly exhibition in the National Library.  The library itself has been constructed piecemeal over many years and has several styles of construction but only one stone, blue sandstone.

Left: Reading room in the National Library; Us on a balcony at the library

For some, Ned Kelly was a local hero, a sort of Robin Hood character who had strong values.  On one occasion, when robbing a bank he set fire to the vault where many mortgage deeds were stored, thinking that if there were no proof, those people would be free of their commitment to the bank.  Many were, but for some, copies of their documents were held in Sydney so the commitment remained.  However to many he was an outlaw and a murderer, having killed 3 policemen during his short life.  A proclamation issued in 1878 declared him outside the law (an Outlaw) which then entitled the police to shoot on sight to apprehend this man.   The exhibition featured his famous armour, various letters and early photographs of the gang as they terrorised the northern part of Victoria. One particular opus, known as the Jerilderie  Letter written by another member of his gang but dictated by Kelly, set out over 56 pages  a detailed written justification of his actions. He was eventually trapped by police and arrested, tried and sentenced to death.  He was hanged in November 1880 at the age of 26. 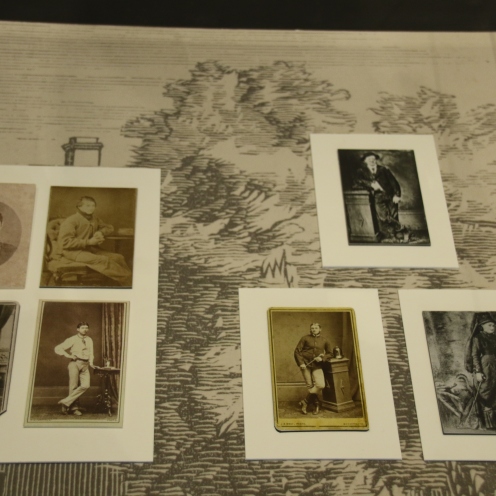 Tomorrow (Sunday) we leave Melbourne for the last leg of our trip along the Great Ocean Road.  This is the longest time we have spent in any one place in Australia and it has been great to see the sights and re-connect with family and friends.  This city has got under our skin and  is definitely a place we want to return to.