The Great Ocean Road.  The romance of the name  alone  conjures up images of sweeping twisty roads cut into steep cliff faces on one side with long sheer drops on the other if you miss a bend. This is our last road trip before returning home and a fitting way to end.

The Great Ocean Road  was first planned towards the end of the first world war, when it was suggested that the State War Council (Victoria) provide funds for returning soldiers to work on roads in sparsely populated areas in the Western District of the state. At the time of World War I, the rugged south-west coast of Victoria was accessible only by sea or rough bush track. Besides being dedicated as a memorial, it was also envisaged that the road would connect isolated settlements on the coast, and become a vital transport link for the timber industry and latterly tourism. The route starts in Torquay and follows the Surf Coast between Torquay and Cape Otway and the Shipwreck Coast further west of Cape Otway, with views of of Bass Strait and the Southern Ocean. The official Ocean Road ends at Allansford near, Warrnambool and is a total of 243km (151 miles) long.

Our route took in a drive through Geelong to get down to the coast and the start of the Great Ocean Road at Torquay.  Arriving here we looked for a coffee shop, after all it was 11am and Lyn needs her morning caffeine inject!

There is much to commend the very long (about 2 miles) Esplanade at Torquay where we eventually found a cafe. It is unlike any Esplanade at home due, thankfully, to the lack of amusement arcades tacky gift shops and fish and chip shops.  This had a long beach on one side and on the other, a few houses set into woodland, and a couple of cafes.  Our cafe, set back from the road provided us with some great views of the wide expansive beach and and people enjoying the warm sunny weather.  Right at the end of the Esplanade was the charming village centre and a massive Sunday Market, spread out on the grass between the beach and the road was doing a roaring trade. Sadly we did not have time to stop and peruse the market or the shops, there was nowhere to park and the place was rammed with people and parked cars on both sides of the road. 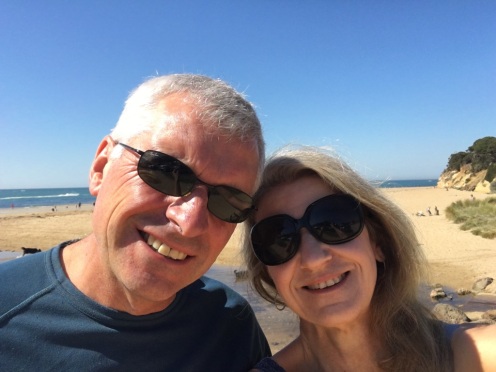 Back  on the open road  we began to climb, the road got slightly narrower and more twisty.  We passed on through Anglesey,  and Lorne, pausing here only for a short lunch stop. (Worth stopping to look around if you have more time). There are many viewpoints to stop and gaze, all with stories to tell of some significant occurrence from recent history.  A shipwreck at one point, another named after the man who first landed there or discovered it, if you stopped at all of them it would take a very long time to reach the end.  As well as the viewpoints there are  many deserted, quiet but accessible coves where you could have the beach to yourself should you choose.

Above:  Two of the quiet coves we passed en route to Apollo Bay 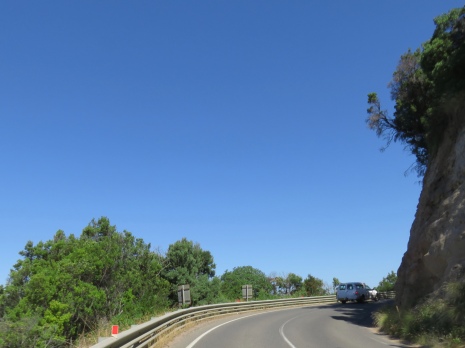 Our first night stop was in the romantically named Apollo Bay. After checking in to our motel, we went to explore.  It is a small village by Australian standards but well worth a visit. The beach is long, leading to a small harbour nestling in the shelter of the breakwater at the southern end by Bunbury Point.  The other side of the point was another long and deserted beach running away to the west and bordering the golf course.  The village has the usual run of shops, cafes and restaurants so it was a useful walk to find a place to eat that evening and for breakfast in the morning (our motel has no dining facilities). 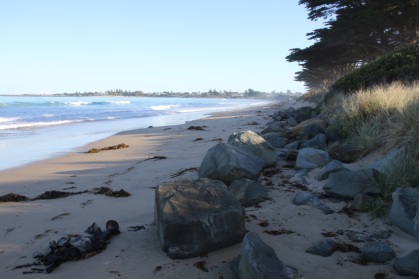 Up early for a run/walk, we decided to track back along the beach away from the village to be greeted by a stunning sunrise amid broken high cloud.  The  late sea mist that had settled on the scene the previous afternoon had disappeared to leave clear views across the bay and behind to the Otway Ranges mountains behind Apollo Bay.  This clear weather bode well for our day which although short in driving terms would hopefully cover so much in history and viewpoints. 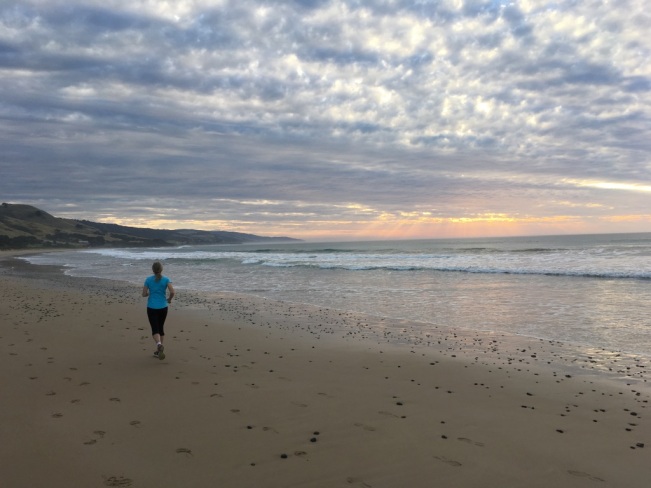 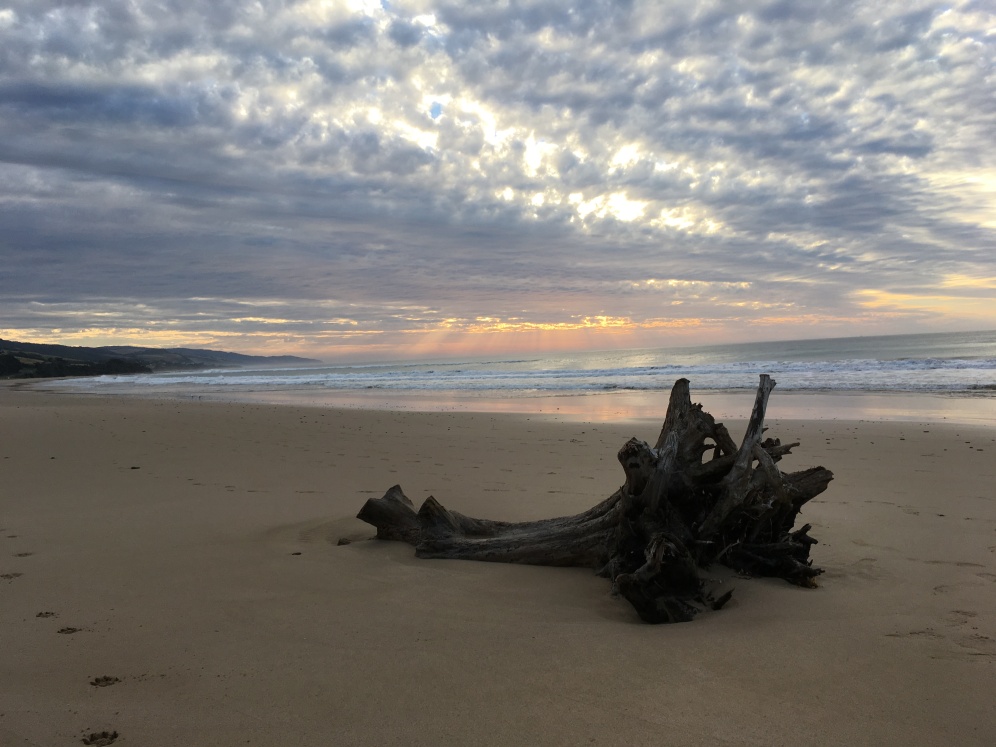 As we left Apollo Bay the road turns inland to cut across the top of Cape Otway into the Otway Ranges and there are some stunning views back to the village.  There is a road down to the Cape and to the Lighthouse (or lightstation as the Australians call them) and having previously read about the Cape, it was to be our first stop of the day.

The lighthouse sits at the tip of the Cape and perches on towering sea cliffs where the Bass Strait and the Southern Ocean collide. It is the oldest working lighthouse and most important lightstation in mainland Australia.  The Lighthouse was constructed in 1848 and it remained in service until it was decommissioned in 1994 and replaced by a smaller, solar powered light which sits in front of the original stone building.  The site is now a living museum and hosts other interesting exhibits including the Keepers cottages, a WW2 Radar bunker and an aboriginal site, which was present at the Cape long before the lighthouse arrived. It is a sobering thought, but for many thousands of 19th century migrants who spent months travelling to Australia by ship, Cape Otway was their first sight of land after leaving Europe. Also for a few, a place of disaster and shipwreck.  These people who lost their lives at the hands of the Cape weather are also remembered. 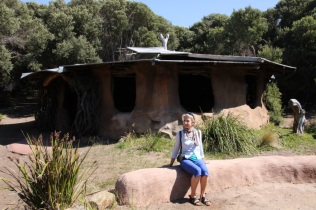 Leaving Cape Otway we rejoined the road towards our destination for the day, Port Campbell.  En-route is the one attraction for which  this route is best known, namely the Twelve Apostles.  These are stacks of limestone rock standing tall just off shoreline about 10 miles east of Port Campbell.  Originally joined to the land mass, erosion  by the wild elements over many centuries gradually eroded the soft limestone to form caves in the cliffs, which then became arches, which in turn collapsed; leaving rock stacks up to 50 metres high.  Continued erosion by the weather conditions in  the Southern Ocean means that there are only eight left, the others collapsing over time, the last in 2005.

As we turned into the car park, mid afternoon, we saw huge crowds of trippers pouring out  of coaches and cars, making their way down to the viewing area, and despite the glorious sunshine we decided that we did not want to share the experience with hoards of selfie-stick wielding visitors, all elbowing each other for space on the viewing platforms! As we both have a natural antipathy to the massed hoards, we rapidly legged it and made our way to Port Campbell, our base for the evening, planning to return the following morning when we hoped there would be fewer visitors. We were later told that the mornings are better at the Twelve Apostles, the busiest times are between 2pm and 6pm when the tourist coaches arrive.

What to say about Port Campbell.  Not a lot really.  If you ever do this road trip do not stay here!  There are many motels and places to stay but the choice of restaurants and cafes is limited.  The main street is about 200 metres long and has a general store, and a couple of cafes and restaurants and not a great deal else other than a police station. There is nothing but a rather unappealing bay and a few houses plus the roads in and out.

To add to our disappointment, the weather changed overnight in Port Campbell.  When we came to leave on the last leg of the Great Ocean Road, the lovely warm sunshine that we had enjoyed previously had disappeared, to be replaced by heavy grey low cloud, cold winds and heavy rain.  Even the helicopters the operate sight seeing flights from the Visitors Centre were grounded.  Mind you, it is the first rain we have seen since the Blue Mountains so we can’t complain. 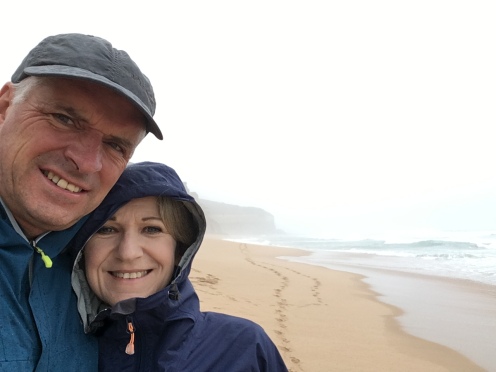 On the beach at Gibson Steps

So off back to The Twelve Apostles hoping the rain would abate and we could see the views.  First stop was the Gibson Steps .  The steps are accessible from the main visitors centre and must be done, because they are the only access to the beach near the stacks. They are steep but well worth the effort.  Once on the beach, if you were prepared to risk the tides you could walk along the beach round the cliffs at low tide to get a better view of the Apostles.  But be aware the tides ebb and flow quickly here so you could get trapped.  The visibility was poor as we made our way down to the beach, and did not improve much whilst we were there, so no sight of the rocks, but the rain did ease a little so we were able to get some pictures.  By the time we reached the viewing platforms for the Twelve Apostles the rain had stopped and we were able to get more pictures without being elbowed in the ribs or bashed on the head by some stick wielding maniac.

Twelve Apostles:  I know there are only eight, but why spoil all the fun?

From here there are a number of viewpoints worthy of stopping at but as we descended  towards Peterborough the terrain levelled out and became reminiscent of the Fens with wide open fields, farmland and not much else.  It is not worth stopping in Peterborough (no jokes please!) as it is three shops, 6 houses and no cafe. By this time it was raining hard again and we made our way carefully to our last stop at Warrambool and the official end of the Great Ocean Road and almost the end of our trip. 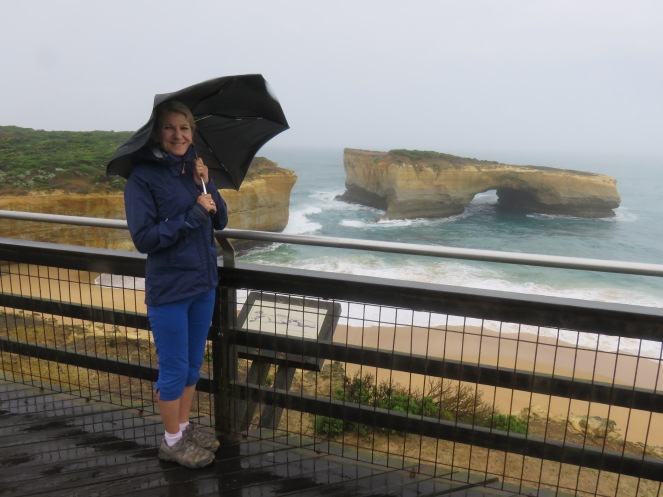 One of the viewpoints after the Twelve Apostles.  This is London Bridge.  It was attached to the cliff until 1994 when the bridge came crashing down.  No-one was injured but two people were marooned on what is now the island and had to be rescued.

Warrambool calls itself a city – but I think is really only a large town – it has a population of around 32,000 people and from what we have seen it looks a lovely place to be.  It has a bay frontage which, when the sun shines, I am sure is wonderful, but as it was blowing a howling gale in heavy rain the appeal is somewhat muted.

On our run this morning the rain had stopped and Warrnambool did look a lovely place to be.  Unfortunately we have an appointment at Melbourne Airport with Avis to drop our car off.  Yes, our trip is coming to an end but it is not over yet.