New Zealand is always full of surprises.  In Whangarei we had read of the Quarry Gardens and Quarry Arts Centre as places to visit.  These locations are close by, situated in adjacent old quarries, separated by a steep wooded walk.

At the Quarry Gardens is a delightful cafe where we went for our morning coffee recently.  They also have a range of delicious cakes, pastries and snacks.  Well you have to sample them don’t you?  We lingered long there as it was raining hard, nevertheless, the intention had been to view the garden, so armed with umbrellas we set off.  We had walked less than 50m when Lyn spotted a path off up a steep hillside which led to the Quarry Arts Centre.  So we followed it.  Thirty five minutes later we scrambled down a steep wooded path and a flight of steps into a clearing which was the old quarry.  This site had used some of the old quarry buildings and turned them into Artists workshops, and Exhibition Hall and the smallest cafe I have ever seen.  Room for three people inside and six sat outside on a patio. The Centre started as a co-operative of like minded folk about 20 years ago but is now professionally managed but all decisions are taken democratically and voted on collectively.

There is a new shop which sells the work of all the artists/sculptors in residence and this is staffed by the artists themselves on a voluntary roster basis.  On duty on the day we visited was Sid, a bearded older gentleman whose talent was wood turning.  He had produced some wonderful pieces for display and sale.  He was a lovely gent who told us of the history of the place and his own background as a teacher.  He grew up in Whangarei but had taught in London and had visited parts of the UK but was not familiar with Norwich or Norfolk.  Lyn took to him immediately and they sat outside on the bench whilst Sid played his mini Accordion and sang Scotland The Brave (not sure why he chose that song).

Lyn here: For those who know me, you will know I grew up without a father and didn’t meet Norman until after my mother died in 2007. Sadly Norman cannot be the father I always yearned for. Oh how I wish he could be like Sid; a gentleman, warm, gregarious, articulate, an artist and musician. What a wonderful man. How easy it was to sit with him and accompany him in his rendition of ‘Scotland The Brave’. What a treat!

We also met a younger lady who appeared to be their Admin/IT person.  She was originally from Stroud in Gloucestershire and had been in New Zealand for about 3 years.  She had a delightful little rescue dog called Robyn.  Poor Robyn was very timid and shy, a result of being abused as a puppy.

We lingered a while looking at some of the exhibits and sculptures before heading back to the gardens.  By the time we made it back the rain was even heavier so the walk round the garden was delayed for another day.

We visited the following day.  What a treat.  The skill these volunteers had shown in carving out a garden from the quarry.  Words can’t do it justice so I will let the pictures do the talking. 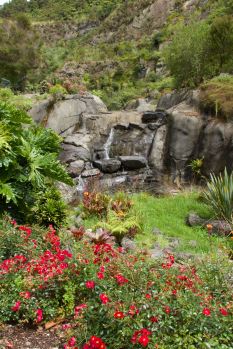 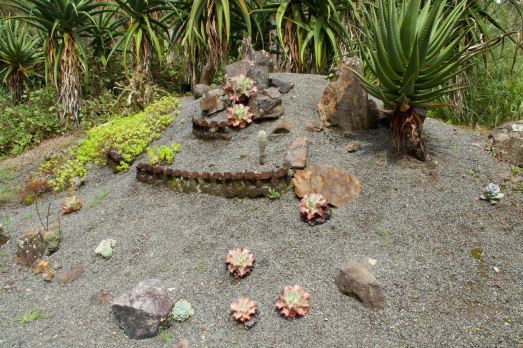 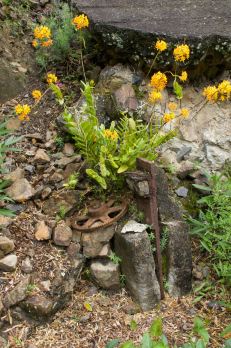 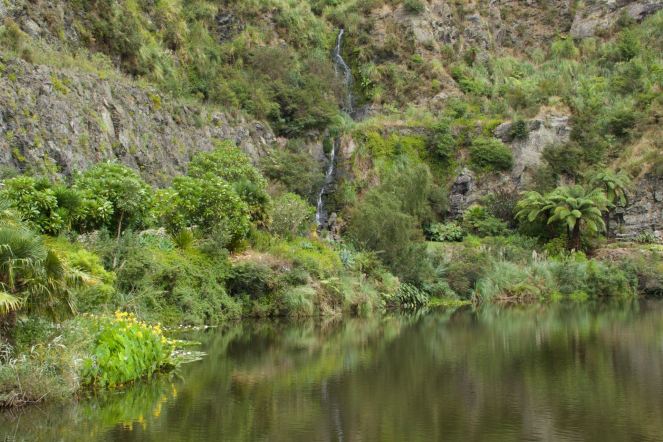 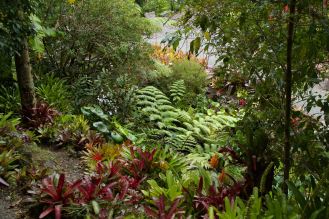 Shots of the Quarry Garden Whangarei

As our final salute to Whangarei we drove some 30 miles or so to Whangarei Heads for a beach and cliff walk.  It was a lovely walk over grassy cliff paths and the views were brilliant in the warm sunshine.  We passed by Busby Head Gun emplacement – put there to protect NZ from marauding Japanese raiders during the second world war.  It must have been a tough gig, as the gun only fired three practice rounds from when it was built in 1942, until the end of the war!  We walked on to Busby Head, then down on to Smugglers Bay, a delightful little bay that was deserted, which was odd as it is high summer here andI for one expected crowds of people. 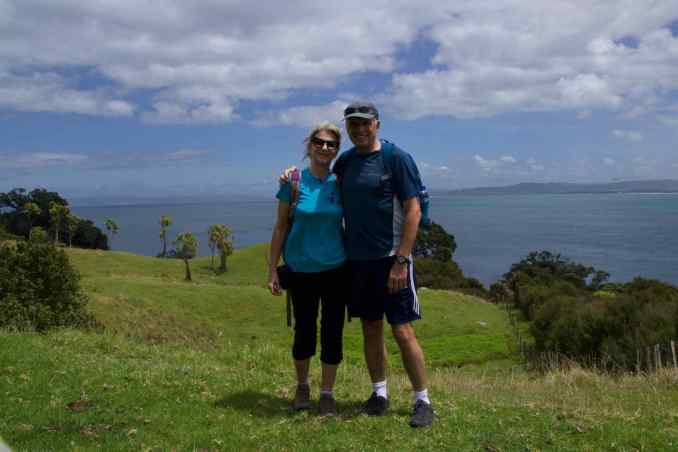 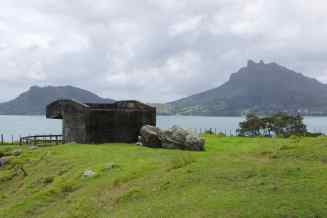 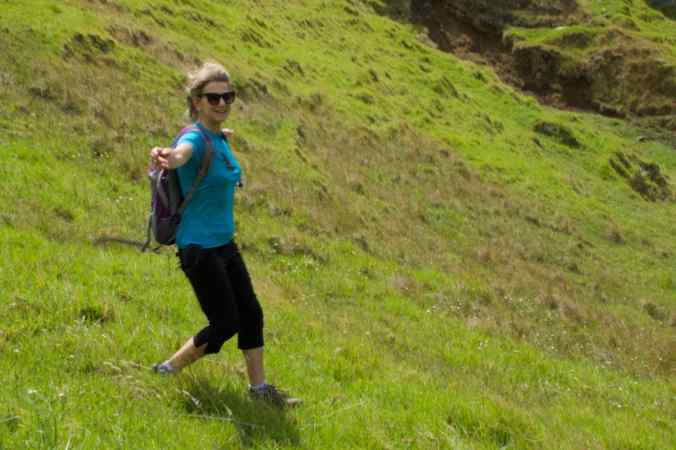 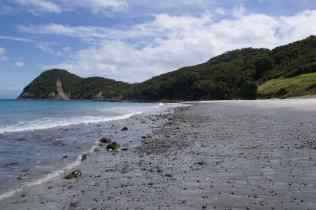 Now the Treaty bit.  First some geography and a smattering of history about New Zealand.  Please bear with me……

New Zealand lies in the South Pacific about 1000 miles east of Australia and 6200 miles from West Coast America (San Fransisco).  There are two large islands and a number of small ones with a land mass comparable to Japan and the British Isles.  The population is about 4.5 million of which two thirds live in North Island.  Auckland is the most populous city and is home to the largest Polynesian community in the world.

It is thought that the first explorer to discover New Zealand  was a Polynesian named Kupe in around 950AD, though there is some scientific analysis which suggests that the islands were settled up to 2000 years ago but these early visitors did not survive long.  Kupe returned to his home land of Hawaiki. Bear in mind that at this time navigation was by the stars, using bird migration patterns and wind and sea currents and was a very haphazard undertaking is it is something of a miracle that Kupe found this land at all.

Some 400 years later, using directions left by Kupe a fleet of canoes left Hawaiki to find this new land, Aotearoa “land of the long white cloud.”   The explanation for this is possibly that as the canoe fleet approached from the sea all they saw was a long white cloud shrouding the islands, hence “the land of the long white cloud”.  The Polynesians sailed very large canoes with an outrigger similar to a catamaran and their vessels would have been laden with plants and animals in order to survive on this new land.  Many were driven out of their homeland by starvation or intertribal warfare and were escaping to a new life. Again it is barely believable that 400 years after Kupe, these navigators could find their way with minimum artificial help.

Aotearoa was largely ignored until Tasman in the 1640’s and later Cook in the 1760’s came visiting.  Cook claimed what was now New Zealand as a British colony in 1770 and slowly it was colonised.

As is with most colonisation The Maori and the new interlopers had their fair share of disputes. Even inter tribal strife among the Maori was not uncommon. Harsh conditions for the Whaling and Sealing fleets , friction between Christian missionaries and Maori and pressure from the Colonising Society led by Edward Gibbons led to the British authorities under the auspices of the new Queen, Victoria, to pursue a treaty with the Maori to establish Sovereignty.  And so it was on 6 Feb 1835 that this treaty was signed at Waitangi.  Today, this date is marked as Waitangi Day and commemorated at the Treaty Grounds. 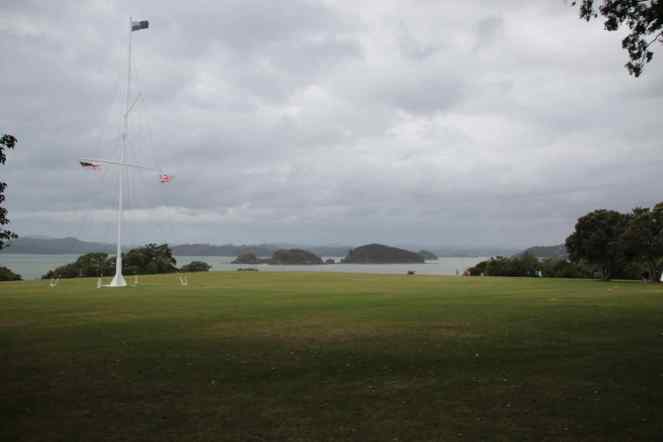 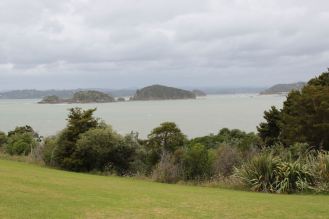 Views of the Bay of Islands form the Treaty Grounds.  The flag pole marks the exact spot where the Waitangi Treaty was signed.

The Treaty Grounds were actually the grounds where James Busby, the official British Resident at the time had his home. It was shipped over from Australia as a flat pack kit in 1834 and forms part of the Grounds tour. Interestingly the Treaty House was a very modest dwelling when first constructed, just four rooms. It was subsequently extended over the years.  The Treaty Grounds are a large open expanse looking out into the Bay of Islands and it is not difficult to see why Busby chose to build his house here.

The Te Kōngahu Museum of Waitangi, part of the site, is a modern and comprehensive showcase of the role of the treaty in the past, present and future of Aotearoa New Zealand. It provides a warts-and-all look at the early interactions between Māori and Europeans, the events leading up to the treaty’s signing, the long litany of treaty breaches by the Crown, the wars and land confiscations that followed, and the protest movement that led to the current process of redress for historic injustices. This stems from the translation of the document from English into a number of native languages.  This was done literally overnight by Edward Gibbons and his son because the Maori chiefs attending the signing could not read English and some of the statements “lost or changed meaning”  in translation.

The replica of the waka taua (Maori War Canoe), exhibit is very impressive.  About 35m long and weighing 6 tons it takes a crew of 80 rowers to power this thing across the water. The museum exhibition demonstrates how this thing was carved from gigantic Kouri Trees and how the originals were built. In 1983 Princess Diana was the first female to be carried in this canoe when she asked for a trip out in it whilst visiting the grounds with Prince Charles! Maybe she saw something even then that we did not! 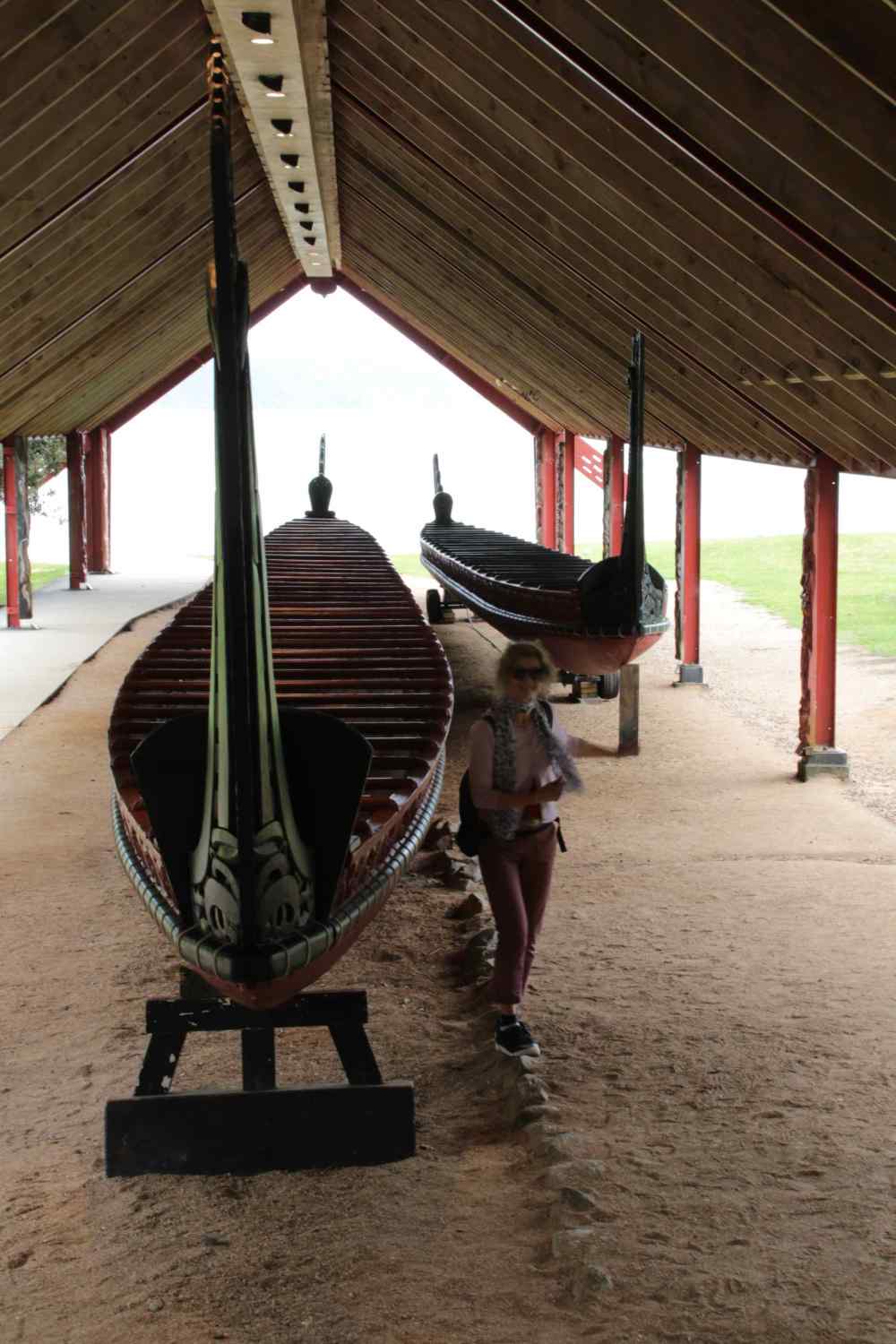 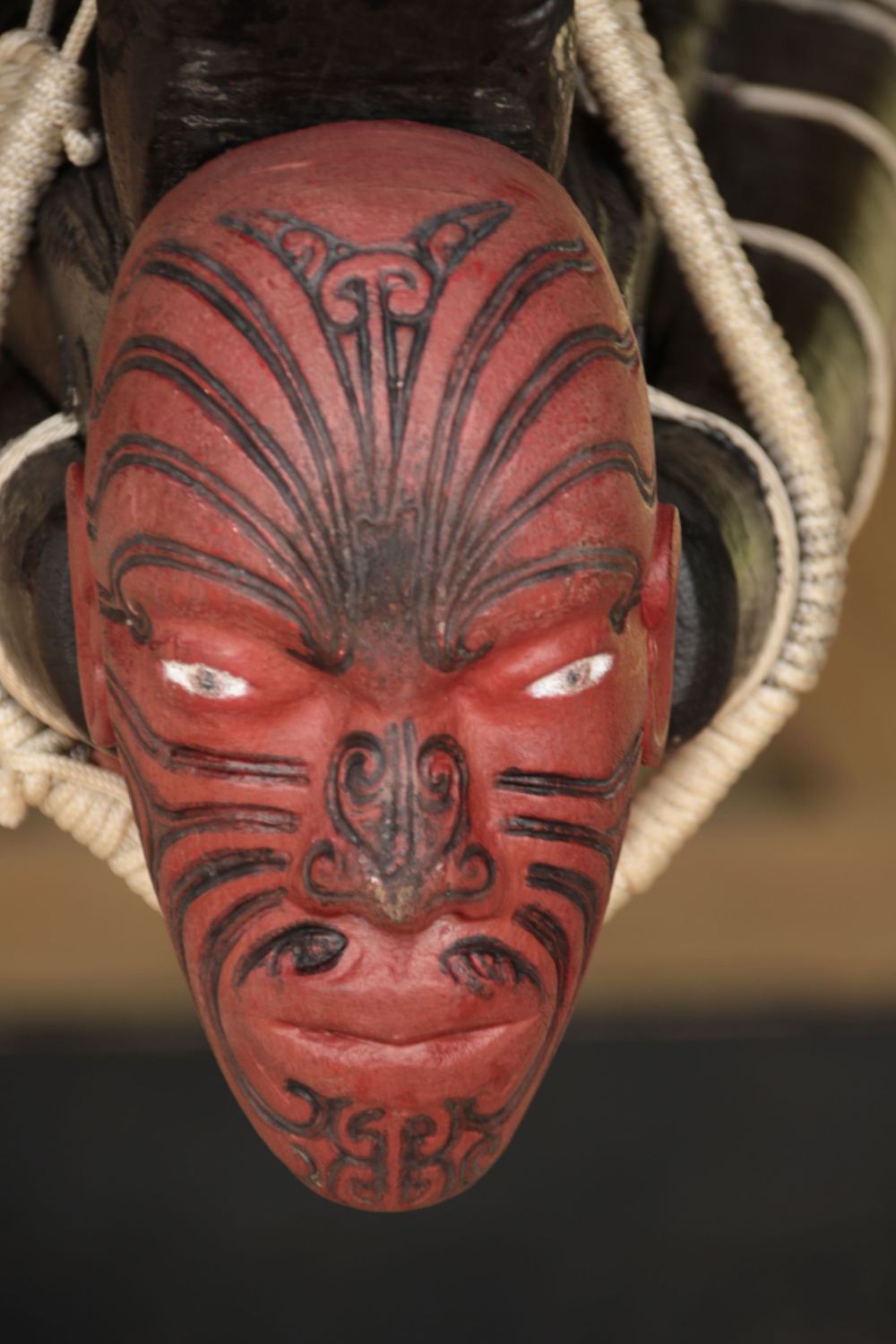 Next to the Treaty House is the Whare Rūnanga (carved meeting house) again a replica which was completed in 1940 as part of the centenary celebrations. It is a magnificent wooden structure with traditional Maori carvings inside and out.  It is here where visitors are greeted with a haka pōwhiri (challenge and welcome) ceremony where one of our group is “volunteered” as leader and has to accept the Maori welcome before everyone files inside the Meeting House to watch a display of dancing and singing.  It was a thoroughly entertaining display and showed the true spirit of Maori culture. 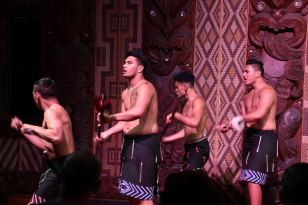 After the entertainment we were invited to walk the grounds and visit the Treaty House to view an exhibition of how Busby and his family lived.

It is clear to see how much this treaty meant to both sides and how down the years it continues to be challenged and amended to make reparation for previous mistakes.