It is time to leave Whangarei and embark on the next stage of our road trip of New Zealand.  Our destination is Rotorua, in the central region of the country close to the Bay of Plenty and known primarily for it’s Geothermal activity. However our Satnav has different ideas.  After successfully navigating us around Auckland it sends us not south, but south east, towards the Coromandel Peninsula. Eventually we stopped.  We checked the inputs, all okay.  To cut a long story short, trusting our Satnav turned a 5 hour journey into a 6.5 plus hour slog.  Who says technology makes life easier!

The landscape was turning from flat land to rolling hills, and many of them, not very high but creating a sort of corrugated effect.  Very strange. This landscape was used as a backdrop to film the Lord of The Rings Trilogy and The Hobbit.  There are tourist signs down the route off the main road, pointing to various locations where the films were shot.  As neither of us have read any Tolkein I doubt we will be visiting these attractions. 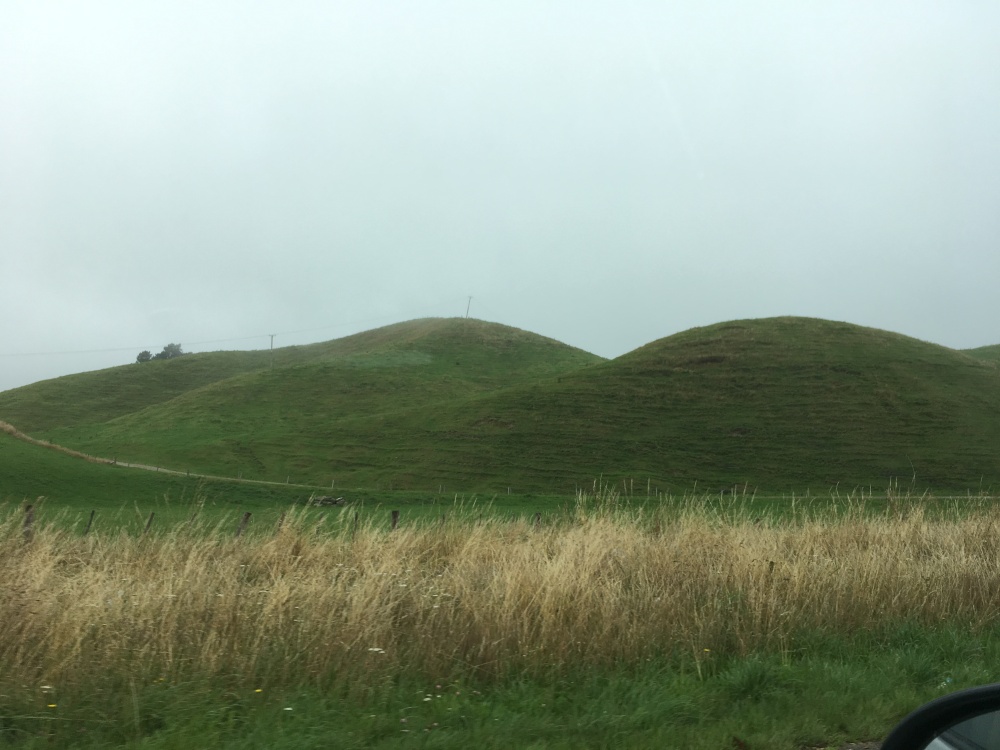 “Hobbit Hills”  The Landscape is covered in these small hills.

Rotorua is located at the south end of the lake of the same name and is supposedly North Islands most popular tourist destination with the hot and steamy thermal activity, spectacular Geysers aplenty and bubbling pools of slimy but mineral laden mud proving big attractions.  The city lies at the heart of Maori culture and there is plenty going on to satisfy those needs.  Indeed 33% of the population of Rotorua are of Maori descent. The many lakes and forest trails are an added attraction, bringing walkers, swimmers kayakers, and mountain bikers alike.  Our accommodation is on a hill at the southern end overlooking the city.  We have a fine outlook. 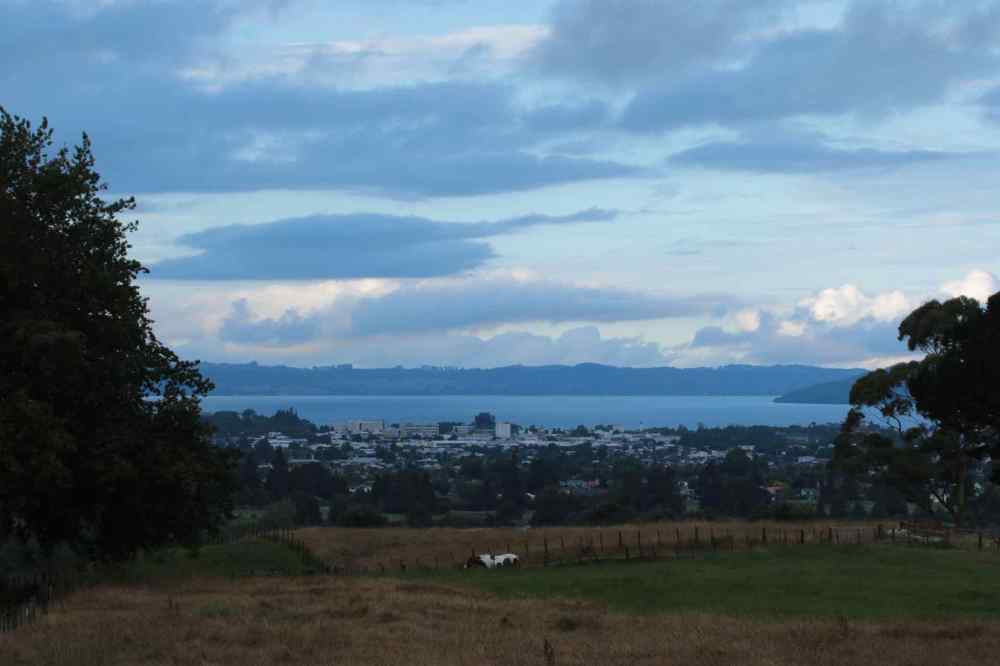 The view over Rotorua from our front window.

With all the thermal activity going on, the first thing you notice about Rotorua is the atmospheric smell of bubbling sulphur or rotten eggs emanating from all the geothermal sites around the area.  The earth’s crust is very close to the surface in this area of NZ and almost at the bottom of the road is a large tourist site where geysers and mud pools can be seen and these give off the steam that contains the pungent smell that seems to be omnipresent.

From the local I-site we obtain a city map and some leaflets (no guided walking tours in this town)  and we set out to explore our surroundings.  On the Village Green (yes it is called that) we come across the North Island Classic Car show, a collection of close on 200 classic cars, mainly from the 50’s and 60’s and several brought back memories for me growing up.  Many old Fords were on show, the odd MG and some classic American muscle cars such as Pontiac Trans-am and old Mustangs.  As is common in NZ you cant go far without ending up in conversation with the locals.  We talked at length to one chap who was collecting for charity, who gave us some sound advice where to go when we head to South Island in a couple of weeks time.  I also got into a conversation with a retired lawyer who told me his life story in 5 minutes – RNZAF, RAF (Failed), Law School – but was nevertheless very friendly, as are most people here.

From the Village Green it is a very short walk to the lakeshore.  The path takes you from the jetty where you can catch a seaplane or helicopter trip over the volcanoes out in the Bay of Plenty, around the foreshore to Sulphur Point Nature Reserve and beyond to witness even more bubbling pools and steamy pot holes in the ground.  Yes they have even named a reserve after the smelly gas that is produced.  Part of the lakeshore around Sulphur Point is barren, grey and looking very dead.  Some of the trees look frozen in time, almost petrified by some sudden shocking event.

Left:  Us at the Jetty; Right: A Seaplane departs on another trip

Shots of the walk around Sulphur Point

Feeling in need of a refreshing drink we headed back into the city centre.  There is an area here called Eat Streat which does as it says on the tin.  It is the main thoroughfare for bars, cafes and restaurants.  We stoped by at one for a fizzy water (honest, it was only 3pm) and this guy was playing live.  He looks a tiny bit like a younger Phil Collins without the long hair but was an okay guitarist and we enjoyed his set for an hour or so (Santana, Leonard Cohen and Bob Marley). 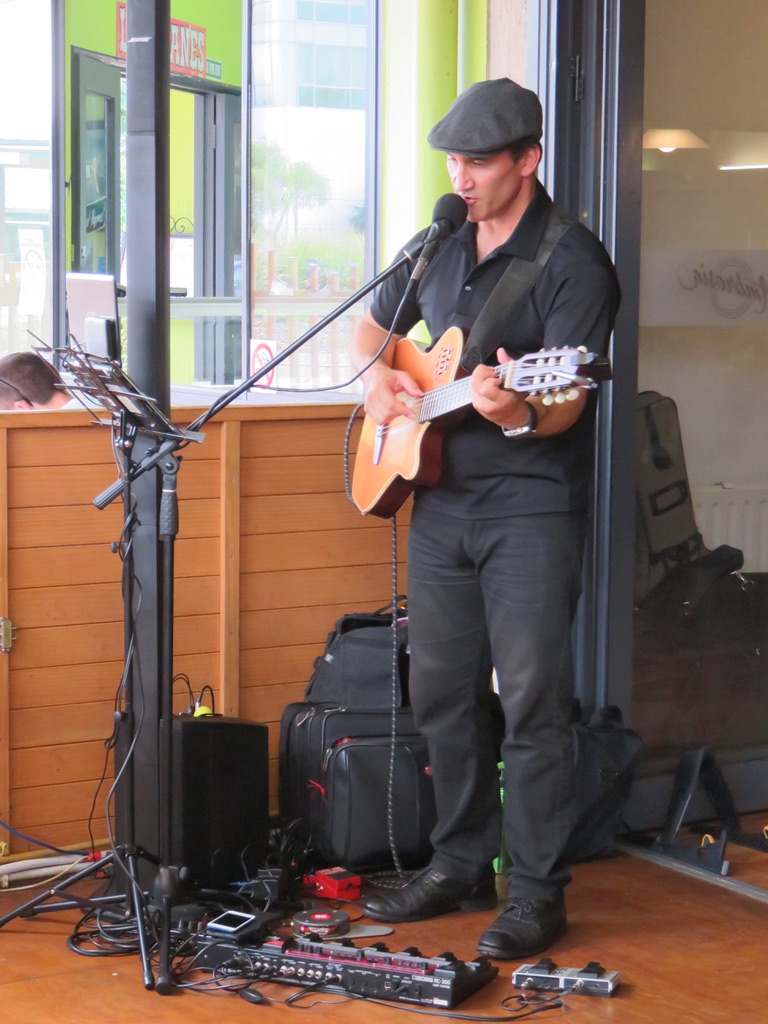 The city is very proud of it’s public art collection and the Council have laid out a trail across the city, of numerous pieces ranging from sculptures, replicas, large wall murals and even art on roadside telephone distributor boxes.  (In UK those green boxes you see that carries all the landline and internet phone connections)  We were given a free map at the I-site and followed the city Art Trail.  It takes you from the lakeshore, to the Rotorua Museum – sadly closed when we were there because the building is not earthquake proof – through the delightful Government Gardens past the Sulphur Lake -yes it stinks too – (this has its own sculpture trail) and into and out of the Central Business District to Kuirau Park in the west.  We saw some fascinating pieces and some really odd ones.  We happened on an art supplies shop whilst in the city centre and one of the window displays showed a number of painted hand saws.  Apparently there is retired lady who recycles old saws, cleans them up and paints pictures on them, mainly of animals.  They are really unusual and the proprietor was telling us he sells four or five a week.  They are quite cheap at around NZ$25 (about £12) each.  I have some old ones kicking around my garage at home so when we get home there is a new project for Lyn! 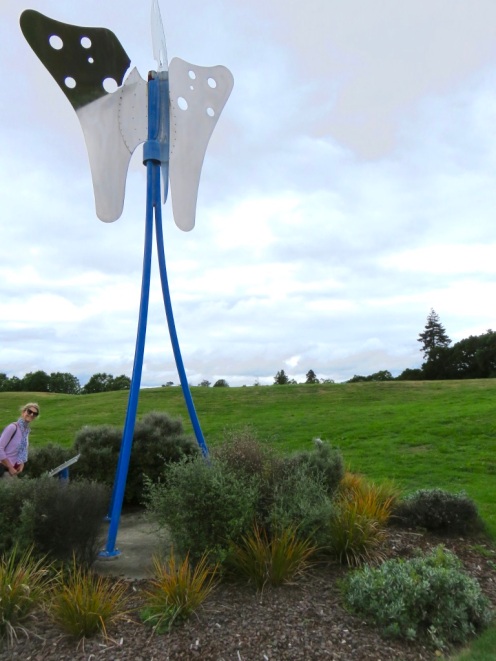 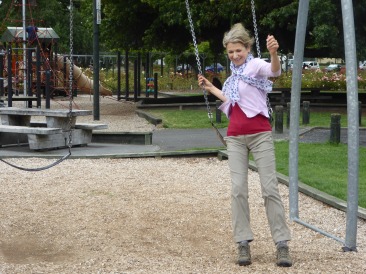 Lyn always did enjoy the swings……………..even now she can’t resist them even in the children’s play area in the Government Gardens!

A new use for old Saws

Kuirau Park has its own free public thermal pool where you can sit on the side and dangle your feet into the water.  That was hugely popular so we elected to give that a wide berth, not knowing how clean the water was  and whose feet had been in it previously!  There are also bubbling mud pools and lakes, all fenced off as they did look very hot and I am not sure of the outcome should one fall in!

Leaving aside the smell from the geothermal activity, the atmosphere in Rotorua is odd.  It is strangely quiet, even for high summer season when you would expect the place to be crammed with tourists. There was room to move and people were not fighting for a scrap of grass to sit on to enjoy their picnics.  Even the bars had ample seating space on a Sunday afternoon.  We met another English couple who made the same observations and noted that on a Monday in town, when you would expect tourists and locals aplenty, the streets were remarkably quiet. Cafes and restaurants you would expect to be full for lunch time trade were empty and even the traffic was light!

Surrounding Rotorua are lakes, hills and forests all offering a variety of outdoor activities.  A short drive from our accommodation is the Whakarewarewa Forest.  This is the home to around 170 different tree species planted since 1899 as an experiment to see which would be grown most successfully for timber.  There are numerous forest walks which we have enjoyed, especially the Giant Californian Redwood trees which are magnificent and give the forest its grandeur.  Once again whilst out on a trail we got talking to the locals,  this time to couple who gave us some great information about a local tramping (walking to you and I) group.  They were really helpful and chatty, and for me cements New Zealand as one of the most friendly places on the planet. 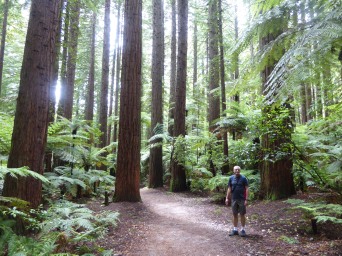 Giant Redwoods in the Whakarewarewa Forest near Rotorua

A small natural pond in the woods.  Even this has signs of geothermal activity.  Note the green tint at the far end.

Just south of the Forest Park are a series of lakes, all with their own walking trails and we have enjoyed a walk round the Blue Lake or Lake Tikitapui.  Few pictures sadly as the rain came shortly after we started walking and all cameras went in the bag to stop them getting wet. The lakes are high this year, presumably because of a wet winter and summer (in England we know what that is like!) so the path was blocked in places which meant  short detours through the bush (the locals call it bushwhacking). That made for an interesting challenge, especially in the wet! There are many tracks in this area ranging from short 15 minute walks to longer distance where a one way trip will take all day or more.  Return by boat or bus to the start point is not uncommon. 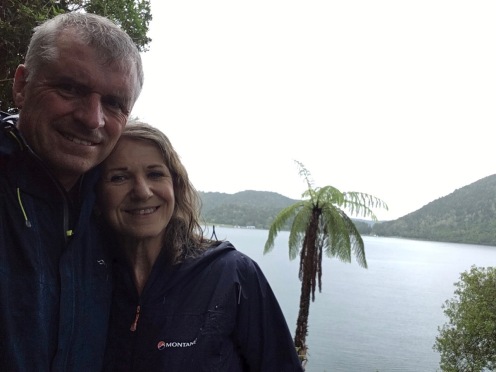 Us on the forest trails in the rain

We have one of these planned for later in the week, however it is a very exposed track and as the weather is set to improve and get hotter later in the week, (32 Celsius) that may be binned and replaced with a more sheltered walk.  At least the sun is shining now and as I write this I am  looking out over the city with some scattered high cloud, blue sky and a blue Lake Rotorua, which is change from the muddy green version we saw on Monday.