You may think from the title of this blog that it is the title of a play we have seen or an instruction for a character in a play.  Wrong on both counts.

Lady Knox is a Geyser in the Wai-O-Tapu Thermal Wonderland, a large geo-thermal area about 40 mins drive from Rotorua and where geysers, hot springs, steamy sulphurous lakes and volcanic craters can all be seen in one location.

Geysers are fairly rare phenomenon and generally formed when surface water works its way down through the earth until it comes into contact with hot rocks.  The boiling, pressurised liquid is forced upward with the resultant jet being projected high into the air from a surface vent.  Geysers on earth are found only near active volcanic areas and the geyser effect is due to the proximity of magma or molten rock. As mentioned in a previous blog, this area of New Zealand sits atop a large geothermal area so geysers can be seen and are a popular tourist attraction.

The main feature (Lady Knox) erupts at around 10.15 each day and is named after Lady Constance Knox the second daughter of Uchter Knox, the 15th Governor of New Zealand. It is quite a spectacle and draws a large crowd, so much so that they have constructed a seated auditorium around the vent far enough away so that the audience do not get showered by the fall out but can get close enough to the action to appreciate the science and forces involved!

On the day we visited, at the appointed time a bloke who works at the Thermal Village rocked up and began telling us about the Geyser and how it was discovered.  Now you may think it was found as a result of some in depth scientific or geological study over a long period of time.  Sorry all, nothing so educational or inspirational.  In 1901 New Zealand opened its first open prison at Wai-o-Tapu with the objective of accommodating some of the better behaved prisoners from around the local jails of Rotorua.  A gang of these prisoners out on a work detail happened upon a clearing with a spring which was venting hot water.  It is said that they were using the hot water from the spring to wash their clothes and themselves with soap, and discovered that the spring could be made to erupt by adding the soap to the vent from which the hot water was pouring.  Picture the scene the first time they discover this; someone drops the soap down the hole and suddenly whoosh!, hot steam and water shoots into the air through the vent, scattering these men.  We do not know if they stayed and recovered their clothes or just ran!

Now we know why it erupts at around 10.15 each day.  One of the staff turns up, gives a little speech of welcome and explains the above, drops a bag of surfactant into the vent and steps back.  It takes a couple of minutes but then you see foam bubbling up over the vent cone, then suddenly that familiar jet of water launches 20 to 30 metres in the air and the geyser is live.  The visible spout you can see was constructed of rocks around the base of the spring to enhance the eruption and over time, silica from the liquid has built up to produce this white cone from which the spout erupts.  Sadly, as this geyser was created at the beginning of the 20th century it has no Maori name, just that of the second daughter of a former Governor of NZ.  A bit sad really. 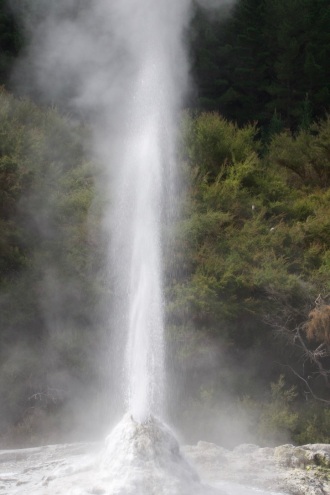 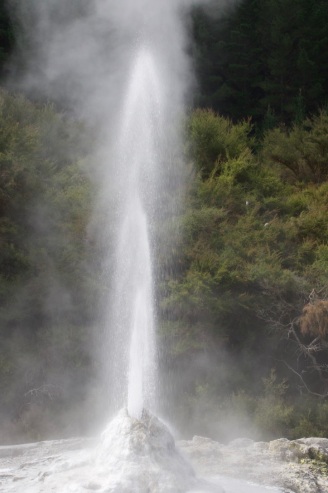 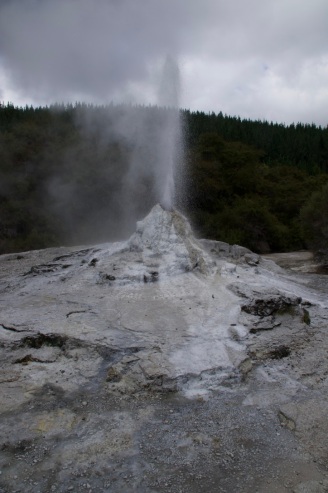 However that is not all to the Wai-O-Tapu Thermal Wonderland. As you enter the main site, the landscape changes.  Yes some of the brushwood scrub is still there but deep craters hissing steam or gurgling hot water, hot bare rocks and steaming pools and lakes cover the area and mineral laden rocks exposed to the open air. The walk around is fascinating, revealing the strength and force of the activity happening just below the earths surface.  As some of the pictures illustrate there is a great deal going on beneath our feet, especially here in Wai-O-Tapu. 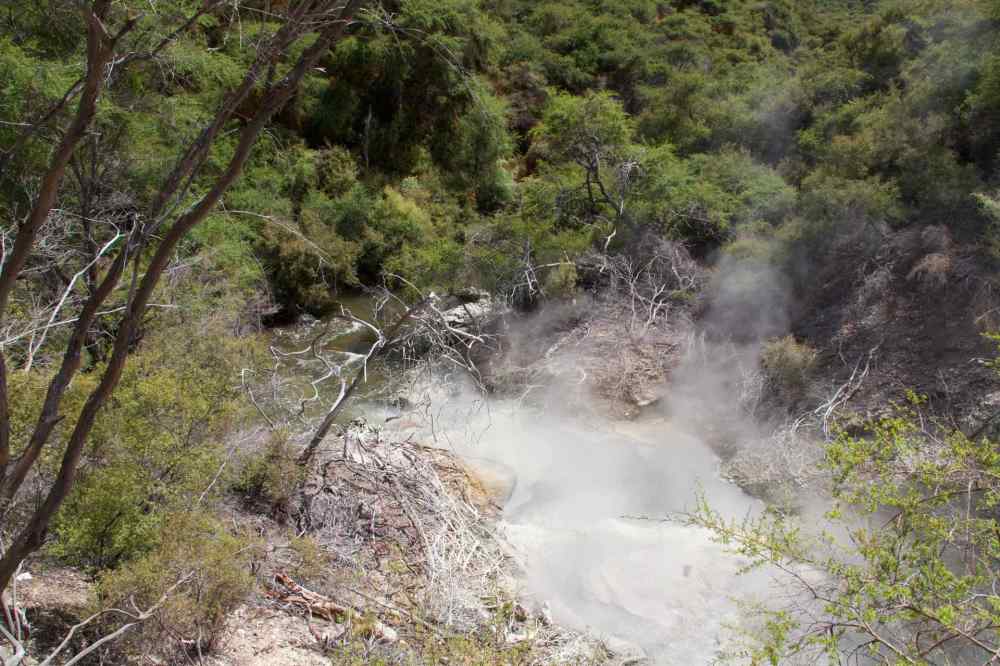 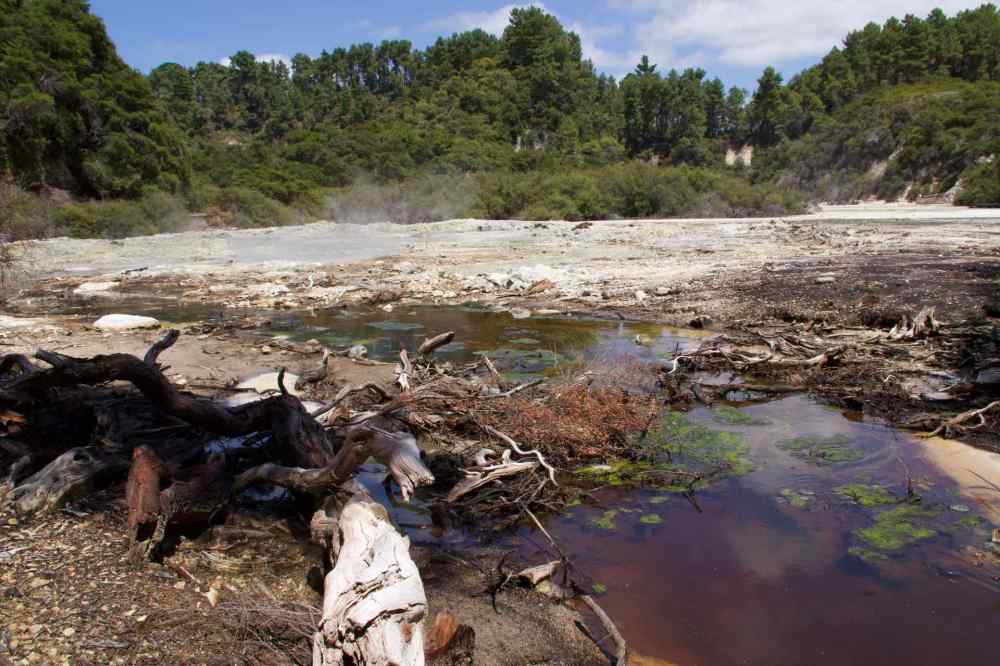 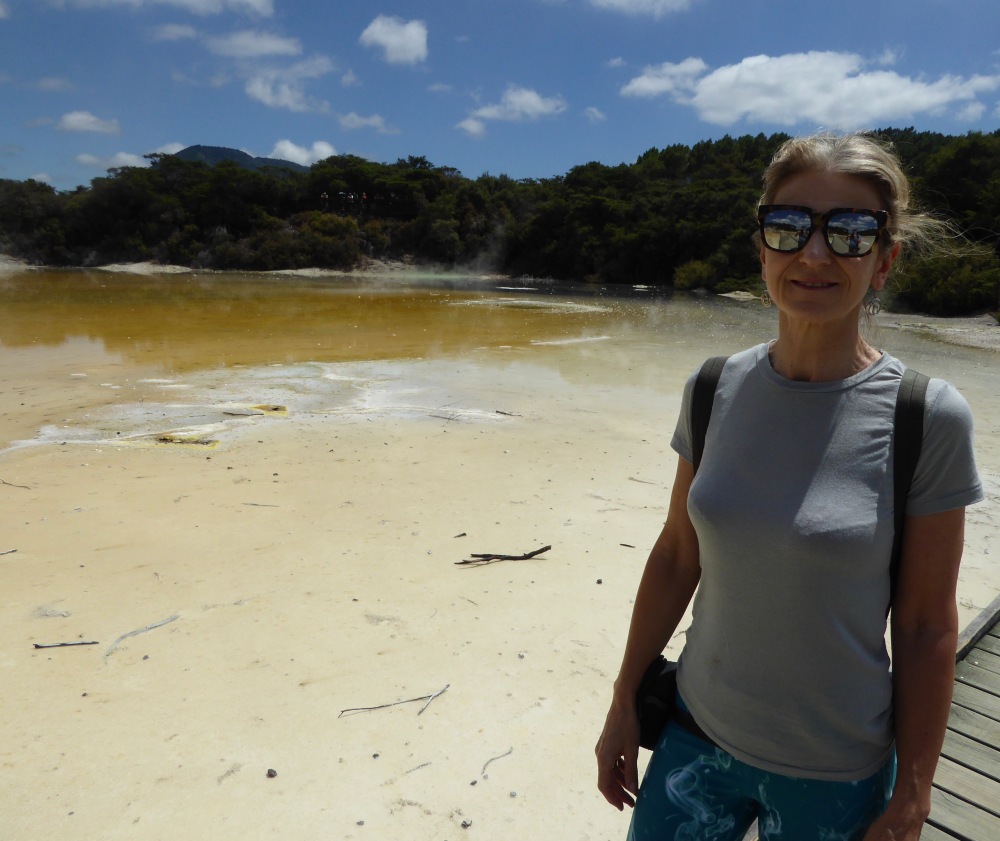 Also close by is the Mud Pool.  Lovely I can hear some say.  Well these pools spit and gurgle mud from submerged gaseous vents on a regular basis, throwing hot runny gloopy mud into the air.  The viewing area is fenced off as the surface is very hot and those who have enjoyed mud pie facials as spa treatments, you would not want one from this pool! 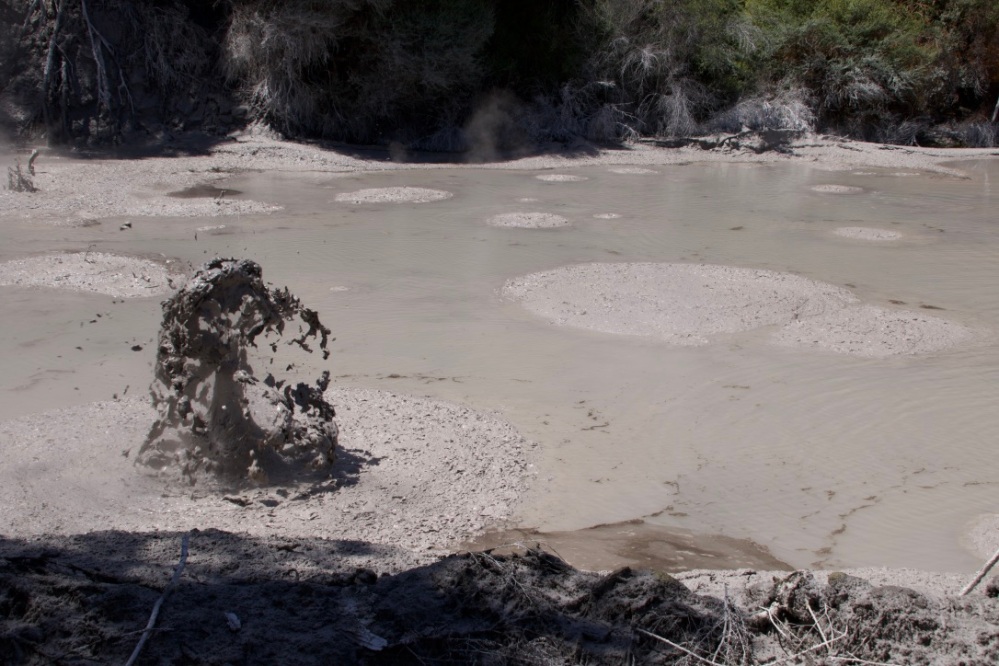 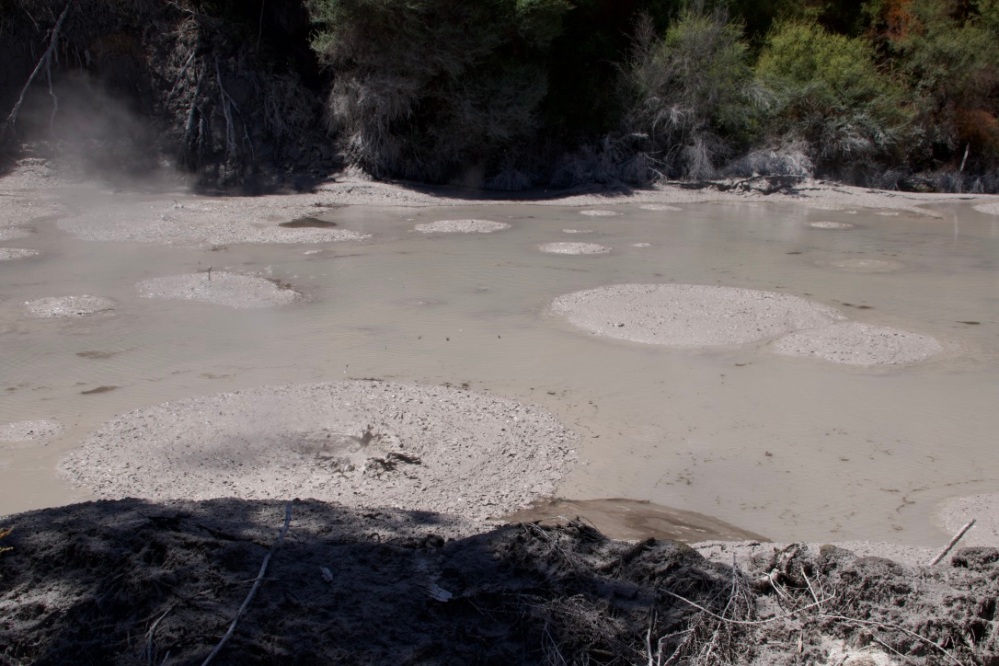 Three views of the Mud Pool.  Anyone for a Mud Facial?

Close by this area is the Waimangu Volcanic Valley.  We decided not to take the trip down the valley as it was too late in the day but this area also has a very interesting tale.  It is the worlds youngest geo-thermal system as it was formed as a result of the Mount Tarawewa volcano erupting in 1886. Lake Rotomahana exploded to 20 times its original size and all plant and bird life in the immediate area was extinguished.  However that was not the last event.  In 1900 the Waimangu Geyser erupts sending black scalding water, rocks, sand and steam up to 450 feet into the air and 17 years later a huge steam blast re-excavates a crater (Echo Crater) destroying the adjacent land and forming a lake out of what was Echo Crater to become the largest hot water spring in the world.  Again this illustrates the power lying beneath our feet.  Interestingly, as its formation was so recent it does not have a Maori name.

One reason for us coming to New Zealand is for the walking.  Now many outdoor enthusiasts may have heard of the Milford Track or the Routeburn Track on South Island.  These are three to four day tramps using huts as overnight accommodation.  However you don’t need to embark on these expeditions to enjoy walking here.  There are many locations across the country where day and half day tramps can be found.  We found two that stand out close to Rotorua.

The first we tackled was a hill climb up Rainbow Mountain.  It was a 90 minute effort to get to the top but boy was it worth it. Despite the visibility not being the best we still had some stunning views in all directions. 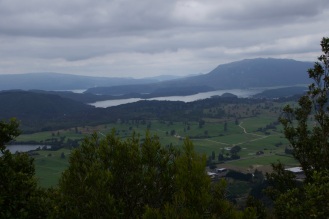 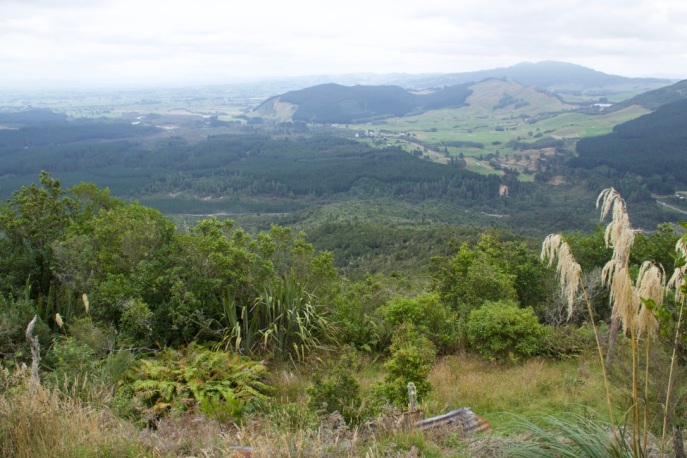 Rainbow Mountain Clockwise from top left:  Crater Pool on the ascent. Lyn at a viewpoint; View from the top; Memorial to those fallen in battle; Another view from the top.

Close by Rotorua are the Whakarewarewa Forest Walking  Tracks. We walked one trail earlier in the week in the rain so on our last day in Rotorua we decided to re-visit to walk one of the longer trails.  It was a beautiful hot sunny day and the walk was excellent.  En route we met a woman and her niece out riding their horses over an equestrian trail.  She mentioned that they were having an unusually hot summer, long may it continue.  The walk, about 11km, (NZ went metric for everything including the NZ Dollar in 1967) was brilliant, up and down with some fantastic views from the high points.  The track we followed was well marked though steep and a little tricky underfoot in places following some heavy rain a few days previously. 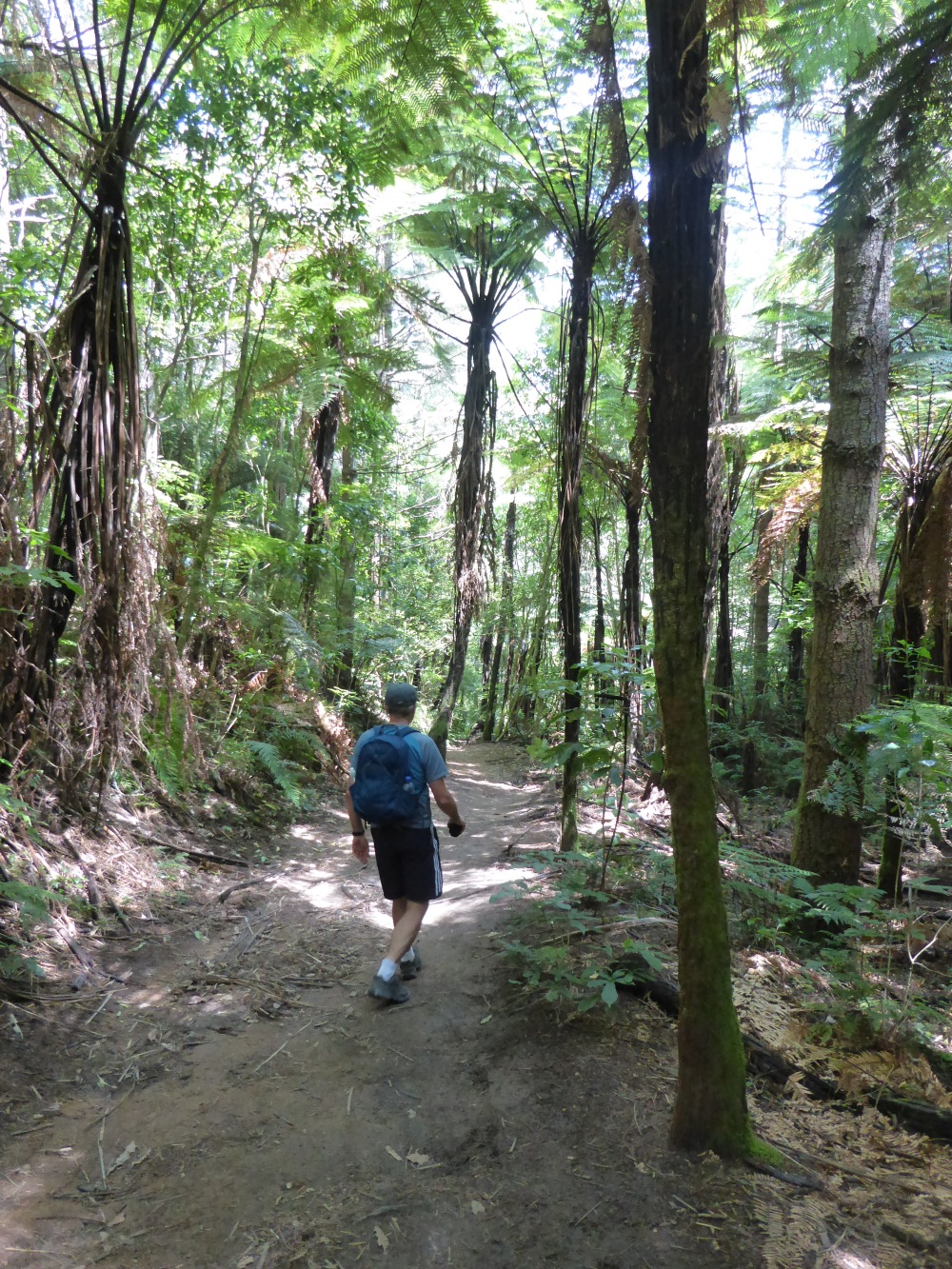 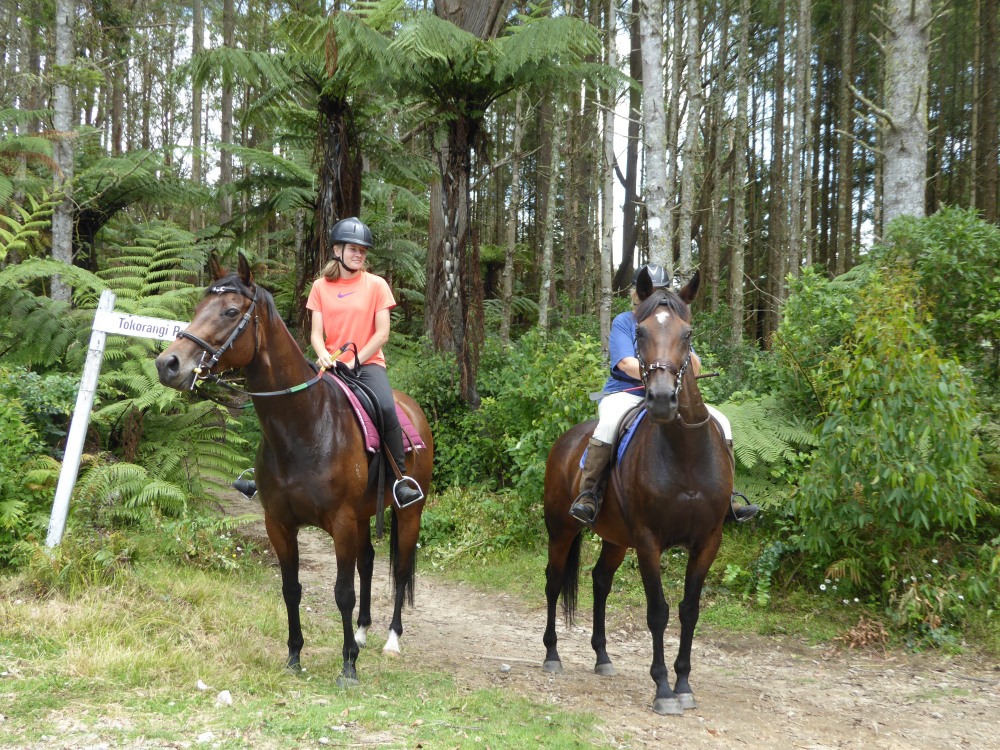 Top to bottom:  Panorama from the top of the hill on the Redwoods Walk; David in the woods; The two Horsewomen not of the apocalypse; Giant Redwood Tree.

We are coming to the end of our time in Rotorua.  It has been very interesting and we have really enjoyed our stay.  It is time to move on and explore new destinations.