Mention the name St Helens and for me it creates an image of a town in the Northwest of England famous for its Rugby League team and the industrial north of years ago.  As with many areas in Tasmania, British names have been “borrowed” and used by the first settlers to name their new settlements.  And so it was with our next destination.

St Helens is located on the east coast of Tasmania at the southern end of the Bay of Fires. It began life as a whaling station in the 1830’s, but with the arrival of hunters hunting the bays Black Swans for their downy under feathers, and later the  discover of tin nearby, the town’s population swelled as it evolved into a shipping port for the mines. Today the town, which was named after St Helens on the Isle of Wight, and not the urban conurbation on the edge of Manchester, is home to Tasmania’s largest fishing fleet and is a mecca for tourists and anglers alike.

The first impression we got of Gull Cottage as we drove up the gravel drive way, was wow!, is this the right place?  Located on a hill overlooking Georges Bay, a five minute drive from St Helens, Gull Cottage was the perfect location.  Close to the town, but rural enough to see Wallabies and Pademelons crossing the front garden at dusk. 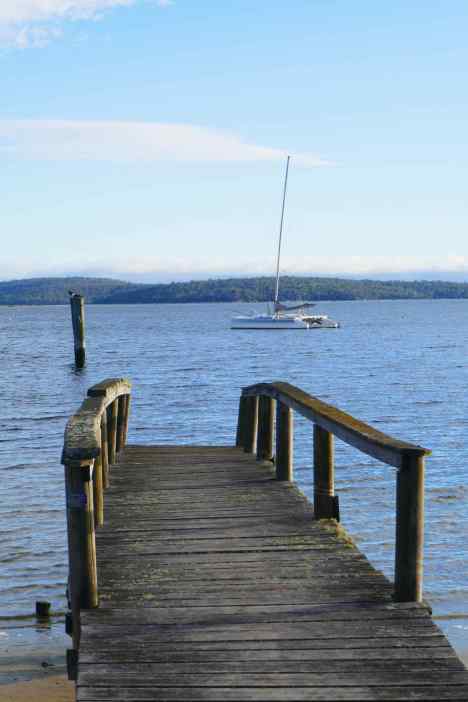 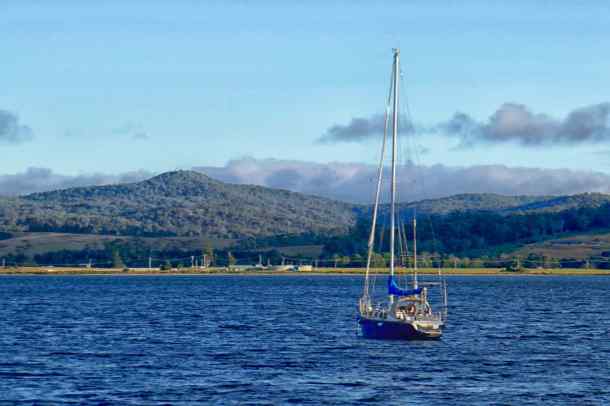 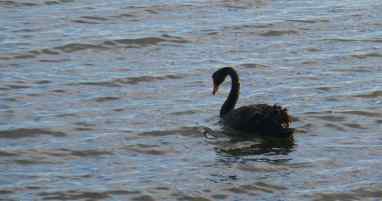 The lady in the Tourist Information Office suggested that, among other things, we should visit the Museum next door (it was closed) and the monthly Saturday Market.  So whilst I went to try and get a haircut at the town’s only barber (that was closed too), Lyn had look round the market.  The lady at the I-site said it would be brilliant, with lots of arty and craft stuff, all original and hand made, right up Lyn’s street!  It wasn’t.  It was like an indoor car boot sale, or what we used to call, a jumble Sale when we were children all those years ago.  Yes there were one or two stalls selling home made jams or produce and the odd bead seller flogging home produced necklaces, but on the whole, it was people selling their junk.  Odd glass trinkets, very old cheap records of some old Aussie band that no-one outside of Australia had ever heard of, and dusty old paperbacks that had not seen the light of day for many a year.  We lasted about five minutes then headed back out into the rain, preferring that to watching people try and sell their old junk!  Time for a coffee!

Views in side the Emporium Coffee shop – another multi-purpose cafe-cum-antique shop, this one in St Helens.

A short drive away from St Helens is Binalong Bay, the southern end of the Bay of Fires.  From there is a path that takes you round the headland to Skeleton Point and on to Humbug Point.  When we arrived at Binalong Bay the sun was shining, there was a little or no breeze and a wide expanse of white sand.  Whats more, we had it virtually to ourselves.  We walked the length of the beach to orange algae stained rocks at the far end, and then walked back.  By the time we made it back to the car (about 2 hours) the car park was full and many more people had come down to the beach.  Oddly they all seemed to congregate at one end, no-one seemed to want to walk a little further up the beach for their own space!

Collage of images from Binalong Bay

From here the car park for the start of the coast path to Skeleton Point and Humbug point is about 5km away.  We headed there on another day, when the weather was less kind.  The wind was stronger, there was rain in the air and the swell was running harder.  We walked along the track through bushland with the cliff edge a short distance away.  At one point the bushes parted so we walked down on to the rocks.  About 70 metres away was an outcrop on which were sat a small group of black and white birds.  We got quite excited as we thought they were Little Penguins.  Only when we got back to our cottage and were able to look at the photographs in close up, did we realise that they were not penguins at all but we think Black Winged Petrels.

We eventually reached Skeleton Point, posed for a few photographs and walked on towards Burns Point and our planned destination, Humbug Point.  Then the weather intervened and it started to rain, no worse than that, it lashed down.  We were lucky in that we were under cover of the trees, were carrying lightweight waterproof jackets, but we could see the rain drops hitting the rocks and bouncing up, and we were getting wet.  We looked at each other and decided that walking on was not a good idea, so we turned back.  By the time we reached the car the sun was shining through the trees but it was still spitting with rain.

Further up the coastline is a point known as “The Gardens”, an outcrop of rocks and a scenic viewpoint in the Bay of fires.  The Gardens is the last point you can reach by sealed road from the south and as we drove up there it began to feel like we were driving to the end of the world.  The road got narrower and rougher even though it was still sealed.  Again the weather was changing, a dark band of cloud hung across the bay and thunder was in the air. we pulled over and I nipped out to snap a few pictures before diving back into the car hotly pursued by a second band of rain.  I just made it back and Lyn drove back down the road in an almighty thunderstorm.

Left:  Looking back towards Binalong Bay; Centre and right:  View towards The Gardens rocks just before the storm

Having spent a couple of days beach combing we decided  that our last trip out from St Helens would be inland.  Our eventual destination was Derby (pronounced Dur-bee by the locals and unlike the UK’s version which is pronounced Darby) and, as with many of our road trips, involved an occasional diversion off the main road to see something that takes our fancy.  No different here.  After about 25 minutes driving we saw a sign that said St Columba waterfalls and Pyengana Cheese Factory.  Looked interesting so we left the main road and headed off down a narrow lane.

The road came to an end in a small turning circle, and you parked where you could, without obstructing other traffic.  The path to the waterfalls dropped steeply down and then back up slightly.  All the time the noise of the water could be heard through the trees so they were not that far away.  After about 10 minutes we arrived at the viewing platform just above the base of the falls.  There was an information board which suggested that these were the largest falls in Tasmania at over 90 m fall.  Although it was mid summer the falls still had plenty of of water and made a healthy  noise.

Top Left:  Fern Leaf overhanging the path to the falls; Centre:  The falls through the trees; Right: The falls in their glory.  Bottom row left and centre: The river flows on: Right: Lyn admiring the falls.

At the other end of this no through road, not far from the turn off was the Pyengana Dairy Company, home of the previously mentioned cheese factory. Pyengana is an Aboriginal word meaning the meeting of two rivers – and the farm that produces the milk for the original cheeses sits in the valley around the factory.  Their website says that “they have been producing cheese for over 130 years” and it is aged in a “cave” like environment which you can view through a glass pyramid located in the cafe above. I love cheese, and they did have some tasters in jars on the counter for people to try.  I did sample one or two, but the difficulty of getting a whole 5kg cheese back to UK in March or even a small pack to the mainland in a week or so precluded any purchase, save for a couple of coffees. Not so thrilling were people leaning over the pyramid staring at whole cheeses maturing, as if they were expecting something exciting to happen!

Left:  The Cheese Factory and Cafe; Centre and right: The valley around the “factory”

From Pyengana it was another hour’s drive into the hills, to the village of Derby. A rather forlorn looking village, it started life as a thriving tin mining centre in the 1870’s which attracted thousands to the area.  However the mines closed for the last time in the late 1940s and the exodus of people began and never seemed have stopped.  Derby is slowly re-inventing itself as a mecca for mountain bikers, thanks to its location, in the Ringarooma River Valley, and the creation of a network of challenging mountain biking trails.  So good are these trails that the World Endurance Championships were held here in 2017.

It was clear when we drove in that this was what folk were here for.  The car parks and camp sites at either end of the village were stuffed with all sorts of trailers, camper vans, tents and other temporary arrangements, but nearly all had mountain bikes, except for us. As we walked along the main street we saw a museum, general store (more of which shortly) a curiosity and gift shop, a pub and more mountain bike shops than any other type, all open, all doing a roaring trade in hiring, spares, maps and advice.  You were in more danger of getting run down by a group of bikers than a car!

The museum was dedicated to the history of Derby and the mining disaster which happened in 1932 and helped to hasten the closure of the mines.

Clockwise from top left: Statue outside the Derby Museum; Lyn as teacher; What might have been! Me and a cricketer; Draconian rules for teachers; Lyn as a pupil! 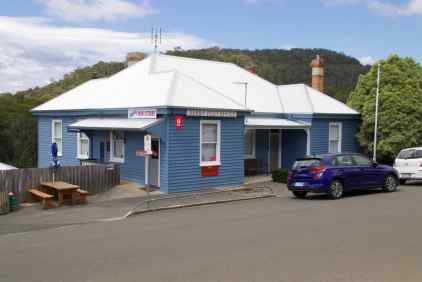 Collage of images from Derby.

I mentioned the general store.  We would have bypassed this shop were it not for a large white Triumph Ace 900 motorbike in the window.  I have a passing interest in anything that originates in the Birmingham area (Triumph motorbikes used to be built in Meriden) so we went in.  As I stood admiring the bike and taking the odd photograph, Lyn got talking to the bike owner, who also owned the store.  He was a retired mounted police officer, originally from Darwin (NT).  He and his English wife had moved to Tasmania because she wanted four seasons in a year and not one or two, which happened in Darwin.  He said Darwin it is either warm and dry or hot wet and very humid! They came to Derby and bought this store.  They were cleary motorcycle enthusiasts  and had bought the bike with the intention of eventually shipping it and them, to UK to travel and to ride in the Isle of Man Classic TT event which is run in July each year.  Sadly his wife died three years ago so they never made it to the Isle of Man.  He has sold the store and intends to travel to the UK in a  couple of years, buy a motorbike there and as part of his touring, ride the bike on the TT course in memory of his wife.  It was a sad story but uplifting at the same time.  We eventually wished him luck and bade him good day. 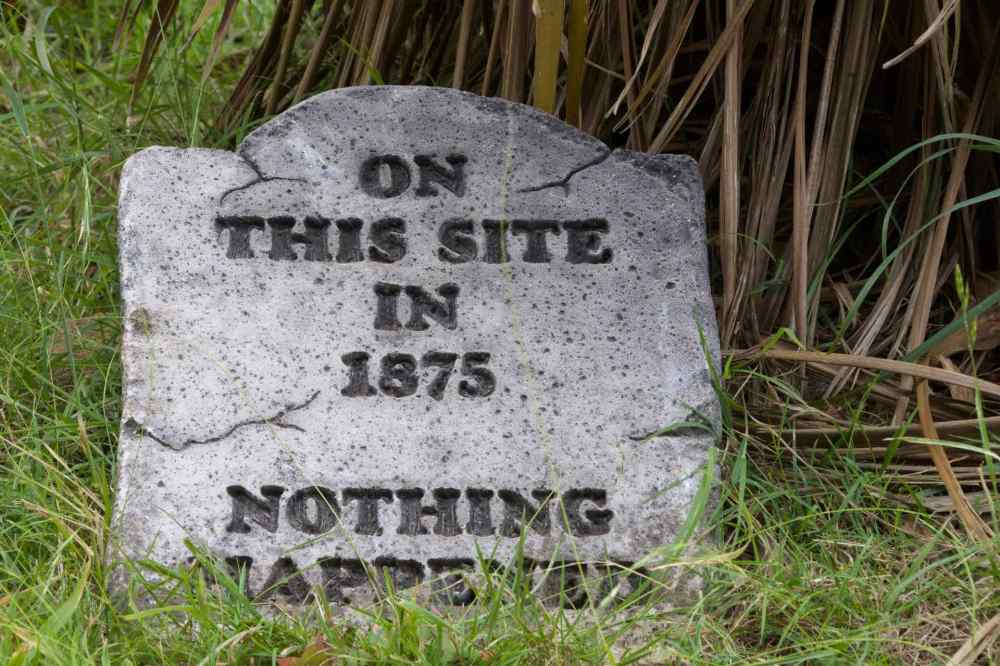 Seen outside a house in Derby

St Helens was the penultimate stop on our “Tour de Tassie.”  Our last stop beckons, a short drive down the east coast to Swansea another village with a  borrowed name.