After leaving the Woodchopping capital of Australia (see previous blog about Latrobe) it was a short drive to our next stop, Deloraine.  For reasons we can’t remember, we only planned two nights here, which means we have to make the most of our 1.5 days sight seeing.  A brief encounter if you like.

Deloraine is situated in the foothills of the Great Western Tiers mountains which lie to the south, and is bisected by the Meander River. It is an arty town with many galleries and craft studios open to the public to wander round and meet the artists and crafts people. Time to explore on foot.  Our walk round  started on the river walk, a lovely path along the river, over  footbridge and down the other side.  Other than taking us partly through the towns tourist caravan site, it was a pleasant walk with some unusual sculptures mostly done by local artists.

From here it is a short walk to the main street, Emu Bay Road.  As well as the many Georgian and Victorian buildings located in the town, there are a number of small sculptures located on plinths at various points on the street.  As we ambled up the street we were able to drop into the galleries and meet those working there.  In one of these we met an artist who had produced some very original canvases of flowers; original in that they were photographs in which she had used Photoshop to create some unusual looking images that had been printed to canvas. 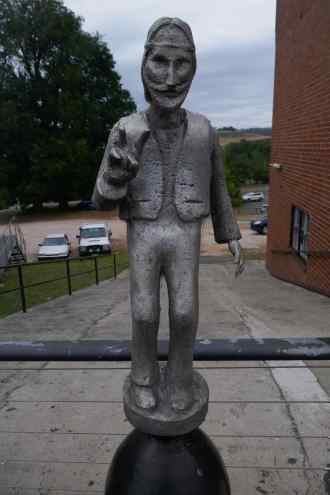 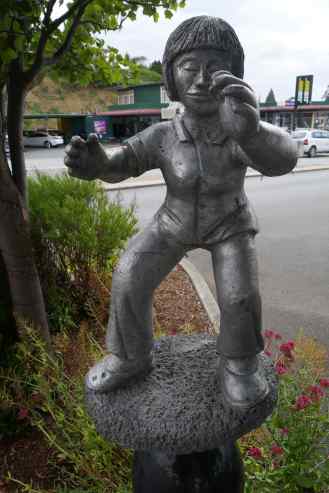 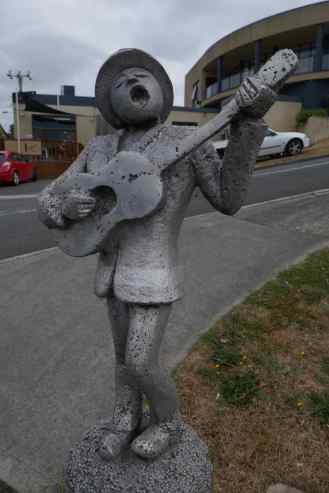 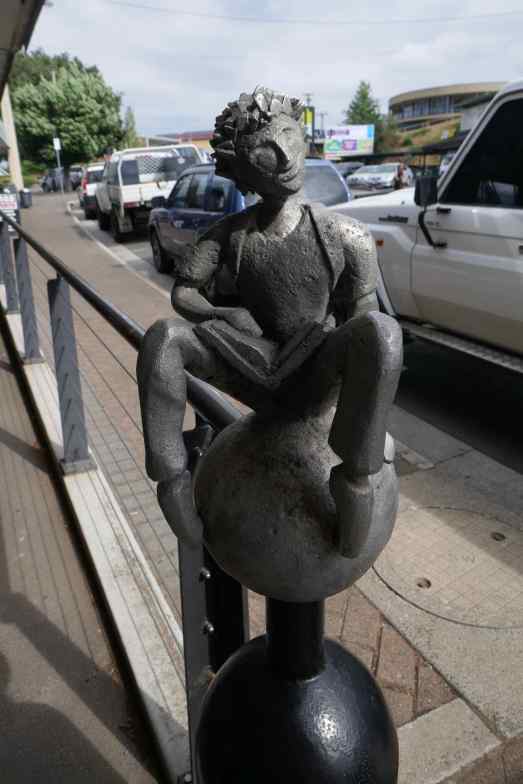 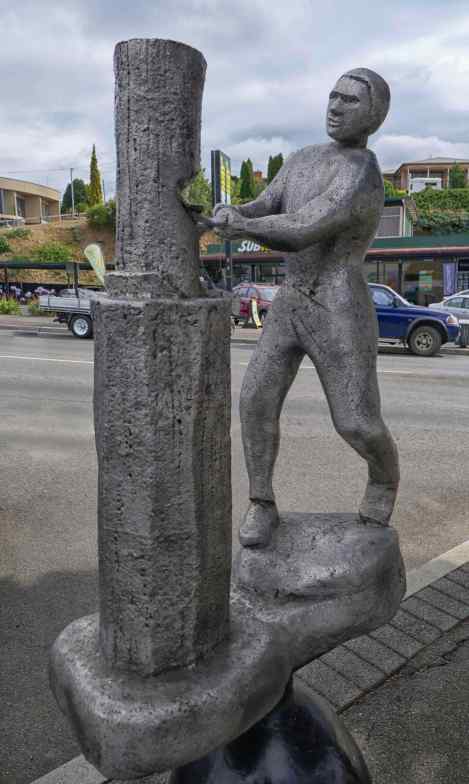 Having spent a pleasant few hours exploring Deloraine we made our way to our accommodation, a small cottage in the grounds of a large mansion about 10 minutes walk from the centre of town.  It was a lovely cosy place with a long history which the owners had documented in a folder in the cottage.  The cottage was compact but probably the best equipped we had stayed in even down to the bread, milk, cereal, eggs and butter supplied for breakfast!  Never had that before…anywhere! The best bit of the cottage was the owners dog, Jock.  A cute, friendly little dog, he came visiting when we were leaving, looking for a spare hand for some fuss!

Jock outside our cottage in Deloraine

Launceston is Tasmania’s second city and about half an hour’s drive from Deloraine and our destination for our one whole day here.

George Bass and Matthew Flinders  first discovered what is now the Tamar River as part of their 1798 expedition of discovery.  It was not until 1804 did the first settlers arrive from England to set up a military outpost at nearby George Town with the intention of keeping the French out. Whilst here an expedition scouted further south and found the present day site of what has become Launceston.   It was named after the noted Cornish town of the same name though Tasmanians pronounce it “Lonsesston” rather than the English way of “Lawnston”

Its early settled history saw the city as a port as well as a military headquarters and the later discovery of tin in the surrounding hills further confirmed Launceston as a major trading hub.  It has become an important service town for the rich agricultural area that surrounds it.

The locals would argue that their city is much better; they have more elegant architecture, more beautiful parks and lovelier surroundings than the capital, Hobart to the south.  Sadly for us we had very limited time in Launceston to find out.  It was suggested to us, when planning this trip, that Launceston was not worth the effort of a longer stay. As we discovered too late, Launceston is worth the effort!

The main focus of our visit would be to the Cataract Gorge, a magnificent natural feature where the bushland cliffs and the  South Esk river empties into the Tamar river.  Located just a twenty minute walk from the Kings Bridge and Royal Park it nevertheless makes us feel totally remote from the city. From the car park and First Basin, as well as the Gorge walk to the city, there are two further walks, up to Second Basin and and further on to Duck Reach, site of the earliest municipal hydro electric scheme in Australia, opened in 1895. 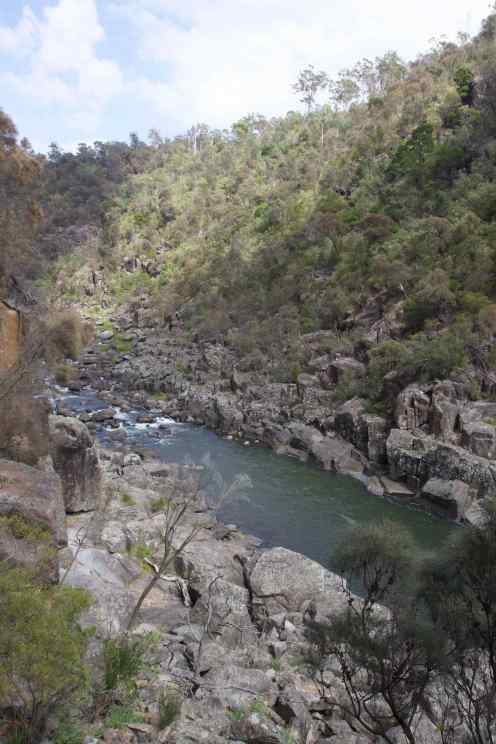 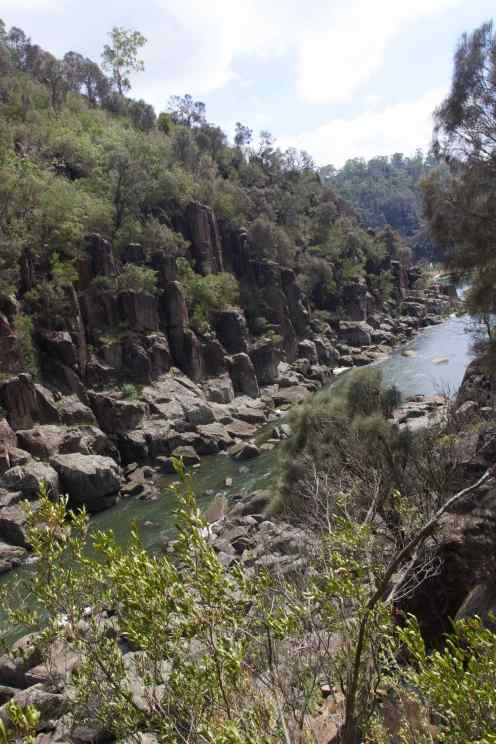 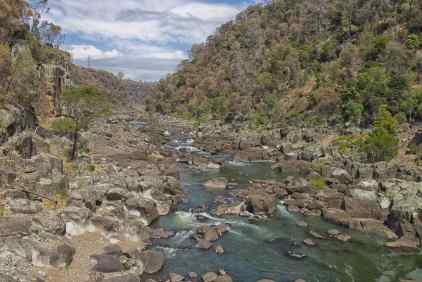 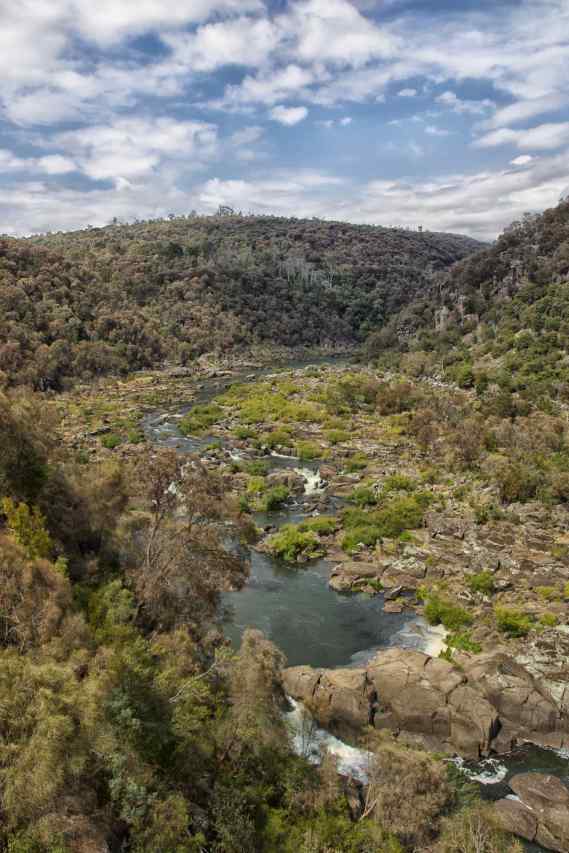 Views of the gorge on the way to Duck Reach

We drove into First Basin, parked the car after looking around to see what this place had to offer.  As well as the walks and other tourist facilities it has the worlds longest  single span chairlift which crosses the gorge over a lake.  We elected to do the walk up the gorge to Duck Reach taking advantage of the lookout point half way along to admire some of the amazing views of the gorge and the forested sides. The route was a narrow track with a number of fenced boardwalks secured into the side of the cliff face. 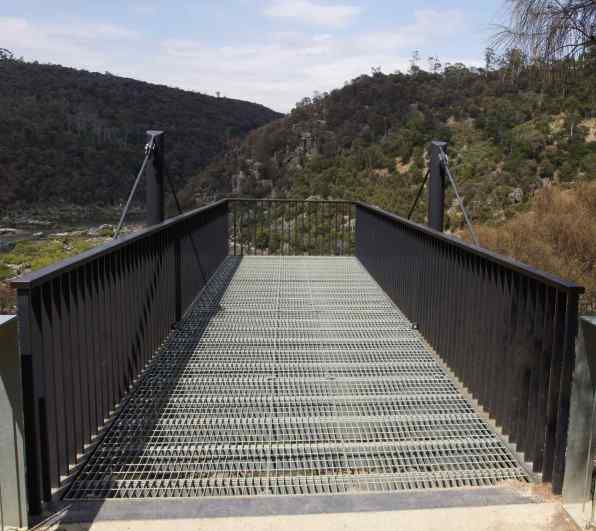 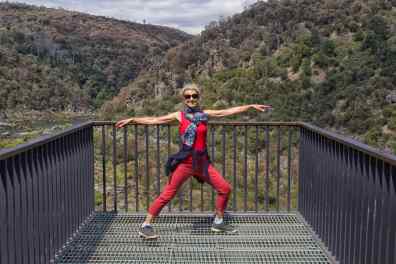 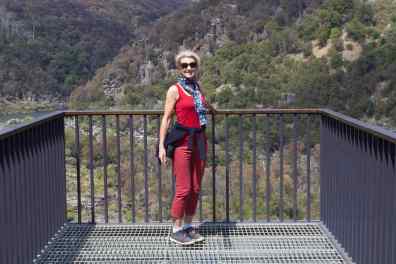 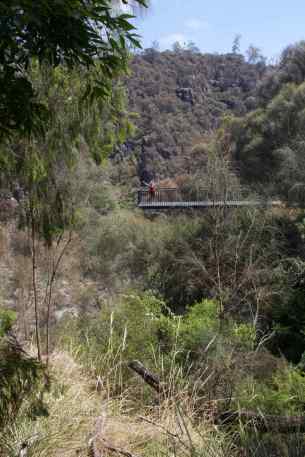 At Duck Reach, there is a choice, retrace your steps back to First Basin or cross the gorge via a wobbly bridge and follow a steeper, more forested path back to the start. A quick glance at the sketch map provided at the visitors centre suggested that the steep route back was away from the gorge.  It was a hot day and we still wanted to visit the city so we took the easy option.  After lunch we walked down the gorge to the city to visit the Queen Victoria Museum and Art Gallery, which we eventually found, no thanks to my street navigation which that day had deserted me!

The Queen Victoria Gallery is an old building hosting four exhibition rooms. One room focussed on Aboriginal art.  We were particularly taken with some of the work and one painting in particular entitled “Tunnerminnerwait and Maulboyheenner” by Marlene Gilson.  These two boys were taken to Port Phillip for reasons unknown.  At some stage in their early lives they were charged and convicted of murdering two sailors and sentenced to hang.  The painting depicts the two boy in traditional dress at the moment just before the execution with the priest to the left and the dark gallows behind.

Retracing our steps from the gallery, we walked back up the gorge, still marvelling at the beauty and ruggedness of the gorge, and wondering why we did not plan an extra day in Launceston.  Ah well, there is always the next time!

The walk back up the gorge to First Basin

As I have already suggested, our time in Deloraine was limited and it was time to move on to our next destination, St Helens which lies on the north east coast.  We had time for a couple of hours dalliance in Deloraine though, checking out more galleries and arty places.  I was especially taken with a cafe that also sold motorbikes and antiques in the same place. This was an original use of space as the whole room was just too big for just a cafe. 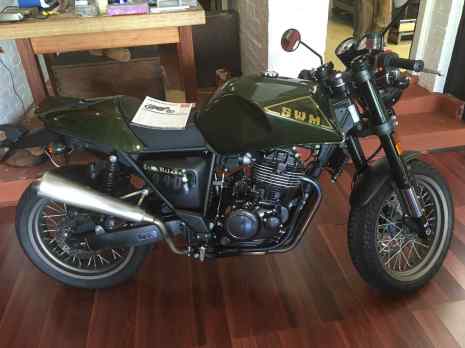 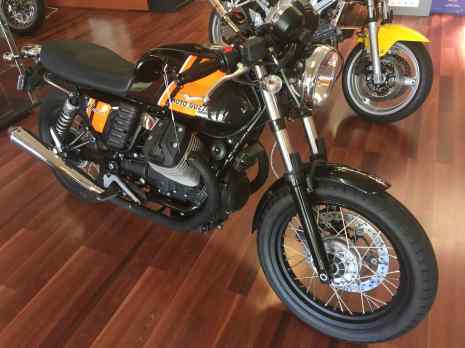 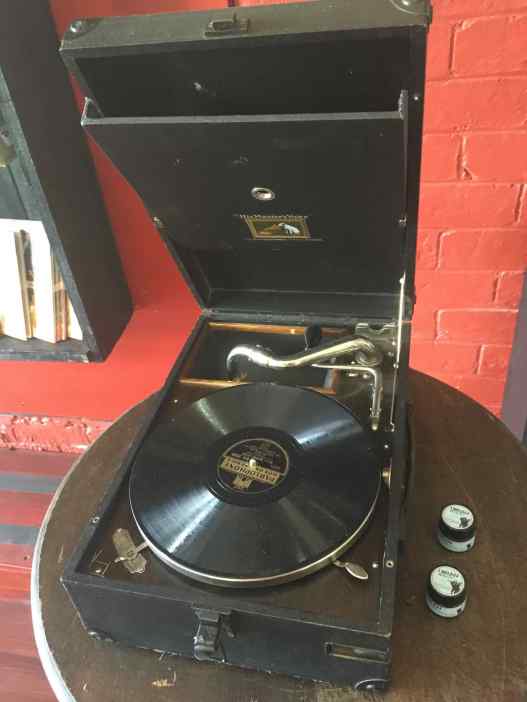 Cafe sharing with the motorbikes and an antique gramophone.

We had two options for our drive to St Helen’s, the quick route or the mountain route.  As Lyn suffers from travel sickness it was to be the quick route, but even this was twisty in places as we came down from the high plain into St Helens. Once again on a travel day the weather turned rainy and a bit stormy which is okay as we are not out doing stuff. 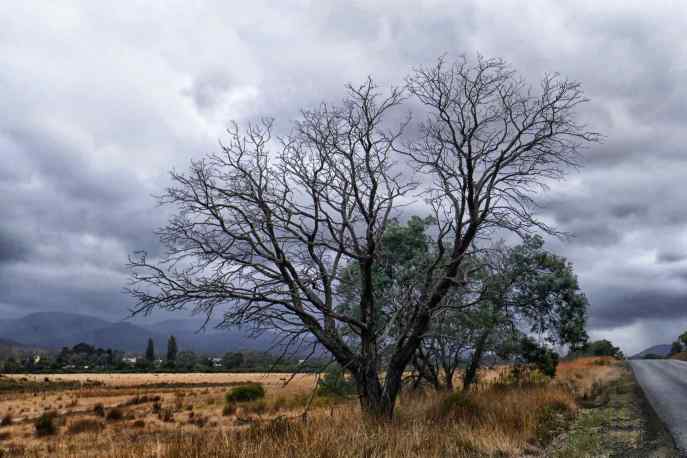 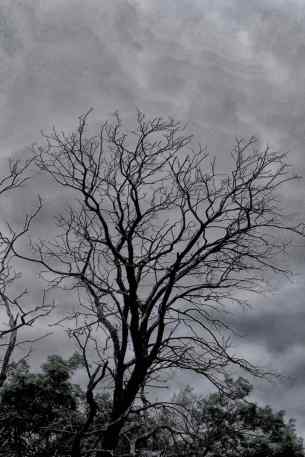 On the way to St Helens – still between the mountains

Our base for the next few days was a lovely cottage overlooking St Georges Bay, about 5km from the centre of St Helens and with a walking track around the bay at the bottom of the drive, what could be better?