Having left Strahan in the rain and dallied a little in Queenstown, we were on our way to Penguin, on Tasmania’s north coast and part of what the locals call “Cradle Country”, after the Mountain that dominates the scenery, Cradle Mountain. Our route took us close to the National Park that bears its name, which meant more hilly, twisty, gut wrenching roads, before levelling out and dropping just as dramatically, into the charmingly named Penguin. 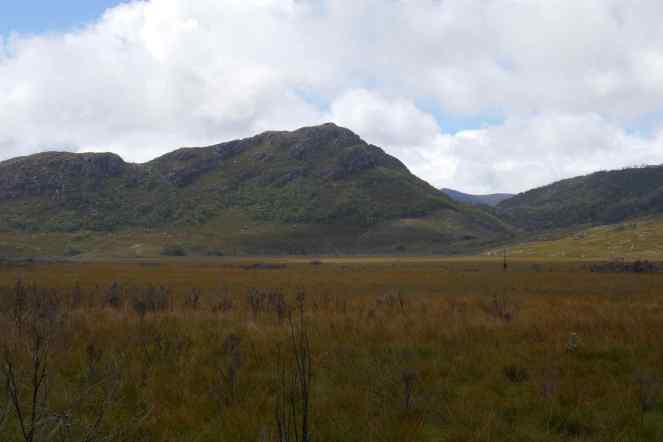 Collage of images from the drive to Penguin…….still in the mountains

Settlers first came to what is now Penguin around 1861.  It established itself as a timber town with the area’s dense forest and bushland providing a ready source of raw material for export to Victoria. It was one of the last areas along the North West coast of Tasmania to be settled, possibly because of an absence of a river for safe anchorage. The town was named for the colonies or rookeries of Little Penguins that were common in the less populated parts of the coast.  Some rookeries still exist along the coast, at Sulphur Creek and other places, but they have become something of a tourist attraction over the years as crowds come to watch them swim ashore at dusk having been out at sea all day feeding. 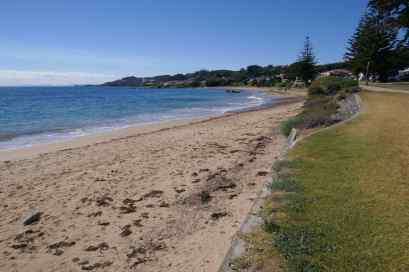 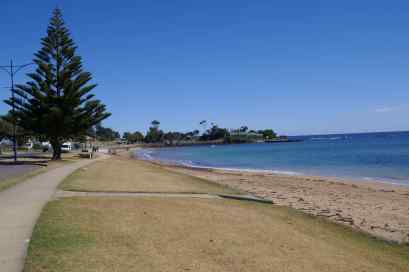 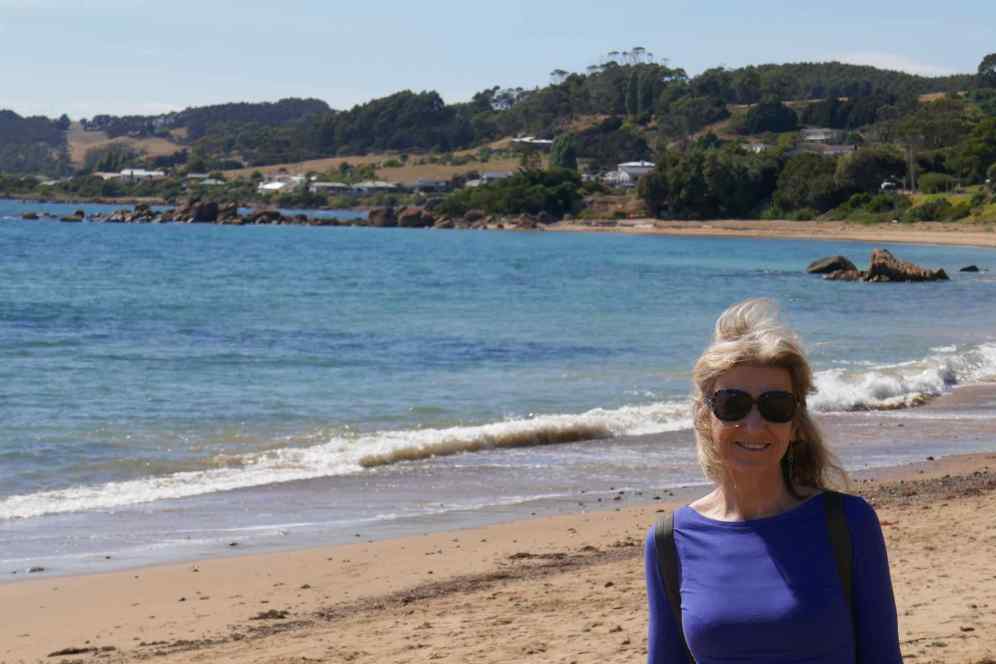 Our accommodation is located on the esplanade at one end of the village and has a sea view, of sorts.  We are on the first floor and have the roof of the ground floor apartment in front of us. Notwithstanding that minor irritation, it is an excellent apartment, large and well equipped and a view of the sea!

Our original idea when planning this trip was to use Penguin as a base to explore the Cradle Mountain and Lake St Clair National Park, however it soon became clear after we arrived in Tasmania that this was not going to be possible because of the Bush fires ongoing in the mountains.  So to plan B.

Lyn in the kid’s playground – Penguin 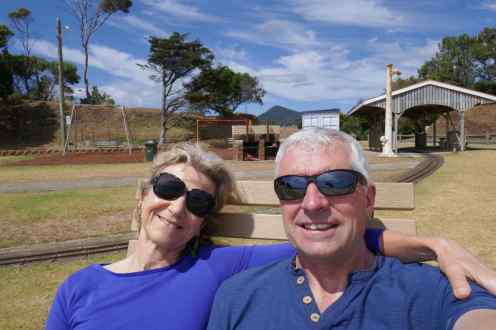 ……………and relaxing after a long go on the swings

After a morning walking the esplanade we headed off to Ulverstone a short drive up the coast to the east.  The first sign we saw was pointing to an “Art Gallery” so we followed the arrows and arrived at a large building with “Council Office” written on the front.  We wandered in and in a large hall were a group of retired ladies and gents sat round tables “doing stuff”.  Some were crafting, some ladies were sewing, the gents had their own table and were making models. They come together twice a week as a group to chat, do their creative thing and socialise. At this time, with loneliness so prevalent amongst many older folk, this brought people together.  These community “galleries” are quite common  across Australia, but I note that there is a growing “Men’s Shed” movement across the UK.

Maps of Australia made by the group to celebrate Australia Day 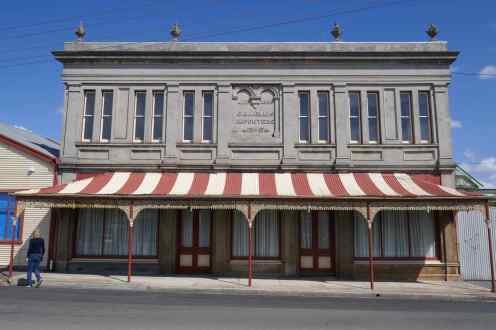 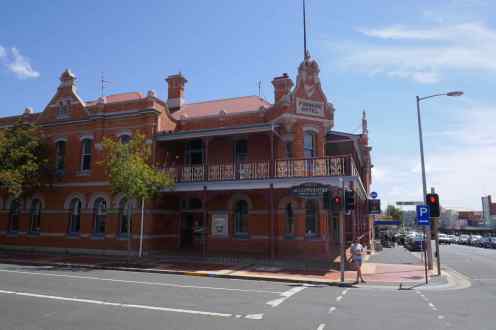 Two of the older buildings in Ulverstone

Close to the centre of Ulverstone is a large park, immaculately kept.  Part of it is known as Shropshire Park and is Australia’s largest Naval Memorial Park. It was initially built to remember  the men of HMAS Shropshire, a WW2 cruiser given to the RAN by the British in 1942 to replace HMAS Canberra, which was destroyed in action.  The park now stands as a memorial to over 100 Australian naval ships as well as to those who served. The path that takes you round the park leads to a very tranquil beach with a long breakwater.  As always, Lyn needs to know what is at the end (easy — water and the Bass Strait!) so she walked the length whilst I sat on the beach and watched sea birds strut around and generally annoy each other.

Clockwise from top left: Lyn walks the causeway; Causeway; Had the beach to myself; Empty beach

To the west of Penguin lie the small towns of Wynyard and Stanley.  Situated on the banks of the Inglis River, Wynyard has the impression of being slightly left behind compared to its neighbours. However, close by are Table Cape Lookout and a Lighthouse of the same name.  Table Cape is an extinct volcanic promontory about 3 miles from Wynyard that affords some stunning views of Tasmania’s north coast and out into the Bass Strait. The lighthouse was first lit in 1888 after many years of debate, building and funding issues.  It was the loss of the ship the Emma Prescott in 1867 which prompted the need for the the area to have some sort of visual warning.

Clockwise from top left:  Lyn at Table Cape Lighthouse; View along the clifftop walk; View from Table Cape Lookout; Looking back towards the Lighthouse

The fields around the Cape are used to grow tulips. In the springtime, the colours of the flowers must be amazing.  We were out of tulip season and have the bare earth, which, whilst attractive in its own weird way does not have the effect that a field of flowering tulips would have!  There is a clifftop walk between the lighthouse and the Table Cape Lookout, about 2km away which is also rewarding with lots of birdlife and natural flowers growing in the clifftop soil.

Lastly on our mini half day road trip we arrived in Stanley. Whilst Wynyard had a lighthouse, Stanley has its Nut.  The Nut or to give its correct name, Circular Head, is an extinct Volcano that rises up from the flat lands around.  Stanley is little more than a collection of cottages and shops nestling half way up one side of the Nut, with an active fishing harbour in the lee at its base.  Because of its exposed location, open to the Roaring Forties, it seemed perpetually windy but with the bright sun, it felt a glorious place to be.  A chairlift carries folk to the top, but there is a long and steep walk up, then the 45 minute walk around the edge.  We took the chairlift. The views were stunning all around, it is just a shame that, despite the wind and the bright sunny day, a low lying haze was restricting visibility.

Clockwise from top left: The Nut from the road in; Stanley Main Street; Anthony Bay x 2

Views from the top of The Nut

On top of The Nut

Having done coastlines, for our next trip we headed inland.  Our ultimate destination was the Leven Canyon but it had been suggested to us that we try out the cafe at Wilmot for coffee and cake, then take in the open garden in the wilderness about 20 mins from there.  With this in mind we headed off, driving into Wilmot about an hour later.  The place was very small and deserted, not a cafe in sight.  A quick call into the village museum revealed that, yes there was a cafe, but it had no seats and was the general store selling take away coffee only.  Hmmm  okay, not for us, but we knew that the gardens had a cafe so off we headed.

Yes, the gardens did have a cafe, but unlike anything we had experienced before.  The Gardens in question were owned and managed by a local farmer and his wife. The board outside suggested teas, coffees and light lunches were available.  We arrived and were shown into the cafe, which was more like their own front room with tables and chairs.  A TV screen on the wall played a continuous DVD of the flowers in the garden through the seasons; the backing music could be used for torture so dull was it.  We ordered coffee, there was no cake and the light lunch was Parsnip Soup……in high summer????  The coffee was instant and horrid.  We walked around the garden, which was well laid out, but most of the summer colour had disappeared or was dying off as it is now late summer here. Was it worth coming?  probably not, and we will not be recommending these gardens to anyone who visits Tasmania in the future.

Clockwise from top left: Panorama of Mount Roland range; The House and part of the garden; Lyn relaxes in a swing seat; Lyn in the garden.

Our ultimate destination for the day was the Leven Canyon. A short drive from the gardens, it had two walks from where we were parked, clockwise and anti-clockwise, both through the forest to look out platforms perched out over the canyon.  We elected to go clockwise so we set off down a very steep path through the forest.  About  30 mins later we arrived at the steel platform erected out over the canyon.  Both sides were almost vertical yet were completely forested.  The river flowing through at the bottom was very low but despite that the views were excellent.  We lingered there a while watching and photographing before retracing our steps for a short while before starting the climb up to the second lookout a little further up the canyon.  15 minutes and 697 steps later we reached the second lookout which was even further out into the canyon! After that climb, the walk back to the car was easy!

Views of Leven Gorge from the lower viewing platform

Clockwise from top left: Lyn climbs the 679 steps; More steps; Lyn at the upper viewing platform; A rest bench with how many to go and how many you have climbed.

Like nomads, we never stay in one place for too long and  we prepared to leave Penguin for the short drive to Deloraine.  We had thought of stopping in Devonport en-route but that did not look very appealing.  It is the ferry port destination for the Tasmanian ferry that sails between Melbourne and here.  Instead we elected to make our way directly to Deloraine which seemed to have much more to offer.

On a whim, we stopped in Latrobe for coffee.  A country town with some attractive old buildings, it has suffered badly with the closure of many local industries including mining and the wood mills.  It had a moribund and careworn feeling and was clearly in need of some investment, as was one of the characters who came into the coffee shop.  He pulled up outside in his dusty battered old Ute and got out of the drivers door.  He was wearing a pair of tight, old denim jeans pulled up under his large pot belly and these were held up with a wide leather belt and yellow shoulder braces. Under his braces was scruffy long sleeved yellow and red check shirt with the collar turned up at the back to protect his neck.  His large round face was sunburned and brown at the same time and he had two days stubble growth on his chin.  This image was topped off with a worn leather hat that was straight off the set of Crocodile Dundee!  He looked just like he had just come in from a week in the bush.  Welcome to Latrobe!

Lastly, two facts about Latrobe; It has a chocolate factory specialising in Belgium chocolates (is that allowed, Australians making Belgian Chocs?) and The Australian Axemans Hall of Fame showcasing Australia’s wood-chopping sporting champions is located in Latrobe. Only the Australians could make a sport out of chopping wood!