Why visit Jasper in early Autumn?  It is the end of the summer season; one local  shopkeeper told us that “…….in a month’s time summer will be switched off and winter will start, almost overnight”

Our reason for being here is that it is the start point for our two day journey on “The Rocky Mountaineer” a classic train journey through the Canadian Rockies, with unparalleled views of the Rocky Mountains.  I wish someone had told the weather gods this tag line, because when we awoke on the Sunday morning all that could be seen was low cloud and rain.  The company offers four journeys, and ours was named “Journey Through The Clouds”.  Given the weather, I could not think of a more apt title!

We gathered very early in our hotel reception and were transported the 1.4km to the rail station to board our train.  We had allocated seats in one of the Goldleaf double decker carriages, which meant that our seats were located on the upper deck, whilst there was a dining area on the lower deck.  Our coach was also blessed with a glass roof and viewing platform, to afford a better around view of the scenery.   The leather seats were very comfortable with plenty of leg room, fully adjustable and heated, should we get cold. 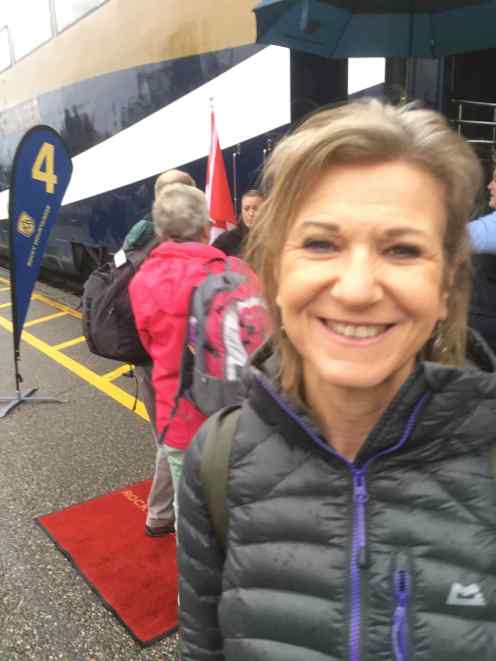 Left:  Lyn ready to board.  Right:  Lyn takes her seat

There is no schedule with this railway journey, “we depart when we are ready” said one of our Rocky Mountaineer (RM) hosts, Erin. The hosts have a dual role on board.  As well as the standard safety and service role, they also provide information of sights and views en-route.  They also share anecdotes and terrible jokes to try and keep us passengers amused.

The tour is run by a private company and the train makes no stops en route to Kamloops, sharing the line with the Canadian Pacific railway, and Canadian National Railway whose freight trains we occasionally have to stop to let pass.  The atmosphere on board is relaxed as we role out of Jasper, a train of 15 coaches, and head slowly into the cloud covered mountains.  Time is not of the essence with this train, it moves along at a sedate pace, giving time for its passengers to enjoy the scenery.

The train runs close to the highest point in the Canadian Rockies, Mount Robson but as with most sights today, the mountains are obscured by clouds.  Before that point, despite the poor weather we had an extended view of Yellowhead Lake and Moose Lake both mountain lakes with blue/green waters common in this area and rich in Rainbow trout.

As we crossed the Fraser River, we were called down to breakfast.  Meals are served in two sittings, and we are first up on day one.  Tables are set for four people so you end up sharing with complete strangers.  It makes for interesting times as you find out about your travelling companions.  The idea is that you do not sit with the same couple each time.  At our first breakfast we were joined by an older couple. In conversation it came out that he was a High Court Judge, and she was a retired horsewoman, having competed at a very high level many years ago. At lunch on the first day we were joined by and Australian lady and her partner from New York! They revealed that they live in Geelong, near Melbourne, a place that we are familiar with. We also shared meals with travellers from , Solihull and Horsford near Norwich! Come all this way and meet folk from nearby.  Mind you we did hear of another couple from Wymondham in our carriage, but never got to meet them! It made meal times a very fun and interesting experience!

Each pair of seats has a free newspaper called the “Mile Post” which has descriptions of each of the routes operated by RM and locations of photo opportunities together with short articles about some of the sights we should see en route to our eventual destination of Vancouver.  I noted that at one point we would pass a station called Boulder, which was named for the stone boulders scattered through the area.  The guide goes on to say “To the east is Baldy Mountain, 7544 ft high, whose top is bare rock with no trees or other growth!” Sounds like a few people I know! Although by this time the weather had improved the top of Mount Baldy still proved elusive.

Top:  Pyramid Falls.  Centre: View from the back of the train. Bottom: More low cloud

We eventually rolled into Kamloops at around 4-30pm, about an hour ahead of plan  (how many UK trains can say that!).  We were met at the station by a fleet of coaches and moved to our hotels.  Our luggage had been brought earlier and awaited us in our rooms. All part of the service!

Kamloops is a city of around 100,000 people and sits at the confluence of two branches of the Thompson river, of which we had seen much on our journey today. It’s origins, like many towns in this area began with the 19th Century fur trade but it has evolved through the gold rush of 1860 and the construction of the Canadian Pacific railway into the modern rather stark city it is today.  The industrial landscape is dominated by a massive paper mill, but it is also known as the Tournament capital of Canada because the city pays host to over 100 different sporting tournaments each year at world class facilities.

Clockwise from top left:  Me ready to board for day 2; Leaving Kamloops; Kamloops River; Our train has grown – to 26 carriages

Day two of our meandering journey to Vancouver saw an improvement in the weather, and the hope that we may see some sunshine before the days end.  The landscape has also changed.  Gone are the rich verdant green mountainside forests, to be replaced by a drier, slightly flatter, more arid landscape with low growing hardy bushes more suited to the Australian bush than the Canadian Rockies.  The overall climate to the west of the Rocky mountains is mild and the city of Kamloops sits in a large rain shadow so is consequently drier that the Rockies to the east.

Once again our hosts kept us well fed and informed as we headed thorough the ever changing landscape. As we rolled on towards Vancouver there were many photo opportunities including The Jaws of Death Gorge,  Avalanche Alley, Rainbow Gorge – so called because of the colour of the rock –  and the Black Canyon Tunnel.

In the midst of all this, the hosts continued their excellent work.  As we were second sitting on Day 2 we had a chance to sample some local Canadian cheeses in a pre-lunch Wine and Cheese party.  Accompanying this were a couple of Canadian folk songs (recorded) and finally that well known Canadian (not!!) Neil Diamond singing Sweet Caroline, the chorus of which was given a rousing rendition by the remaining occupants in our carriage who were not at lunch!

We moved once again from the arid landscapes of Kamloops to the gentle rolling hills of the North Cascade range close to Vancouver.  The climate is more temperate in this area and it is a fast growing and popular Canadian Wine region.  With the image that Canada has for being warm in summer yet freezing cold in winter, it seemed odd to see fields of grapevines thriving in this area. 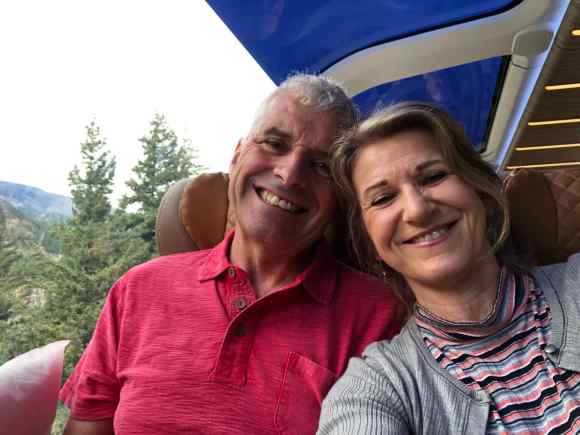 We finally rolled into the RM depot in Vancouver just before 6pm.  Again the slick organisation from the Rocky Mountaineer team came to the fore.  Alongside the platform 18 coaches were lined up, ready to take us and our luggage to our respective hotels.  Cases were in the central hall for us to locate and deliver to our coach.  We said our farewells to our hosting team and headed for the coach.  Our hotel in Vancouver is in the centre of town close to shops and restaurants, however because of our late lunch sitting neither of us were hungry, so well had we been fed, so we just kicked back and chilled, reflecting warmly on a brilliant train journey.