I am not about to write a critique about the Eagles album of the same name, but this is about a week away for us in the lovely village of Usk on the border of England and Wales.

Usk sits on the river of the same name and is located in the south east corner of the Principality about 10 miles north of Newport in Monmouthshire.  To the east is England and Gloucestershire and to the west lie the Black Mountains and the Brecon Beacons of Wales, noted walking areas.

The towns origins date back to Roman times but it was the Normans under the de Clare family who first laid out a planned village and built Usk Castle which still stands today, being one of the few in the country which is privately owned and occupied. Usk has seen its fair share of turbulence especially around the Welsh Revolt in the 14th Century but today it is an oasis of peace and quiet, noted mainly for its pubs, restaurants and antique shops.

Images from the village of Usk

Lyn by the River Usk

We are here to catch up with friends living nearby and also to walk in the Brecon Beacons and the surrounding area.

A short distance to the north lies the town of Abergavenny and near to there is a hill standing alone which marks the eastern edge of the Brecon Beacons National Park. Ysgyryd Fawr, or to give it its English name The Skirrid, which is much easier to pronounce. The distinctive shape of this Old Red Sandstone hill comprises a long ridge oriented nearly north–south, with a jagged western side resulting from ice age landslips. From the car park at the base it is a short but steep climb to the summit, but the views all around from the top are breathtaking, even though it is only around 1500ft high. To the west is The Sugarloaf mountain and to the east the Cotswold and Malvern Hills.

Top: Looking back down the woodland path up to Skirrid; Centre:  View of The Sugarloaf Mountain from Skirrid; Bottom: View east towards England.

We enjoyed a pleasant afternoon walk in the strong wind and sunshine, taking in the awesome  views from the top before making our way down via a circuitous, slightly muddy route.

Close to Usk is the county town of Monmouth and overlooking the town to the east is a lone hill called The Kymin. Atop this hill are two neo-classical monuments, the Roundhouse and the Naval Temple both built built between 1794 and 1800.  The Roundhouse was built by a group of local business gentlemen who enjoyed regular picnics and meeting together.  So legend has it, after several encounters with the changeable weather in the area they decided to raise funds for a banqueting house at the top of the Kymin so the concept of the Roundhouse was born.  It, together with the adjacent Naval Temple have been there ever since, though the Roundhouse has long since ceased to be a banqueting hall.

Clockwise from top left:  The Roundhouse; View of Monmouth from Kymin; A local Robin joins us for coffee; Offa’s Dyke path

The Naval Temple was built in 1800 by the same men who built the Roundhouse, to commemorate the second anniversary of the British naval victory at the Battle of the Nile in 1798, and in recognition of sixteen of the British Royal Navy’s Admirals who had delivered significant victories in other major sea battles of the age around the globe to that date. It is an odd place to site a Naval monument but it is reported that Admiral Nelson visited it and commented that “it was the only monument of its kind erected to the Royal Navy in the Kingdom” at that time.  Whether he was impressed with it was not recorded. 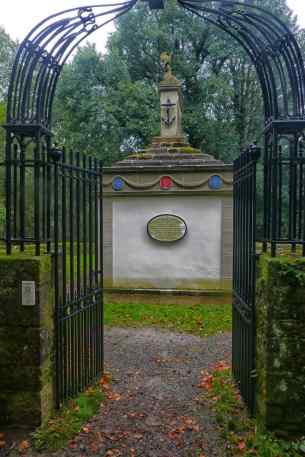 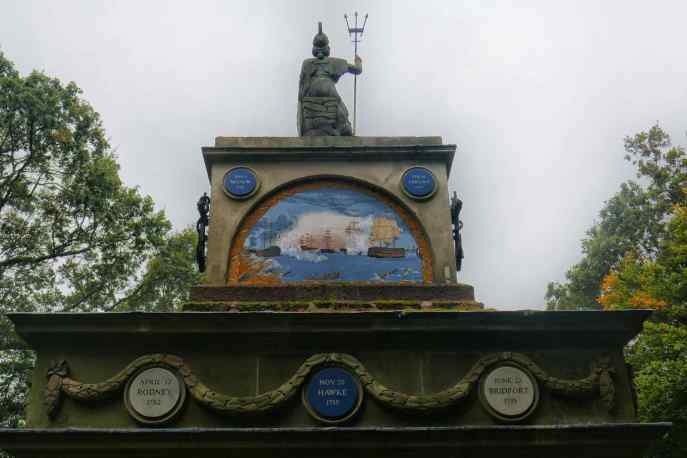 The Naval Temple at Kymin

Top: All wrapped up and somewhere to go!  Bottom: Us on the Westwood Forest Trail

As mentioned above, The Brecon Beacons is a noted and popular area for walkers, who share the hills with the British Army who use the area for military skills training.  One of the most popular walks is The Brecon Horseshoe, which takes in Corn Du, Pen y Fan, Cribyn and Fan y Big. The weather forecast for our walk was not promising, showing a brisk breeze, sunny intervals, and in the understated way of meteorologists, occasional showers.  The reality was a little different.

By the time we got to our start point at Taf Fechan, the blue skies had all but disappeared and the wind, was a lot more than a stiff breeze.  We had been walking for about five minutes when it started to rain, but we persisted.  So did the rain, and by the time we had reached our first way point of a dam with two empty reservoirs, we decided to take shelter, have a coffee and debate whether to persevere. 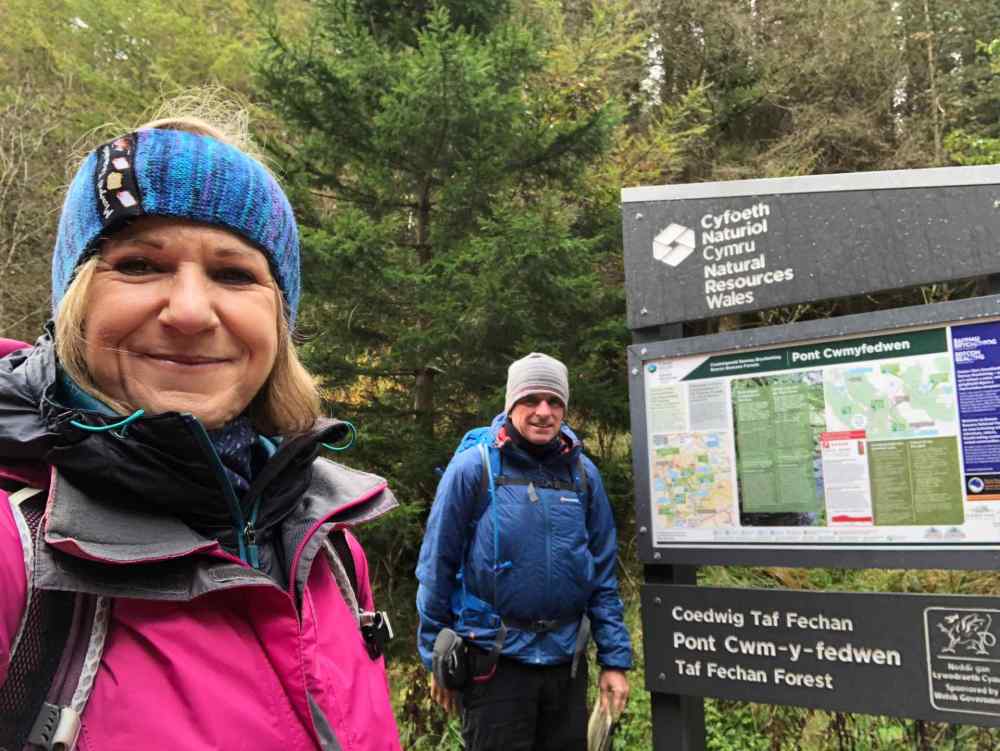 Us at the start of our walk

Clockwise from top left: Lyn sets off ; Taking shelter – Looking at the path we have to take to the ridge; On the Ridge; Lyn on the ridge.

The weather eased a little so we embarked on a steep climb to meet the Graig Fan Ddu ridge which runs south to north above the valley.  From here it was, in theory, a flat walk which should have given us a fine view of Corn Du and Pen-y-Fan.  What we actually saw was 30mph cloud covering the ridge top with an accompanying heavy shower. (At least the Met person got that bit right!) with occasional glimpses of our target mountains in the distance.

We followed the trail, rarely seeing clear sky and eventually came to the end of the ridge.  We followed the path down to our first mountain, Corn Du.  By this time the temperature had dropped, we had experienced a hailstorm, and the wind had picked up even more. We chose not to take the high, return path, but follow a lower route half way up the valley side which would eventually lead us back to the car park.  By the time we got back it was raining hard again as we set off on the drive back to our cottage.

Clockwise from top left:  Lyn celebrates seeing the sun; Wild welsh ponies; Looking back to Pen-y-Fan and Fan-y-Big; The path up to Corn Du.  Shortly after we were hit by a hailstorm from behind us.

Left: Lyn Adds a stone;  Right: Me on the ridge

I commented to Lyn that I have never been to Wales and not got wet, even on family holidays as a child, Wales was always that wet place!  The walk itself offered glimpses of amazing scenery in between the speeding cloud, and would be worth returning to, on the condition that there was the promise of guaranteed sunshine! Let us hope that the weather improves for the remainder of our week.